Giovinazzi: I know there’s a lot of rumours already 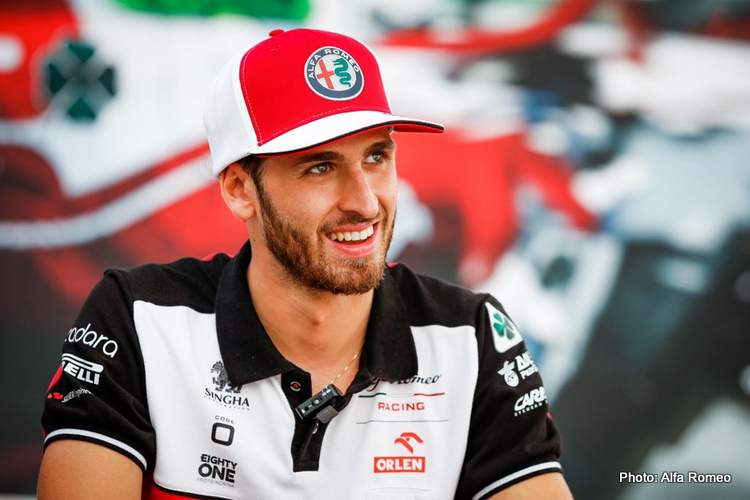 Antonio Giovinazzi’s seat in the Alfa Romeo team beyond 2021 is up for grabs, but he is ignoring the rumors, intent on performing in the remaining races to impress his bosses, and while the Monza weekend started well, it ended badly for the Italian.

With Kimi Raikkonen retiring at the end of this season, Alfa Romeo have signed Mercedes driver Valtteri Bottas to replace him but no second driver had been confirmed. However, team boss Fred Vasseur said several drivers are under consideration including Giovinazzi, who knew he was being watched for the next three or four races.

The Italian Ferrari-backed driver has had to up his game and did so last weekend by qualifying tenth for his home race and then finishing eighth in the Sprint Race, which became seventh on the grid after pole-winner Bottas took a grid penalty.

Thus the stage was set for Giovinazzi to deliver an unforgettable performance that would keep him in the running. But that dream took a hard knock, as the incident prone driver was involved in a first-lap fracas of his own causing and spent the rest of the race playing catch up to finish 13th.

He reflected on a disappointing Sunday at Monza: “It’s a pity to have such a strong weekend compromised by an incident in lap one. I went a bit wide at the second chicane, jumped on the kerbs and then I had no control over the car.

“After that, it was just a difficult race: I had damage to the floor and it was just very difficult from the back. It’s frustrating, especially knowing how our pace looked and where the cars that were around us finished. I wished for more for my home race in Monza,” lamented Giovinazzi.

During the weekend on home soil, the 27-year-old was asked by reporters about his future to which he replied: “Nothing yet, I have no news yet, I just knew that Valtteri will be in Alfa next year but from my side no news yet. Of course, I want to know as soon as possible but it’s not my decision.

“I know there’s a lot of rumors already but it’s not my decision so my focus is more on my performance, to do my best result in the race and in qualifying and everything and then see what will happen.

“Of course, we want all the same: to bring the best result possible for the team you know, qualifying to be in front, race to get points. It is clear from my side and from Fred’s side what we want.”

The reality is that Giovinazzi has mainly disappointed in his 54 starts in the top flight, accidents aplenty and no spark from a driver who struggled to match a teammate well past his best, and 14 years his senior.

His performances should be measured in the context of younger rivals including the likes of Max Verstappen, Lando Norris, Charles Leclerc, Pierre Gasly, Esteban Ocon, and George Russell who are the benchmark for the new F1 generation of drivers and the future of the sport.

Giovinazzi has not shown that he is at that level on a regular basis that is required of a top driver, yet he has a great deal of support in Italy, even being presented with the prestigious Bandini Award in 2019.

So much so that ACI chief Sticchi Damiani is lobbying the Italian government for financial assistance to keep Giovinazzi in the top flight: “He is a great driver and we have not yet been able to give him that opportunity to truly show his full potential.

“I hope that the Italian Government takes into account all those values of Antonio Giovinazzi and moves some cards around, something fundamental so that he gets the help he needs. We are talking, of course, about the suitcase with the necessary amount for him to continue in F1.

“Today, it is not like in the past in F1 when good drivers had no problems to keep on racing. The one who is really worthy of course keeps going, but also the one who has more money in his bank account to contribute to the team.

“It is our obligation to defend Antonio Giovinazzi and give him the opportunity to continue in F1 to allow him to show his true potential and evolve as he deserves,” insisted Damiani.

Meanwhile, Ferrari are forking out the privilege (cash or PU barter) to keep Giovinazzi in the Alfa Romeo seat, but the ultimate decision rests with Vasseur and the Swiss team according to Mattia Binotto.

The Ferrari team principal explained: “I think that’s really a choice of the team. The teams are really independent on the choice of their drivers, which is important for us as well. It’s clear as well that Antonio for us, he’s our reserve driver.

“He’s an Italian driver, he’s part of the Ferrari family, he’s a Ferrari driver, so for us it will be great to have him still driving next year. We believe he is a good driver and somehow he deserves to have a seat next year. But as I said, we cannot influence the team decision,” added Binotto.

With 19 of the 20 seats on the 2022 F1 grid pretty much confirmed, Alfa Romeo hold a handy card and are probably in no rush to make a decision, which might provide Giovinazzi with a chance to redeem himself but the smart money is on him not remaining in F1 beyond 2021.