Grosjean: I see myself staying in Indycar for some time 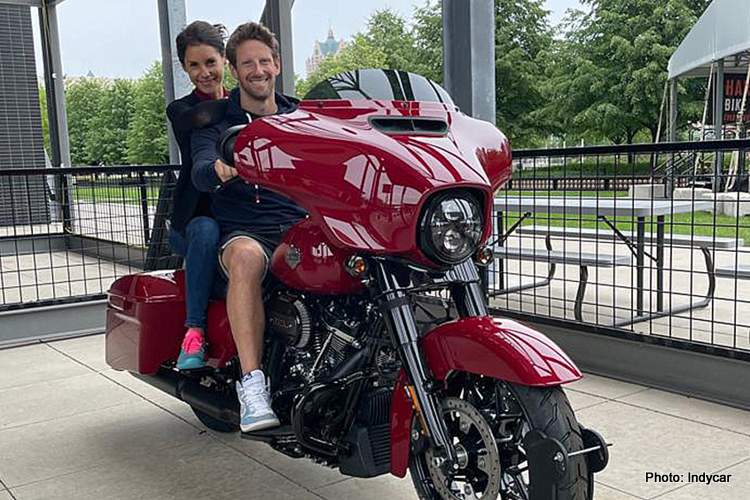 Romain Grosjean, the former Formula 1 driver now racing in the USA, who lives in Geneva, is spending his four-week break between NTT Indycar Series races on vacation.

Considering he lives between three mountain chains in Switzerland and is an avid kite surfer, you might expect the NTT Indycar Series rookie to be spending his time somewhere exotic. Somewhere unknown. Somewhere unique.

Not this driver. Instead, he and his family have been on a motorcoach tour across the midwestern United States. While that doesn’t sound exotic, unknown or unique to many Americans, Grosjean, his wife, Marion, and their three children are in awe of the places they’ve seen:

Those are the cities and regions on the Grosjean family’s travel list this summer. When they’re not travelling, they park their RV – nicknamed “Raoul” – inside the Indianapolis Motor Speedway and lay low inside the famed 2.5-mile oval.

“It’s just a great atmosphere and a great adventure to be every day at a different place,” Grosjean said, whose family, “Absolutely loves it. For us, everything is new. It is a different atmosphere, a different landscape, different dialect, and as I say, we’ve only been in a small part.”

The former Haas said he’s enjoyed visiting each place, but Chicago topped his list. He enjoyed the atmosphere of the third-largest city in the United States and took a boat tour through the Chicago River that explained the history of the city and its architecture.

The Grosjean entire family also enjoyed taking a ferry across Lake Michigan, with his children amazed at being able to drive the RV onto the boat for it to haul across the massive lake.

They’ve also taken a unique liking to baseball and spending an afternoon in batting cages. Grosjean said his kids already want to sign up for baseball lessons if the family moves to the United States, and he said he’d like to sign up alongside them to learn how to play a sport he knows little about.

For his wife, Marion, Grosjean said she’s been blown away by the hospitality of the Midwest. The family has received a warm welcome in each city they’ve visited.

“People have been very, very friendly in the Midwest,” he said. “That’s one of the things we’ve been amazed by, especially my wife, is how friendly people are around here. She’s been really amazed by the kindness of the people everywhere we go.”

Until then, the Grosjean family will continue to tour the Midwest and find new places to experience within a short drive from each other, which is great with three young children. Grosjean, 35, said the massive size of the United States compared to the smaller European countries he’s used to has been the biggest surprise and how, relatively speaking, they’ve experienced very little of the country.

Because of that, Grosjean is already looking forward to the day his kids are older, and he can take them out west to see national parks such as Yellowstone, Yosemite, the Grand Canyon and many more.

Grosjean will get a small dose of the western United States when he drives his RV from Portland International Raceway to WeatherTech Raceway Laguna Seca and then Long Beach over the course of the NTT Indycar Series’ West Coast swing to end the season Sept. 12-26. Grosjean intends to stop at vineyards in Napa Valley and go kite surfing in the Pacific Ocean.

While Indycar is based in Indianapolis and many of the tracks are in the Midwest, Grosjean said their summer tour of the region wasn’t necessarily a glimpse of where he and his family might want to live, should Grosjean go full-time NTT Indycar Series racing in 2022.

Grosjean told the media in May that he and his family were in the market for a home, and he reaffirmed that with his plans to live in Miami.

“The rough plan would be if we come in the U.S. to come to Miami,” he said. “I’ve got a few friends down there, it’s got a direct flight to Paris where my wife still works, so that will make our lives easy. Obviously, an important thing is school for the kids. It’s not yet set in stone.

“Hopefully it will start moving one way or another soon, but right now nothing is done. But yes, it’s definitely an option. I see myself staying in Indycar for some time,” added Grosjean (Report by Zach Horrall)