Grosjean: Those who think ovals are easy are wrong 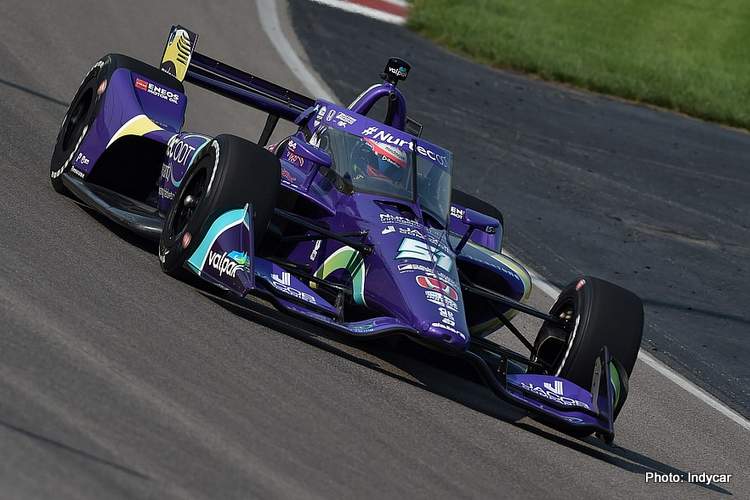 Crash-prone ex-Formula 1 driver Romain Grosjean had his first taste of driving an Indycar on an oval at race speeds, emerging from the experience with a newfound respect for the art of turning left.

The Frenchman, whose F1 career came to a fiery end when he crashed his Haas during last year’s Bahrain Grand Prix. Since then he has embarked on an Indycar career, focussing on road circuits with Dale Coyne Racing.

The test on Tuesday at World Wide Technology Raceway (Gateway) was his first on an oval amid his first season in America’s premier single-seater series.

Grosjean told reporters afterwards: “I kept it in one piece on the track, which is good! Obviously, I have a lot to learn because it’s different from anything I’ve done before, that’s for sure.

“Those who think oval racing is easy are quite wrong. It is complicated and there’s a lot you can do with the car. I was one of the first ones to think: At ovals, you just turn left and it’s flat-out through corners.

“It’s very interesting how the setup should be. They all say the car should be driving itself, and you think: What are you talking about?!’ – I’ve never done that in my life! But by the end of the day, yeah, I was very happy with what the car was doing, in a long run and in traffic.

“I was just trying to get my feel on ovals. On ovals, you can really feel a setup change every time you go out. You can be 1.5mph off and you think: Okay, there’s no way a small change on the car can find that time because you need confidence and everything that goes with it,” explained the 35-year-old.

Grosjean is set to make his oval debut at Gateway next month with a plan to compete at next year’s fabled Indianapolis 500: “This was one test day and the race is always going to be something else. I need to learn about racing in a pack on ovals. Conditions are going to change.

“So I wouldn’t say I come in with confidence but I come in prepared and knowing what the car needs to be able to do for me to go fast,” he explained.

Asked why he chose Gateway for his first oval test and race, Grosjean replied: “It’s a short track and I felt like we were slowing down more in the corner and actually braking for Turn 1. And I felt like: okay, if there’s braking and it’s a bit more like a road course-type circuit I may give it a go. That’s what we’re here for.”

Grosjean’s Indycar rookie season has hardly been stellar, second place at Indianapolis Motor Speedway (road-course) his best result to date. He lies 16th in the Indycar series standings, the second best rookie behind Australian Scott Scott McLaughlin but ahead of Jimmie Johnson.

The NASCAR legend, who is also contemplating an oval programme, kept a close eye on Grosjean’s induction ahead of his own oval test next month.