Marko: Next weekend should be even better for us 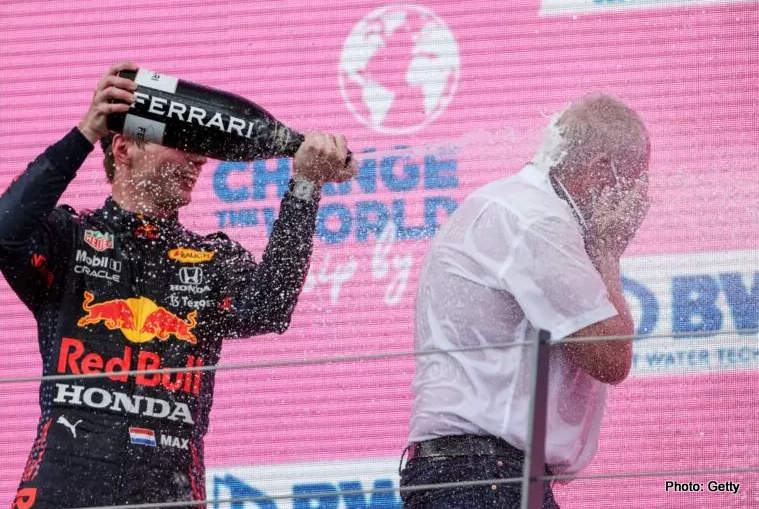 And boy did he get drenched, but his presence there was a reward for the former F1 driver and Le Mans winner’s role in Red Bull’s emergence, this season, as a proper title contender from the get go, for the first time in almost a decade.

In Marko’s eyes, young Verstappen can simply do no wrong, the Austrian has for long been his greatest ally, as well as mentor, whose unwavering belief in the Dutchman is paying dividends for the team.

Speaking after the race at Red Bull Ring on Sunday, and a thorough drenching on the podium, Marko told De Telegraaf: “This was a great victory for Max. He’s flying this year. In fact, we controlled the race easily.”

So easily that the Styrian Grand Prix turned out to be a rather dull affair, with Verstappen controlling things at the front, while his title rival Lewis Hamilton chased hard all day, but in the end the Red Bull driver doing the business.

The F1 circus remains at Dietrich Mateschitz’s Projekt Spielberg venue for this weekend’s Austrian Grand Prix where it will be much of the same, except for tyre compounds going softer for round two at the same place.

Marko pointed out: “We will race here again next weekend and the only thing that will be different are the tyres. They will be a bit softer then and that should be even better for us.

“[In the race] we had much less tire degradation than both Mercedes drivers. It is clear that we have a chassis and engine package that will allow us to challenge Mercedes.

“There are definitely still circuits where they will be strong, but this week we should be in the same position. With a bit of luck, we will go 25 points ahead of the next race at Silverstone.”

Mercedes have never suffered four Grand Prix defeats in one season since the advent of the second F1 turbo era in 2014; this year Red Bull have upped the ante with a package ready to rock-n-roll from day one and their ace 23-year-old driver getting stronger with every outing.

They are sniffing a title and most importantly, end the dominant reign of Mercedes.

Explaining the turnaround, Marko said: “We learned from our mistakes. Mercedes made such a step with the engine last year, but Honda responded this year. As far as power stakes, we are more or less equal. The difference is the car itself was competitive from day one.”

With the pressure ramped up, the Mercedes are on the ropes for the first time in this era and are always quick to trumpet their own shortcomings, but they are also very much at the sharp end of political shenanigans according to Marko: “Top be polite, they do very funny things.

“They complain about our rear wing, about our pit stops and about anything and everything. If Mercedes doesn’t do it themselves, they will use a team like Aston Martin for it. We focus on racing and try to make sure nothing stops us.

“Mercedes is now missing the 50 horsepower advantage they’ve had for seven years. But the fastest car on the straight was now the McLaren, with a Mercedes engine. They are not used to this situation,” ventured Marko.