Verstappen: I’m sure it will be very tight again 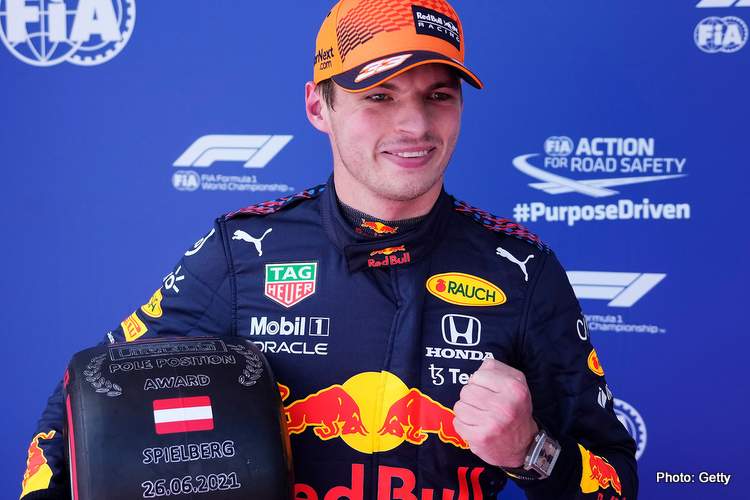 The Red Bull driver is in his finest form, able to reach deeper than his rivals as he extracts the maximum from the RB16B, which is a proven race winner and a real title challenger for the first time in his career.

At his team’s home track, Verstappen was the only driver to dip into the 63-seconds zone around Red Bull Ring in qualifying on Saturday, a couple of tenths better than the best Mercedes at one of the shortest tracks on the calendar.

Both his laps in Q3 were faster than anything Mercedes could muster on the day.

Notably, he was three-tenths of a second upon Sergio Perez in the sister car, proof that the Dutch driver is on another level in Spielberg this weekend, setting himself up as the favourite for victory in the race on Sunday.

Speaking in parc ferme, after securing his first-ever back-to-back top spot start in F1, Verstappen said: “It has been a very good weekend.

“Around here you don’t have many corners but it is actually quite hard to nail the lap because of the braking up to Turn 3 and 4 where it is easy to lose a tenth if you make a tiny mistake.

“When I started driving in F1 this was always one of the tracks that I felt good at and as there aren’t many corners the driver can make a big difference, which I like. Some tracks are pretty straightforward on how you take corners but here there are a few options for that which makes it more enjoyable.

“Again in qualifying the car was really good to drive. It’s not easy to deal with the traffic in the last few corners to get a clean run, but that first lap in Q3 was good enough in the end. A good first sector.

“Super happy to be on pole here at home. It’s always nice to see a Red Bull car first here and I expect it will be super tight again.

“We know Mercedes have a strong race car and they are pretty good on the tyres so it will be very close, which is also good for the fans and the way everyone likes it. Hopefully as interesting as in France.”

In France, Verstappen delivered a masterclass in hunting down Lewis Hamilton to claim an important victory last Sunday, to make it three-three between the pair; tomorrow’s Round 8 is set to be a tie-breaker unless someone else gets a look in as Perez did in Baku.

Although Mercedes’ Valtteri Bottas was second fastest, he drops down three grid places for an FP2 penalty which promotes Hamilton to the front row alongside Max, as they were in France a week ago. (Additional reporting by Agnes Carlier)