Mercedes: We eventually didn’t get the wheel off 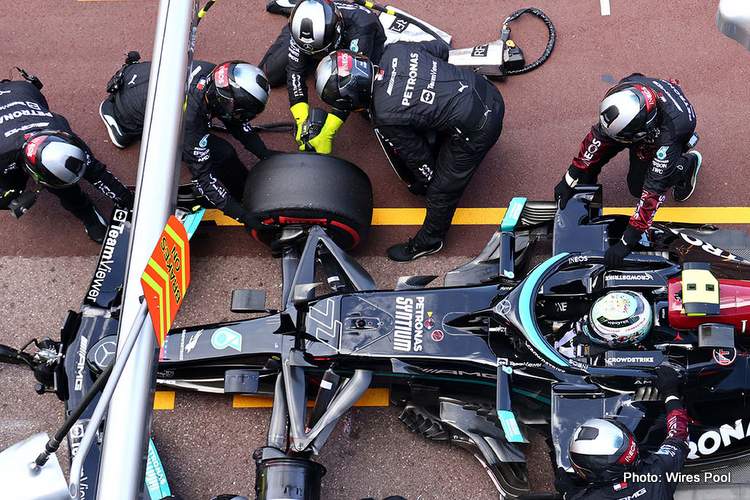 Mercedes driver Valtteri Bottas was heading for a Monaco Grand Prix podium on Saturday, until his pitstop when the right front wheel refused to let go of the hub and remained forged as one… until now!

It was a bizarre scene at the first round of pitstops during the race, as mechanics swarmed around the stopped Mercedes to try and remove the wheel, but to no avail. It was a DNF for the luckless Finn.

Mercedes tech boss James Allen confirmed that wheel and axle remain solid: “We eventually didn’t get the wheel off. It sat in our garage with the wheels still on it. It will have to be ground off, get a Dremel out and painfully slice through the remnants of the wheel nut. We’ll do that back at the factory.

“It was a more extreme repeat of the thing we’ve talked about in public before, which is if we don’t quite get the pit stop gun cleanly on the nut, then it can chip away at the driving faces of the nut – we call it machining the nut.

“If the gun starts spinning and chipping off the driving faces of the wheel nut, then in quite short order, given the violence and the power of the gun, you can end up with no driving faces and you’ve just machined the nut down to a place where there’s nothing left to grab hold of. And that’s what we had,” added Allison.

The incident cost Mercedes dearly, having arrived in Monaco with Lewis Hamilton enjoying a handy points lead after four rounds in this year’s F1 championship and his team topping the constructors’ standings. But by nightfall on Sunday they trail on both fronts as Red Bull capitalised on their misfortune.

For Bottas, it was another case of ‘Why me?’ as a podium went begging while he chased eventual race leader Max Verstappen. Allison reported: “His first stint was fine, he did a good job, looked after the car as best he could.

“With the nature of this circuit, there was never going to be an overtaking opportunity, and the only question is what sort of pace are you going to have left to play with around the time where you’re deciding whether it’s undercut or overcut time.

“He did a good job of leaving us with an ability to protect the second place with a car that was never going to challenge Max today for first. So he did a good job and would have had a comfy run to second without the failure in the pit stop,” explained the Mercedes man.

Bottas said of the saga: “Sitting in the car at the pit stop, I knew it was a slow one and I was calculating Sainz getting past, then Norris, and when it got to 30 seconds, I couldn’t believe it.

“It’s obviously hugely disappointing and we need to learn so it never happens again. It was bad luck from my side and as a team, it will be a priority for us to improve our pit stops moving forward.

“Our pit stops haven’t been our strongest point this year – there’s no one to blame, as a team we just need to be better,” said Bottas, whose pointless Sunday in Monte-Carlo resulted in a drop to fourth place in the drivers’ standings after five races.

Big debrief planned for today, lots to talk about and to learn from.

This championship is going to go right down to the wire, and we can't afford weekends like Monaco.

We promise you, we're up for this fight 💪 pic.twitter.com/bcHlU42B1y