Bottas: It was completely Russell’s fault 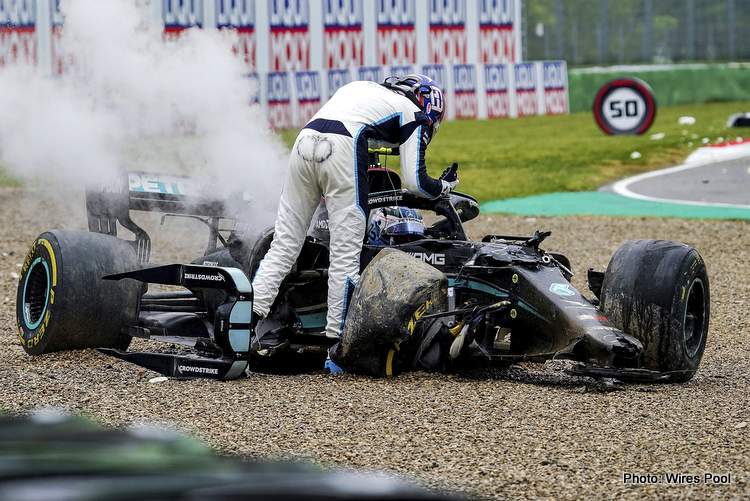 Valtteri Bottas is adamant that Geroge Russell was fully responsible for the high-speed collision between the pair during their battle for points during the 2021 Emilia Romagna Grand Prix at Imola on Sunday.

The pair made contact as they approached the Tamburello complex on lap 32, the Williams with DRS wide open collided with the Mercedes when Russell opted to go the long way around Bottas on defence.

The Williams on the wet tarmac, clipped the grass and slammed into the Mercedes, shattering both cars which ended up into the sand. The race over for them there and then.

Bottas told Sky F1: “It was quite a big one. It could have been a lot worse. I am OK. I was still struggling with the tyres. George got close he went for overtake in a place where there is only one dry line. I have seen the replay. There was definitely space for two cars. It was completely his fault.

“I could see him on the straight and then I noticed that he had moved to the right, on the replays I could see that there was room for two cars but he lost control and hit me – game over.”

An emotional Russell asked if Bottas was “trying to kill them both” believing the Finn to be at fault due to the fact that the young Briton is the prime candidate for Bottas’ seat with the World Champions.

Bottas said in the team report: “I’m okay physically. It was a half-decent shunt but obviously could have been a lot worse at that speed. George got close and decided to go for a move.

“Obviously the track is quite narrow, there is only one dry line and he went for the outside, there was space all the time for two cars but he obviously lost the car and hit me.

“I haven’t spoken to him so far: I couldn’t hear a thing what he was on about and obviously we will have a different perspective on it.

“It was a tough race until then, from where I started it wasn’t easy to make ground. But I need to take whatever positives I can from this weekend and move on,” he added.

The DNF is a setback for Bottas who never found the sweetspot at Imola this weekend. Well beaten by teammate Lewis Hamilton who finished second. The Finn was lacking almost half a second a day earlier in qualifying in which the Briton took pole, the #77 Mercedes was only good for eighth.