Russell: I asked Bottas if he was trying to kill us both 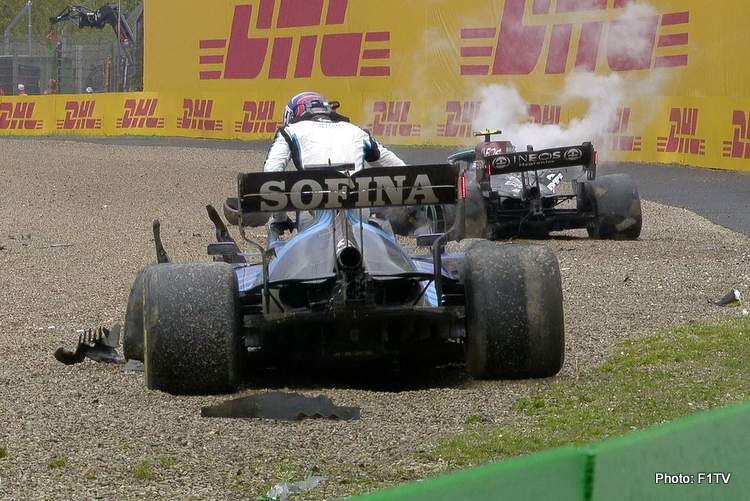 George Russell launched an attack on Valtteri Bottas after the two collided during a chaotic 2021 Emilia Romagna Grand Prix in some of the toughest conditions to race in at the daunting Imola circuit.

Russell was targeting points in the Williams when he came upon Bottas in the Mercedes as the pair barreled at top speed into Tamburello, the white car went to the right to overtake with the black car which remained resolute in the middle of the track.

The Williams clipped the grass with the rear as Russell tried to thread the needle, the car whiplashed into the Mercedes, the pair ending in the gravel, their cars partially disintegrating on impact. The debris was extensive causing the race to be stopped.

Russell jumped out of his wrecked car and rushed to the similarly broken Mercedes with Bottas in the cockpit, whereupon the Briton shouted and slapped the Finn on the helmet.

Afterwards, speaking to Sky F1 reports Russell was raging as he explained the incident: “I was coming up to Valtteri massively fast. I had the slipstream. I had the DRS. And just as I pulled out, he jolted very, very slightly to the right – which is a tactical defence that drivers in the past used to do. It was sort of the Verstappen move of 2015.

“There is a gentleman’s agreement, that is not what you do because it is incredibly dangerous. In completely dry conditions I would have been fine, but it put me onto the wet patch and I lost it.

“An unfortunate incident, but we’re going at 200mph. You need to respect the speed and the conditions. I asked him if he was trying to kill us both. We’re going incredibly fast, we know the conditions…

“In his eyes, he’s not really fighting for anything. A P9 for him is nothing, but for us it’s everything. I’m going for the move, the move would have been absolutely easy and there’s absolutely no reason to jolt like that.

“Like I said, it’s a gentleman’s agreement between the drivers, we’ve always said it’s going to cause a massive collision one day. And here we are.

“We’re both grown men, we’ll have a conversation and talk about it. I’m sure he’s upset and frustrated with me, as I am with him.

“The faintest of movements when you’re travelling at 200mph is actually a massive thing. And it’s not just the speed, it’s the speed difference, I’m probably going 30mph quicker and about to overtake him. Perhaps if I was another driver, he wouldn’t have done that,” added Russell.

Clearly referencing the fact that up until today he was the shoe-in to join Mercedes at some point in the near future, Bottas perhaps the one to make way if Lewis Hamilton decides to extend beyond the ned fo this year.

There is needle between the two, especially in the wake of last year’s Sakhir Grand Prix where Russell made Bottas look ordinary in the same car.

Later, in the Williams team report Russell toned down his tirade: I think it was a very unfortunate incident and one that could have been avoided. Valtteri was defending hard, and he is in his right to do so. The track was going left, and he was going straight. In these conditions with one dry line, it only had one outcome. It is frustrating but that is Formula 1.”

Mercedes boss and Russell’s mentor Toto Wolff said of the incident that involved his two drivers: “It was a bad shunt. There wasn’t a lot of friendly exchanges between the two of them, but we need to look at it again because it takes two to tango.

“Maybe it’s not a 50-50, maybe it’s a 50-40… but I wouldn’t know in which direction. I haven’t seen George yet. I keep teasing him saying if he does a good job he can be in a Mercedes, if not we’ll be in the Renault Clio cup. Today we are more close to the Renault Clio Cup,” said Wolff.

The race is suspended as the clean-up operation begins#ImolaGP 🇮🇹 #F1 pic.twitter.com/JPv4ehGOjr