Ricciardo: Much more taxing mentally in these conditions 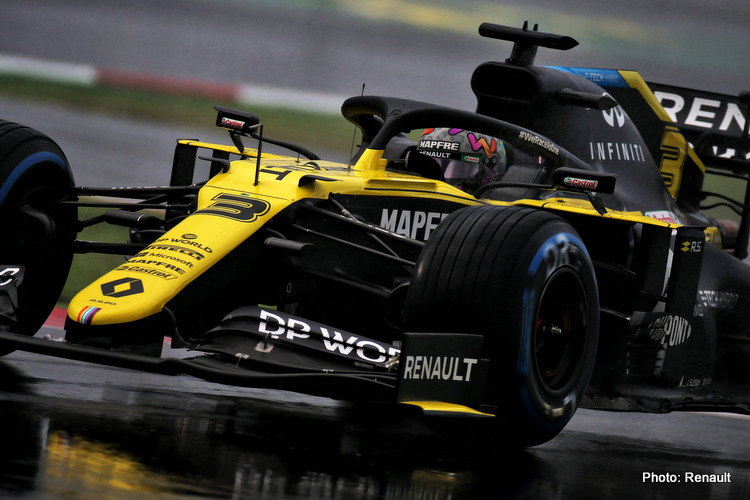 Daniel Ricciardo gave insight into how tough it is to drive the modern era Formula 1 cars, with Pirelli tyres that do not work very well in wet conditions, after qualifying fifth for the 2020 Turkish Grand Prix.

The McLaren-bound Australian revelled on the occasion, spiced with torrid conditions followed by a rapidly drying track, all which played into his hands and he delivered again by ending up the fastest Renault powered driver on the day.

Daniel said afterwards, “I thought yesterday was unique but today was something else! It was by far the slipperiest conditions we’ve ever experienced in Formula 1. It was so unpredictable, and I would compare it to driving on a skid pan.

“There was no sign as to where the grip was in the corners, and I wasn’t getting much feedback from the track either. I didn’t go all guns blazing in Q1, and I kept chipping away at it throughout Q2 and Q3 and to end fifth at the chequered flag is a decent result.

“It’s so much more taxing mentally when conditions are like this. I’m pretty sure I wasn’t blinking during a lap. It’ll be an interesting race tomorrow regardless if it’s wet or dry.”

Indeed, race officials were faced with a damned if you do, damned if you don’t scenario as one side demanded drivers shut up and drive, while the safety camp always beats a loud and notable drum.

“I felt we did well in Q1 and Q2, but not quite so good in Q3. We probably made the wrong decision to run Intermediates at the start instead of Wets as I felt we could have been in the top five.

“It was a good lap for seventh, but it was my only push lap on that set, so maybe with a few more laps, I could have been up there. There will be plenty of opportunities tomorrow. We don’t know about the weather yet, so let’s see.”

Sporting Director, Alan Permane summed up his team’s afternoon in Istanbul, “We’re happy with today’s qualifying session with both drivers inside the top ten.

“It’s never easy in these conditions and I think especially when it’s on the cusp of choosing between full Wet tyres or Intermediate tyres; it’s does make the strategy very tricky.

“We tried Intermediates with Esteban in Q3 and he couldn’t seem to make them work so we reverted him back to the full Wet. We’re pleased with the day and we look forward to a good race tomorrow, whether it’s wet or dry,” added Permane.