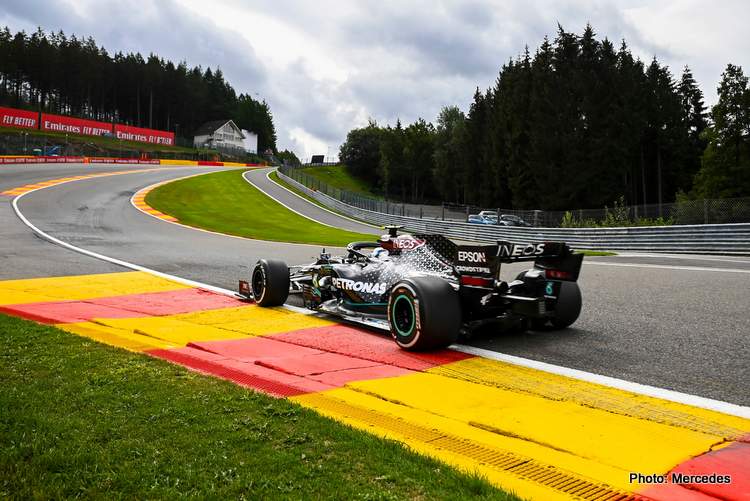 Mercedes topped the time screens at the end of the first free practice for the 2020 Belgian Grand Prix, with Valtteri Bottas nipping top spot from teammate and championship leader Lewis Hamilton, with Ferrari nowhere at this stage.

Birthday boy Bottas, using the soft, powered around Spa-Francorchamps in a best time of 1:44.493 which was only 0.061 of a second up on his teammate in the other Black Arrow. The Finn might have been faster had a puncture late in the session not ruined a hot-lap he was on.

Notably, within one hundredth(!) off of Hamilton’s effort was Max Verstappen in the Red Bull, less than a tenth of a second separating the top three.

The stage is set what will again be a shoot-out between the pair, with Mercedes favourites for a one-two and Max taking them on with whatever Red Bull and Honda can squeeze out of the RB16.

In sharp contrast, it was a dreadful start to the weekend for Ferrari with Charles Leclerc and Sebastian Vettel only good for 14th and 15th respectively, slower than Alfa Romeo driver Kimi Raikkonen in 13th.

But they at least got to drive, neither Haas boys Kevin Magnussen nor Romain Grosjean did any laps due to a Ferrari power unit issue. Antonio Giovinazzi appears to have suffered a similar fate with his Alfa Romeo.

At the sharper end, Racing Point look to have a strong package for the power-friendly venue with Sergio Perez fourth fastest, only a tenth and a bit shy of the benchmark time. Lance Stroll was fifth.

Alex Albon was sixth fastest, half a second down on his Red Bull teammate in third.

The next four positions were owned by the Renault powered posse, with Esteban Ocon seventh and Daniel Ricciardo ninth, intertwined with McLaren duo Carlos Sainz in eighth and Lando Norris tenth.

Also within a second of the top time were the AlphaTauris, Daniil Kvyat half a tenth up on Pierre Gasly, the pair ending the 90-minute session 11the and 12th respectively. 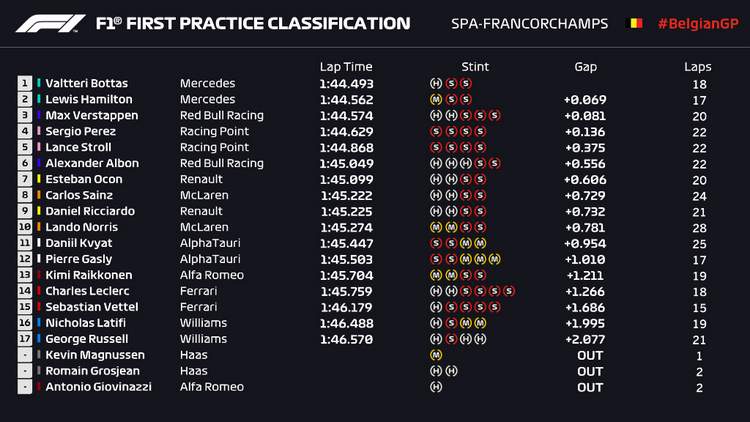 Engine issues in #FP1 mean neither driver was able to set a lap time:

Technical issue with Antonio’s car. Our garage crew is working flat out to fix it. ⚒ #BelgianGP pic.twitter.com/77wqat5j23