Ricciardo: Our long runs looking quite competitive as well 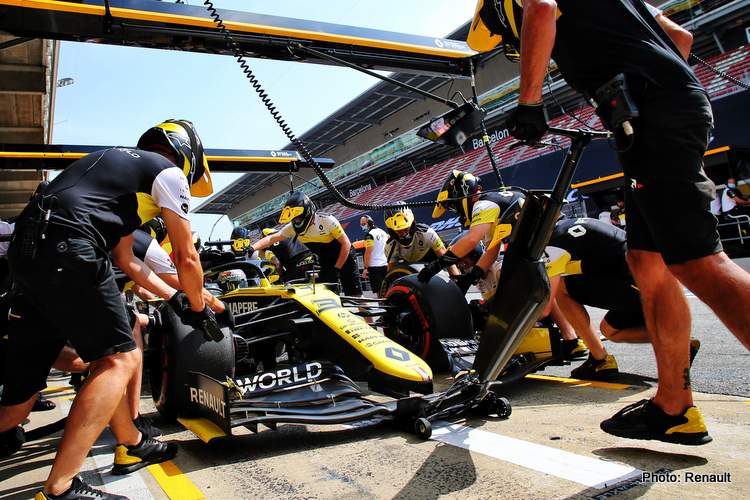 Daniel Ricciardo ended the first practice day of the 2020 Spanish Grand Prix weekend best of the Renault powered brigade, fourth fastest and within a second of the blistering pace set by Mercedes.

After a subdued FP1, Ricciardo was quick out of the blocks for FP2 with 34 solid laps in the afternoon, the best of which was 1:17.868 enough for P4 on the timing screens, with handy pace on the two softer compounds.

The Australian summed up,  “It’s been a pretty good day for us, especially the afternoon’s running. On the timesheets, at least, it’s another decent Friday: third last week, fourth today, so we’ll try and keep that going. Our long run was looking quite competitive as well.

“I wasn’t too happy with the car in the morning, but we made a good step in the afternoon, similar to Silverstone last week. The tricky thing here is the heat. We haven’t driven here in the heat for so long and it’s completely different to what we felt at winter testing.

“We’re trying to understand that, but we got a better grasp on it this afternoon with the tyres in a better place. We have more work to do before tomorrow, but we’ll aim to put in a good one.”

Half a second down on his Renault teammate was Esteban Ocon who struggled to find the sweet spot and reported afterwards, “It’s not been an easy day, but nevertheless, we’ll work hard tonight and find some solutions. Conditions are very warm here and that doesn’t make things easy.

“On our side, we have a bit of work to do at the moment, especially on car behaviour and finding some consistency. It was a little challenging to drive – especially with rear stability – and we’re not on top of the issue from Silverstone yet.

“The good thing is that the car has great pace and we just need to unlock it. Physically, a tough day too in the heat but I’m feeling fine and ready for tomorrow.”

The team’s Chief Race Engineer Ciaron Pilbeam added, “Daniel’s Soft tyre run certainly looked quite competitive. Esteban, meanwhile, has been less happy in the car all day, so we’ve got some digging to do tonight to find the cause of that.

“It seems to be the same issue throughout the day more or less. That aside, it’s been good day’s running and the conditions look to stay the same for the rest of the weekend. We have more to build on from today.”

Ricciardo has a good incentive to finish on the podium thanks to a wager he made with Cyril Aniteboul whereby the team boss will get a tattoo should the big smiling Aussie make it into the top three during his final races as a Renault driver.