Ricciardo: A podium with Renault and Cyril gets a tattoo 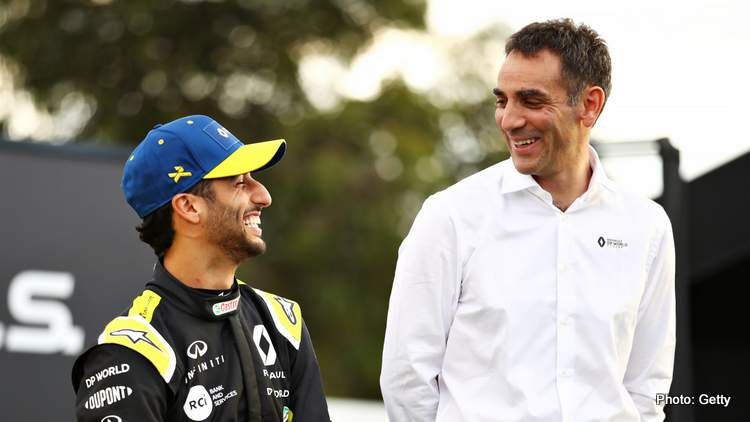 In the remaining races of this season, Daniel Ricciardo is still hoping to leave his mark on Renault Formula 1 team boss Cyril Abiteboul before moving to McLaren.

The 31-year-old made a bet with Abiteboul last year under which the Frenchman agreed to get a tattoo of his driver’s choosing if Ricciardo made it to the podium with the French team.

Renault have not had a top-three finish since they returned as a constructor in 2016.

Abiteboul hinted at the wager when the driver finished fourth at this month’s British Grand Prix and Ricciardo told reporters at the Spanish Grand Prix on Thursday that the boss could choose placement and size but not design.

“This has really broken out now,” he laughed. “That’s the bet… we will clear that up but it is a tattoo, and he does not have any so it’s a big deal for Cyril.

“I feel it´ll be something probably a little spontaneous, spur of the moment, but it’s going to be something funny like when he looks at it he shakes his head. And it’s like ‘Ah, remember those times.’ Yeah, one of those ones.”

Ricciardo is leaving Renault, currently sixth overall, at the end of the season for rivals McLaren — which would make the tattoo even more painful for Abiteboul.

The driver last stood on the podium when he won the Monaco Grand Prix with Red Bull in 2018. He also finished fourth for Renault in Italy last September and said he would be disappointed not to make it this year if the chance came.

“I do want to stand back up there and be delivered a trophy on a robot or whatever they’re doing now,” he said, referring to the COVID-19 protocols that keep the drivers apart on the podium.

“I miss that, and I´ll probably get a fine for drinking out of my shoe but it will be worth it,” added Ricciardo who is also known for his ‘Shoey’ celebrations, drinking the podium champagne from a sweaty boot.