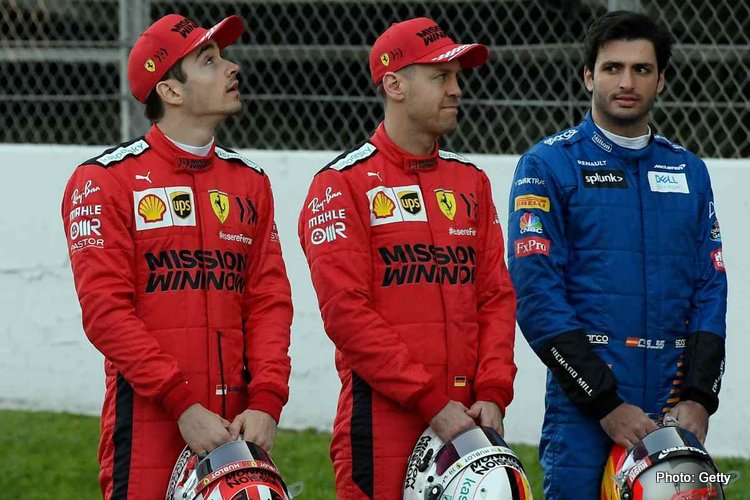 Carlos Sainz will not settle for number-two status and take the fight to Charles Leclerc when he joins Ferrari next year, says the Spaniard’s former F3 boss Trevor Carlin.

The Briton, who has had a string of Formula 1 drivers including Sebastian Vettel and Daniel Ricciardo race for him on their way up, told Reuters on Friday that Sainz might even have the advantage.

“Ferrari, if they thought they were hiring a number two, might have underestimated Carlos,” he said. “I hope they haven’t done that.

“I think given the same kit and treatment and cars, he can run him close,” added Carlin.

“I think Carlos is bloody good. Maybe Charles might edge him in qualifying but when it comes to the race, I think Carlos will be all over him. I think he’s going to be fighting to earn his stripes there, he really is.”

Sainz, 25, was introduced on Thursday as Leclerc’s future team mate, replacing four-times world champion Vettel whose departure at the end of 2020 had been announced two days earlier.

Australian Ricciardo will move from Renault to take Sainz’s place at McLaren.

Leclerc, 22, won two races for Ferrari in his debut season at Maranello last year and outperformed Vettel, 32, on just about every reckoning.

The Monegasque now has a contract to the end of 2024 and is expected to be the one leading Ferrari’s bid for a first title since 2008.

From experience and observation, Carlin suggested Sainz might not see it that way.

PRESSURE ON
The son of a double world rally champion and three-times Dakar winner, Sainz has always set himself high goals and had plenty to live up to.

“I think the pressure actually will be on Charles’ shoulders,” said Carlin. “When Carlos really steps up he could be the surprise show there and make the tifosi (fans) very, very happy.”

Sainz raced for Carlin in the 2012 British Formula 3 and Euro Series, finishing sixth and ninth overall in them respectively.

The Briton said the youngster had not enjoyed ‘the roll of the dice’ back then.

The Spaniard was a Red Bull-backed driver at the time and went on to make his F1 debut with their Toro Rosso junior team before moving to Renault on loan and then McLaren.

“When you go through Toro Rosso and that whole movement around, you don’t necessarily get the chance to develop fully,” said Carlin of a team that has brought on some stellar young talent but also discarded plenty of others.

“To me, the driver we saw 12 months ago at McLaren when he became team mates with Lando (Norris), that’s the Carlos I remembered when he drove for us back in F3. Far more relaxed, far more comfortable in himself and far more confident.

“He’s matured into the real deal. I was very, very happy for him.”

Carlin said the influence of Carlos Sainz senior, ‘El Matador’, had been evident early on in the youngster’s driving style.

“The one thing we noticed when he drove for us was in the wet Carlos was absolutely exceptional when he started out,” he recalled.

“It was just ridiculous what he could do.

“That comes from driving dune buggies and dirt cars around the fields of Spain with his dad as a teacher. I think he would have been a damn good rally driver as well as a Formula 1 driver.”