Racing Point: We expect to be competitive 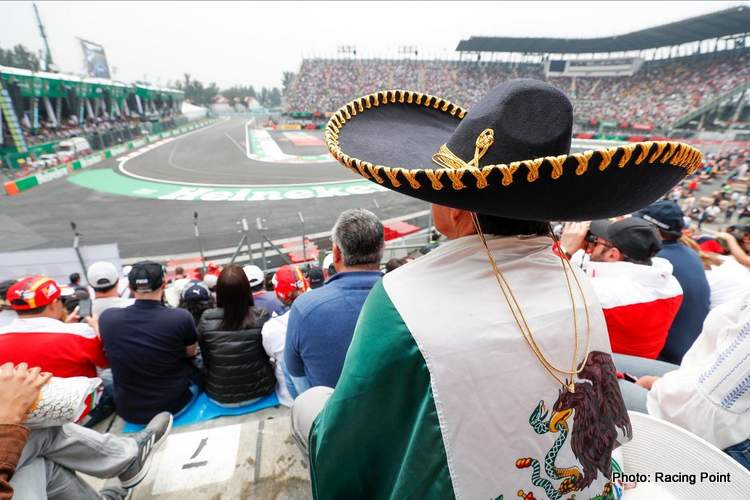 Racing Point preview the Mexican Grand Prix, round 18 of the 2019 FIA Formula One World Championship.

Lance Stroll: “Mexico is a really fun event. The fans are great and they really help make the race special with the atmosphere they create. Even on the Friday, you see full grandstands and can feel the energy of the crowd.

“Away from the track, the city is awesome too. It’s a busy place, with lots going on, and I definitely enjoy exploring and trying the Mexican food – you can’t beat a good taco! I’ve obviously been to Mexico City a few times now for the race, but I also visited Punta Mita a few years ago for a holiday and played on the golf course. It’s a beautiful place.

“Mexico City is up there as one of my favourite circuits of the year. I enjoy driving the car in high altitude conditions and you can really notice the difference because the car feels more nervous. It just adds another challenge for the drivers.

“It’s quite a simple track – sort of like a go-kart track with some long straights linked by some low-speed corners. It’s quite technical in places and there are overtaking opportunities. I think we have good potential in the car for these final few races and Mexico should suit us quite well.”

Sergio Perez: “The race in Mexico is a hugely important weekend for me. It’s my home race and I always feel very proud to see Formula 1 back in Mexico. We’ve just had the notice that the race contract has been extended for another three years, which is great news for the sport and for Mexico. Everybody tells me how much they love the race – my colleagues, the media and the fans. It’s our chance to show everybody the Mexican way of life and how much we love sports.

“The track is a pretty challenging one – especially when you consider we are driving the cars at a high altitude. It’s tough on the drivers physically and it’s hard work for the power unit as well because the air is so thin.

“I think the final sector is my favourite part of the lap – the fast and flowing section, which can be very tricky, and it’s easy to make a mistake through there. Because of the altitude, you have much less downforce on the car and the car can sometimes get quite loose through those fast corners.

“The final sector also has the stadium section and when it’s full of fans the atmosphere is like nothing else. Each time I drive through there, even during practice, I can hear the fans and feel their support.

“Overtaking is never easy, but I think the best opportunity is into Turn 1 – that’s where we’ve seen most of the moves being made.”

Otmar Szafnauer, CEO & Team Principal: “Mexico has been a fantastic addition to the calendar and, over the last five years, has become one of the most popular races of the season. The atmosphere inside the circuit is unlike any other and, away from the track, we’re treated to some great hospitality. I personally don’t think you can beat a good Chimichanga!

“As a team, we enjoy great support in Mexico – especially because it’s a home race for Sergio – and the energy of the crowd is something that the whole team feeds off. We expect to be competitive and to be fighting for points on Sunday. The car has evolved significantly over the last couple of months and Mexico City is another chance to demonstrate the progress we have made recently.”