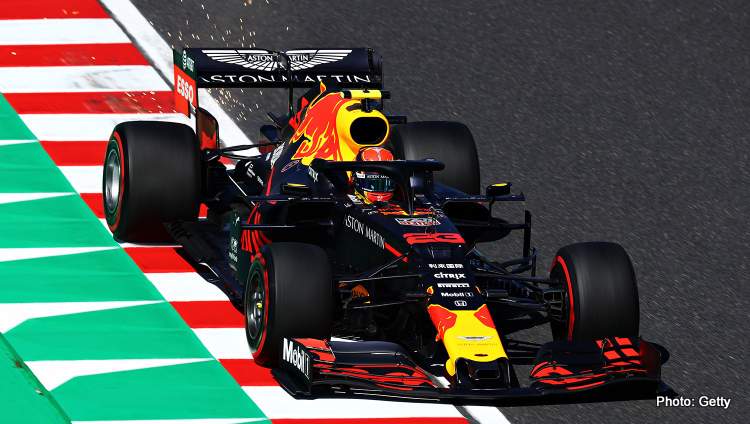 Red Bull report from the Japanese Grand Prix, Round 17 of the 2019 Formula 1 World Championship, at Suzuka Circuit.

“Fourth is my F1 career best finish and this weekend has definitely felt like my best with the Team. Immediately from FP1 I felt comfortable with the car and the balance, which is important for a track like Suzuka where you need a lot of confidence, especially on your first visit!

“I wanted more in the race and felt like I could have done better at the start but I had too much wheel spin off the line and lost a couple of places to the McLarens. I managed to get back past them but by then I had already lost a lot of time to the lead pack.

“The move on Lando for P5 was on, he gave me space and left the door open but it was a bit tight! We then managed to get past Carlos with some good strategy by undercutting him, but from then onwards we were in no man’s land in P4.

“It was just about managing the tyres to the end but with Max’s DNF it was good to score some points for the Team and fourth was the best we could do. I’m still finding my feet but overall I’m happy with my pace and progress and we took a step forward this weekend.

“Coming into the weekend we probably wanted more, especially for Honda, and we were close but we just didn’t quite have the pace. Now we’ll do our homework and hopefully come back stronger in Mexico.“

“I had a really good start and I think I was up to third place which was positive. I stayed on the outside at Turn 2 but Charles drove into the side of my car. I guess Charles was trying to recover places after the start but it’s a long race so there was no need to risk so much so early. We both lost out but he managed to carry on once he replaced his front wing.

I re-joined at the back of the field but my car was severely damaged and we had to retire on Lap 15. From my side I don’t think I could have done anything different, so now it will be investigated by the stewards.

It’s very frustrating as I think we had a good chance of being on the podium again especially after such a good start, which would have been amazing for all the Honda fans supporting us. We are definitely improving and the gap is closing but there is still more work to do before Mexico.”

Christian Horner, Team Principal: “After a great start Max was unfortunately involved in contact at Turn 2 with Leclerc which resulted in him retiring from the race. It looked like Max gave Charles plenty of room but we will let the stewards deal with that.

“Alex had a less than perfect getaway, dropping behind the McLarens but he fought back well, making the two stop strategy work. He passed Norris in a firm but fair move on lap four and closed quickly on Sainz.

“The remainder of the race was quite lonely but Alex drove faultlessly to bring the car home in P4, his best Formula One result to date.

“Leaving Suzuka with a fourth place and a DNF is slightly disappointing at Honda’s home race after such a fantastic turnout from a very enthusiastic crowd. Our congratulations go to Mercedes on winning their sixth Constructors’ Championship here today.”