Hamilton: Focusing on one race at a time 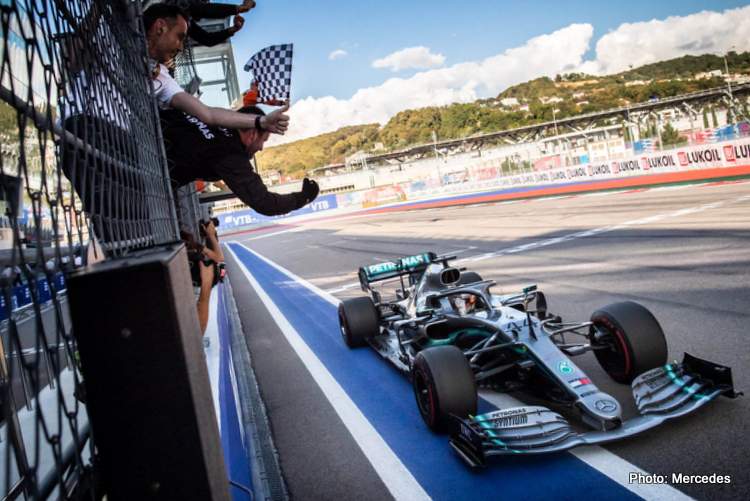 Lewis Hamilton sped closer to a seemingly inexorable sixth Formula 1 World Championship title with a “special” victory in Russia on Sunday, but the Mercedes driver still insisted he was taking it one race at a time.

Hamilton is 73 points clear of second-placed teammate Valtteri Bottas with five rounds remaining and a maximum 130 points still to win thanks to the extra point awarded for the fastest race lap.

“I just don´t try to think about it,” Hamilton said when asked about the championship situation. “It´s not that it´s difficult, it´s pretty easy just to focus on the task in hand… honestly just focusing on trying to be the best I can be each weekend, one race at a time and making sure I´m just delivering at a high-rate.”

While the Briton cannot clinch the title at the next round in Japan, if he scores more points than Bottas at Suzuka he will be in a position to wrap things up in Mexico on Oct. 27 with three races to spare.

Ferrari’s Charles Leclerc, third in the standings, is 107 points behind Hamilton while the Monegasque’s German teammate Sebastian Vettel remains only just in the mathematical running with a deficit of 128.

Even if Bottas wins every remaining race with the fastest lap, Hamilton does not need to finish on the podium again this year, such is his advantage.

Hamilton has won nine of the 16 races to date and Mercedes have won 11 in total, but he said Sunday was a special one.

It was his 82nd career win, nine short of Michael Schumacher’s all-time record 91, and he also took the outright record of 143 races led that he had previously shared with the great German.

Yet, despite Mercedes having won every Russian Grand Prix to date, it was also a surprise with Ferrari chasing a fourth win in a row and enjoying a significant speed advantage on the straights.

“That´s exactly what we needed,” said Hamilton of a one-two victory that calmed jitters in Brackley and Stuttgart over Ferrari’s resurgence. “Those guys are still quite dominant at the moment so it’s taken quite a special job from us today to come out ahead of them.”

Team boss Toto Wolff agreed with the star driver who is on the brink of ensuring Mercedes carry off the title double for an unprecedented sixth year in a row, “That´s what we love in racing. You can win the race even though you haven´t got the quickest package. And that´s what happened.

“It makes it so special. You start to doubt and you know where you have the deficit and then you cling on to these few hopes like a safety car (intervention).

“You´re hanging it out there and then it happens. We’re just overwhelmed in the team. It´s such an important step towards the championship also,” added the Mercedes team principal

Mercedes lead Ferrari by 162 points in the constructors’ standings with 220 remaining to be won.