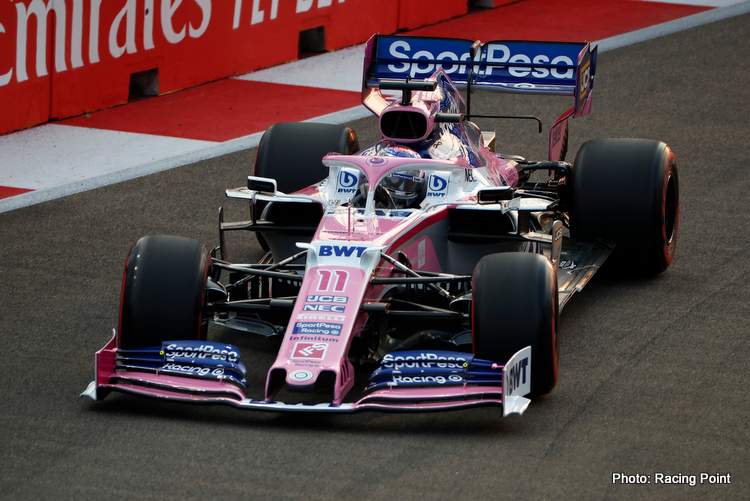 Racing Point report from qualifying for the Singapore Grand Prix, Round 15 of the 2019 Formula 1 World Championship, at Marina Bay Street Circuit.

“Everybody did a tremendous job to put the car together in time for qualifying. It’s very unfortunate that I damaged the car in final practice. This circuit doesn’t allow a single mistake, but I made one. We’ve got a lot of work to do ahead of tomorrow, but I believe that we have an opportunity to recover and fight back. It’s a long race and I’ve been in this position before in Singapore.

“I know that anything can happen here: even when you think you are down and out, you can still come back strong. We have good race pace and there are two hours of racing ahead of us. We have to make sure that we finish the race, stay out of trouble and then we can have a shot at the points.”

“We were in a bad position out on track. I think we had a four-second gap to the car in front and I was being pressured to start the lap from the cars behind. So I had to keep track position or I think it would have been a bigger mess. I don’t think it’s anyone’s fault. We’re all doing the best that we can to try and get free air. In Q1 there are 20 cars on the track and everyone knows how important it is.

“Clean air is very, very important here and I just feel like I had a lack of grip on that second run so I couldn’t deliver the lap time that we needed to get through. And it was very tight too: we were missing a tenth to make Q2 so there’s very little in it. I think we had more potential. There were a few more tenths in the car today. I will now focus on racing well tomorrow.”

Otmar Szafnauer, Team Principal: “It’s been a disappointing qualifying session overall. Lance was caught up in traffic towards the end of Q1 and didn’t get a clear lap. Sergio’s day was compromised by the contact with the wall in final practice, which deprived him of track time and forced the gearbox change.

“He was on the cusp of making the cut for Q3 but will now incur a grid drop for the new gearbox. While I don’t feel we’ve shown our true potential today, I remain optimistic that we can have a better Sunday. The long run pace is encouraging and we will play the long game tomorrow to take any opportunities that come up.”