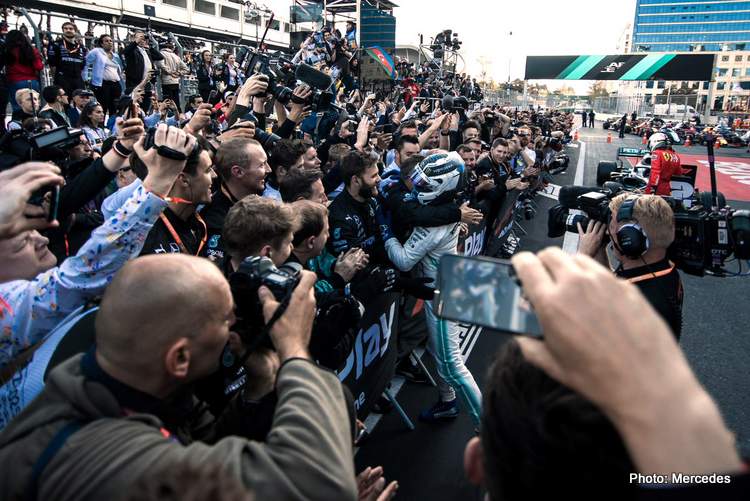 #MsportXtra sums up the Azerbaijan Grand Prix, Round 4 of the 2019 Formula 1 World Championship, at Baku City Circuit where Ferrari flattered only to deceive, the Mercedes stampeded to a record-breaking fourth one-two in a row.

In 2017 the race had four safety-car periods and even a red flag. In 2018 there were also safety-cars and in F2 there were a lot of crashes so the expectations were high for an eventful race where anything could happen.

After the start, nothing much happened in the first few corners so it already set the example for the race. It wasn’t the thrill and excitement we were expecting and most overtaking was done on the start/finish straight due to a tow including DRS.

Gasly had a fun race up until his DNF. Perez stayed out of trouble and has put in a solid race. We only had 1 virtual safety-car because of the Ricciardo/Kvyat incident. Ricciardo tried to out-brake Kvyat but didn’t make the corner which caused Kvyat to go straight as well.

The silly part was that Ricciardo put the car in reverse and bumped into Kvyat. Both cars continued but the damage was done and both retired. Besides Gasly, Ricciardo and Kvyat, Grosjean also retired. Romain seemed to be having a brake problem.

The gaps between cars became such so that DRS wasn’t available anymore for almost the entire field which made overtaking next to impossible. Meanwhile, the top 4 finished the way it started with a 4th consecutive 1-2 for Mercedes with Bottas victorious.

Hamilton P2 and Vettel took the final step on the podium. Perez was top of the midfield and also the last driver outside the top 3 teams that took a podium, it was Baku 2018.

This race saw a podium full of Mercedes and Ferrari and the last time someone outside the top three teams won a race, was Raikkonen in Australia 2013. Since then, only Mercedes, Ferrari and Redbull drivers have taken top spot on the podium. That’s 121 races ago.

What happened to Ferrari?

I don’t think Ferrari have a bad car. I pointed it out earlier that it looked as if they already peaked during testing but haven’t been able to capitalize their package and make progress on it like other teams have done.

It is pretty clear that Leclerc feels happier with the car than Vettel does. Somehow they can’t seem to get the tyres to work the way they would like and therefore they can’t distract the maximum out of the car. Next up it’s the Spanish GP in Barcelona and hopefully they can find some of their performance back, otherwise, it will be another 1-2 for Mercedes.

Can anyone stop Mercedes?

At this point in the season, I would say no.

They have been behind Ferrari all weekend with an average gap of around 0.4s. but suddenly during Q3, they were 0.4s in front so somewhere they magically found 8 tenths of a second. Either they were sandbagging all weekend, or they still have some tricks up their sleeves.

Who knows. That said, if they are also operating on the max, chances are that others might be able to close that gap as the season progresses. I guess Barcelona will tell us more as teams will take bigger upgrades.

Is Max getting impatient?

No, I don’t think so. I’ve watched an interview in where he pointed out that Redbull wasn’t aiming for victories in 2019 but they wanted the partnership with Honda to work and from there on build a solid base with progress being made from one race to another.

Seeing that he’s done much better in these first 4 races than last year, he’s doing great. He makes the most of it and maximizes the potential of the car without doing crazy stuff. He’s collecting solid points at each race and if the rumours are true, bigger upgrades are coming this season that would allow Redbull to fight with Mercedes and Ferrari more often.

They are even carefully thinking about victory. In my opinion, the team is doing well above what was expected by many ever since they took on Honda. Progress is being made every race and that’s what counts.

On a personal note, I would say Gasly really needs to step it up now as it is always better to get useful data from 2 cars to make the team and cars better. At the moment, no matter the reasons, it seems as if Verstappen is pulling the team alone.

What can I say? I’m the first to take back what I said from the start. I thought it would’ve been too soon to put him in the Ferrari and thought another year at Alfa Romeo would’ve been better but he surprised us all.

Again in Baku, he was by far the best driver, the quickest driver. I’m 100% convinced that, if he wouldn’t have made the mistake in Q2, he had a solid change of pole and even the win in the race.

After his crash, he was very hard on himself but that shows that he acknowledged his mistake and will learn from it because, during the whole race, I couldn’t pick him on a single mistake.

Only sad thing is that Ferrari kept him out that long so that he fell back behind Verstappen. Getting the fastest lap was a no-brainer as he was in no-mans-land and would come back in clear air on a fresh set of soft tyres.

His 1:43.009s. wasn’t just the fastest lap, it was also a new track record. If he keeps on doing what he does, he will get his victory sooner rather than later this season, I’m sure of that.

We’re seeing Bottas 2.0 this season. He’s been driving as he did in GP3, with aggression. Not intimidated by the fact that his teammate is a 5-time F1 World Champion. I think he has done some soulsearching this winter.

His contract ends at the end of this season and with other drivers like Ocon and Russell in the waiting room, Bottas has said in public that he wants to settle his future before the Monaco GP. In order to have some leverage, he needs to put his money where his mouth is and perform.

That is just what he’s been doing. With two victories for him and two for Lewis, he is showing what he’s worth. If he keeps up this level, Mercedes can’t really ignore another extension to his contract.

What was trending on social media during the Baku weekend?

Social media was anticipating lots of safetycars and crashes, like in previous years. Of course, on Friday, when Russell’s car was collected, it became a laughingstock.

“A loose manhole cover was bad enough but the crane hitting the bridge was just too much and made Baku look amateur. The hashtag #WellDoneBaku came back to life but for all the wrong reasons.

During the rest of the weekend, it was pretty quiet on social media except the obvious tweets about Mercedes sandbagging and a few rumours about Williams where some thought Claire would be selling the team.

F2, however, had lots of traffic on social media but then again, a lot of things happened in F2.

Raceday of F1 was slow on social media as many people were expecting a lot but not much was happening that was really worth mentioning so apart from a few memes, social media wasn’t buzzing during the #BakuGP weekend.

I’m pretty sure with all the new updates, Barcelona will be a lot busier for those that roam the internet.
#MsportXtra