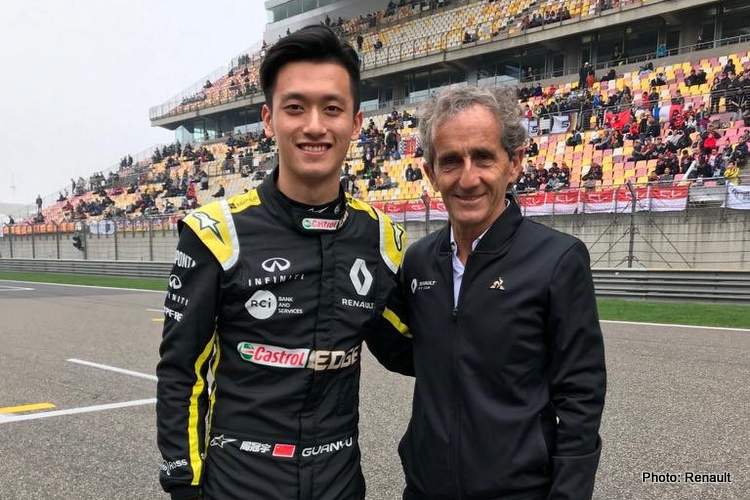 Zhou Guanyu had a whirlwind week at his home Chinese Grand Prix but it was merely a taste of what the Shanghai teenager faces if he achieves the dream of becoming his country’s first Formula 1  driver.

With nearly 1.4 billion people, China is the world’s most populous country but 15 years on from its first Formula One race it is still waiting for a driver to fill one of the 20 slots on the starting grid.

Zhou is seen as the country’s most promising prospect to date, however.

In January he joined the Renault F1 team as a development driver and academy member after winning two races in the hotly-contested European Formula Three championship last year.

This year the former Ferrari driver academy member has graduated to Formula 2, the feeder series that was previously GP2 and has provided a steady flow of drivers to the F1 grid.

“I’m not thinking about being the first one of something,” the 19-year-old told Reuters at the Shanghai International Circuit before the 1000th F1 world championship race.

“I’m trying to be, like, just reaching my own goals I set when I was young. I think also if I reach that I’ll be the first ever Chinese in F1.

“That’s definitely making myself proud, also make the country, the Chinese motorsport history, to have much more people following motorsport, following me and following the racing.”

Zhou is not the first Chinese hopeful to make it to the brink of Formula One, with compatriots Ma Qing Hua and Dutch-born Ho-Pin Tung both testing Formula One cars in the past.

The latter was even Renault’s reserve in 2010, the first Chinese driver to fill such a role, after the company that owned his management agency Genii Capital bought a large stake in the team that raced as Lotus for a period.

But Zhou, whose love of motorsport began when he attended the first Chinese Grand Prix as a five-year-old in 2004, is the first to sign a deal with a manufacturer team and is showing promise.

He finished in the points in both races in this month’s Bahrain season-opener, including fourth in the Sunday sprint race, and is one place ahead of Michael Schumacher’s son Mick in the standings.

A homegrown driver on the grid would only add heft to the sport’s push to expand in a key market, with Formula One keen to add a second race in a country with a rapidly emerging middle class.

“The last few years I didn’t actually get much chance to be here in the grand prix and I was doing more stuff in Europe,” said Zhou, whose week of PR appearances and fan events culminated in a demonstration drive in a 2012 Formula One car in downtown Shanghai and at the track before the race.

“This year, coming back, walking around Shanghai, there’s people knowing me from the city. Also here on the track, I was in the fanzone, the other side, next to the grandstand, everybody wants your autograph.”

China is also an attractive market for carmakers like Renault but team principal Cyril Abiteboul said signing Zhou and Ye Yifei, another rising Chinese star announced as a member of Renault’s young driver academy last week, was not a commercial decision.

Zhou’s immediate challenge is to secure the superlicence points he needs to move up to F1 and he knows that will only come with talent and hard work, “If I can do well and show everybody the potential then if I’m good enough, I’ll be more than happy to be in F1.”

“And then once you have everything in hand at the same time you have to wait for the opportunities. It’s so tight. Every driver is wanting that seat so we will just have to wait and see.”