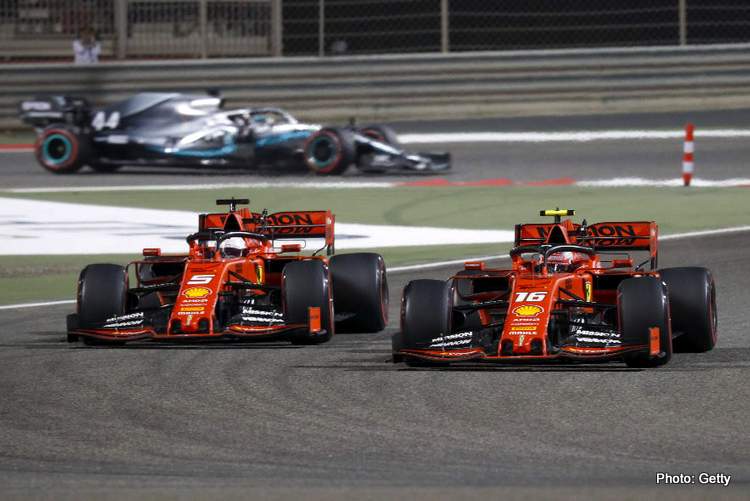 MsportXtra takes a look back on an intriguing Bahrain Grand Prix in which Ferrari yet again lost a race that was theirs to win and, of course, Mercedes were there to pick up the pieces and inflict an even more embarrassing defeat on the Reds than they did at the season opener two weeks earlier.

Q. What was your take on the Bahrain Grand Prix?
MsportXtra: From Friday, all the way through to Sunday, I thought it was an exciting weekend but the grand prix delivered some great racing left and right. We had on track overtaking, some hard battles and drama all through the race. I feel sad for Leclerc but on the other hand, couldn’t believe the luck Mercedes got to walk away with a one-two.

Then there was Renault, with both cars out of the race in the same corner, on the same lap. Unbelievable and it shows they still have a lot of work to do as Sainz had the same issue in Australia. Much was said about the contact between Sainz and Verstappen but no further action was taken as something could have been said from both sides, same as with Kvyat and Giovinazzi where also no further action was taken.

All in all a fun race to watch. The only point I want to make is towards the broadcasters of the world feed who, same as in Australia, missed some battles or showed a replay much too late in my opinion so that you were left wondering about a situation for way too long.

Where did the Mercedes horsepower go?
MsportXtra: I don’t really think they have lost the horsepower. They were down at testing in Barcelona and in Australia, Ferrari didn’t have their act together. In Bahrain, it seemed as if Ferrari found their edge again, although it must be said that Leclerc was on top of Vettel throughout the weekend so expected him to end up in front of Sebastian anyway. As the wind played a big factor throughout the race, and the cars being so aero-dependent these days, that must have played a role in the performances as well, not only with Mercedes.

How did Ferrari lose this race?
MsportXtra: Ferrari started off great but even on Friday, Binotto mentioned that they already turned the engine up to the max. That might have bitten them in the backside later in the weekend.

At the start, Vettel took the lead but after three laps, Leclerc regained it and both Ferrari cars looked good for a one-two finish at that point. What surprised me was that Leclerc was so much quicker than Vettel. Maybe Vettel wanted to play the long-game while Leclerc was still a bit in “F2-mode” and kept pushing to create a large gap.

Then the wind in combination with tyres that went “off the cliff”, made it so that the laptimes went down a bit. Leclerc stayed on top of his game while Vettel seemed to struggle a lot more, even on different tyres and he fell into the claws of the Mercedes of Hamilton. After Hamilton passed Vettel, I think Sebastian was too eager with the go-faster-pedal and spun.

From that point on, it all came down to Leclerc but sadly, maybe from going maximum engine settings all weekend, Charles had a problem with the car whereby it couldn’t recharge the battery anymore which costs 40kph on the straights alone.

Also coming out the corners, he couldn’t deploy the extra power. Hamilton overtook Leclerc and so did Bottas. If it wasn’t for the safety car, Leclerc could’ve even lost out on the podium to Verstappen.

What happened to Honda?
MsportXtra: From what I understand, it wasn’t really a Honda engine but an overall issue that included Honda top speed but also an issue with the balance of the car which made it oversteer, no matter what they changed.

Gasly is having issues since Australia in where he feels he can’t do with the car what he wants and feels more like a passenger than a driver. I hope he finds something fast so that he can get closer to Verstappen. Helmut Marko isn’t known for his patience. But not to blame it all on Gasly, Verstappen also said he struggled a lot with the car and had oversteer all through the weekend.

When asked what the fix might be, Verstappen said he wasn’t an engineer and just tried to get the maximum out of the car he is driving but the unbalance is at the back-end which causes the car to lose downforce at the back and they can’t get the power down on track the way they want.

Maybe something for Adrian Newey to look at. Again, the wind played a negative factor for Red Bull as well as the tailwind out of Turn 6 made the car unstable and that hurt them throughout the more technical second sector where the RB15 should have been stronger.

What is your take on Vettel?
MsportXtra: That’s a tough one. From the outside looking in, it seems as if Vettel lost a bit of hunger. Not sure how to explain that but when he was at Red Bull, he seemed to do absolutely everything to be the best.

The drive to be the best was obvious. Maybe being a family man has changed his state of mind, I don’t know. I mean, he still goes for it but since last year, he is making little mistakes and he still does that. Comparing him to others that are in F1 as long as he is, he’s a bit bleh, for lack of better word.

He lost his mojo somehow. Also after races, since last year, when things aren’t going his way, he’s always like “it is what it is”. Maybe he isn’t feeling happy anymore at Ferrari or something else is going on but again, from the outside looking in, he isn’t the same Vettel as he was at Red Bull or the first 2 years at Ferrari. Maybe things will change and a victory or awesome race might change his state of mind. Time will tell.

What was trending on social media?
MsportXtra: There weren’t many things really trending except RenaultPower, LuckyMercedes, McLaren, Torpedo and Williams, but the one that stood out was Leclerc. He was voted #DriverOfTheDay and rightfully so. He didn’t put a foot wrong all weekend. If he keeps up this momentum, and the car doesn’t fail on him, he can be a real contender for top spots for the rest of the year.

Conclusion…
MsportXtra: After two races, 14 different drivers have scored points and in the constructors’ standings, Williams is the only team without any points.

This week there are two days of testing and I really hope Williams can find something that makes them a little bit more competitive, although the team already confirmed the car has a fundamental flaw in its design.

Furthermore, Both Gasly and Giovinazzi need to pick up the pace as both Verstappen and Raikkonen are carrying the weight of their teams, the latter pair having scored all Red Bull and Alfa Romeo points so far.

Next up it’s the Chinese Grand Prix on 14 April and I’m looking forward to giving my view on that one in “the extra lap”.