Toro Rosso: Not our strongest weekend but lessons learned 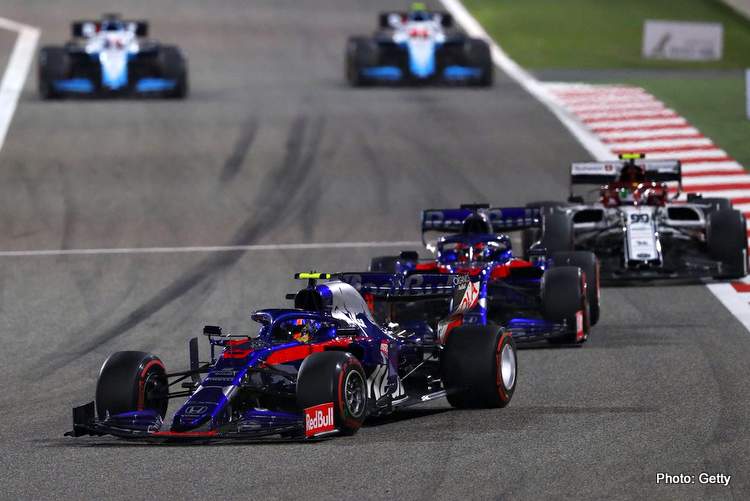 Rookie Alexander Albon scored his first ever Formula 1 points when he finished ninth for Toro Rosso at the 2019 Bahrain Grand Prix, with Daniil Kvyat 12th in the sister car.

Alexander Albon: “That was a busy race – I felt like I was always fighting with someone at some point, there was always something to do! I didn’t have the best start as I was a bit shy into the first corner, but after that, I put my head down and got on with it. We had a good strategy and decent pace on the prime tyre. In the end, we got a bit lucky with the retirements, but I’ll take it!”

“It was so tricky with the wind out there and it made the car unpredictable, but we were quite strong in the race, it’s just a shame about the start. It was a challenge to overtake because when you get close to another car the tyres overheat and you get a bit stuck. However, I enjoyed myself out there and it was good to get that experience. I’m very happy to pick up my first points in Formula 1 and I hope we can carry this pace into China.”

Daniil Kvyat: “This weekend has been a bit scrappy, starting from yesterday where we should have qualified better. At the start of the race, I had too much wheel spin which put me on the back foot on the first lap. From then onwards, you have to fight harder to make up the lost positions and, without these couple of issues, I think it would have been a better race for us.”

“Our pace was quite good today, it’s just a shame we had the spin after the contact with Giovinazzi. This weekend wasn’t the strongest, but we learned some lessons from it so hopefully we can put everything together for a better weekend in China.”

Jody Egginton, Deputy Technical Director: “Tonight’s race has been eventful for us and a number of other teams but everyone has worked hard and we will gladly accept the points. Both drivers did not have a fantastic start so at the end of the first lap we found ourselves towards the rear of the midfield train. From this point on, it was just a case of pushing as much as possible and managing when required, trying to move forwards.”

“Dany’s race was a bit more eventful with the contact with Giovinazzi and then paying a pitlane speeding penalty. This meant that, although his pace was quite strong, it was not possible to recover from these two incidents to get himself back into points contention. Alex worked hard and should be pleased with his race and his first points, especially in what were tricky race conditions. We now switch our thoughts to China, where we expect another close midfield battle both in qualifying and the race.”

Franz Tost. Team Principal: “First of all congratulations to Alex Albon for having scored his first points in his only second race in Formula 1. He showed fantastic performance, especially in managing the tyres towards the end of the race. He did a really good job and he deserved his ninth position. Daniil was involved in a couple of incidents, first with Giovinazzi – where he spun and lost a lot of time – then he was caught speeding in the pitlane, which meant he lost another five seconds.”

“As a consequence, he couldn’t fight for points in the race. In general, during the weekend here in Bahrain, we were consistently hovering between P7 and P10 but, unfortunately, we didn’t get everything together in Qualifying because of a few mistakes. However, in the race we got our speed back, which means we need to remain positive as the package is good. Now we have a quick turnaround to get ready for the 1000th Grand Prix in China.”

Toyoharu Tanabe, Honda F1 Technical Director: “It was a tough race today, although it was positive that we managed to get all four of our cars to the flag, with three of them in the points. On the PU side, it was a trouble-free weekend across both teams and that played a part in our final result in Bahrain.”

“Congratulations to Alex Albon on scoring his first points in only his second Grand Prix. He drove well, producing some good overtaking moves. Daniil Kvyat was unlucky to be involved in a collision, but he showed a good turn of speed and never gave up. We will now see what lessons we can learn from this weekend as we prepare for the next round in China.”