Renault go most aggressive on tyres for Melbourne

Renault have taken the most aggressive tyre approach for the 2019 Formula 1 season-opening Rolex Australian Grand Prix 2019, selecting 10 sets of soft tyres for both of their drivers at the for the season-opening round in Melbourne.

Renault have selected the most attacking approach, running both Daniel Ricciardo and his teammate Nico Hulkenberg with 10 sets of the red-marked C4 tyres across the weekend. The duo will split strategies on the hard and medium rubber, with the Australian receiving an additional set of medium tyres, and one less set of hard tyres compared to Hulkenberg.

Meanwhile, at the sharp end of the grid, both Mercedes and Ferrari will arrive in Melbourne with nine sets of soft tyres. New Ferrari signing Charles Leclerc is the only driver of the four assigned with an extra set of white-banded hard tyres.

Further down the grid, Racing Point F1 Team have elected to take a more conservative approach, picking only eight sets of soft rubber for each of their drivers. Both Sergio Perez and Lance Stroll, in contrast, take on two and three sets of the hard and medium tyres respectively.

Backmarkers Williams will also head to Melbourne with the same approach. George Russell takes on the most sets of medium tyres amongst anyone in the field – running the weekend with four sets at his disposal. His teammate Robert Kubica instead takes on an extra set of the hard compound. 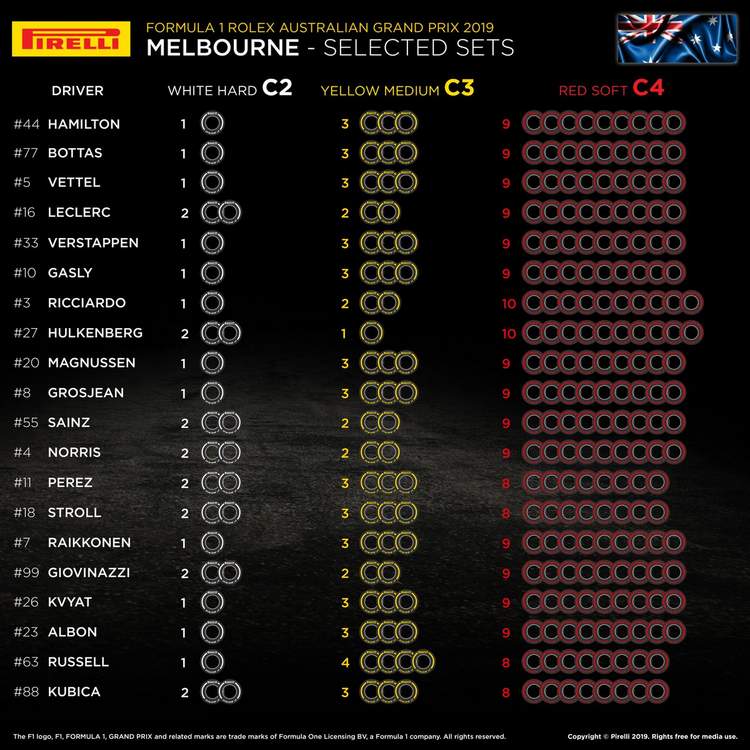