Have Ferrari ditched Mercedes and sided with Liberty? 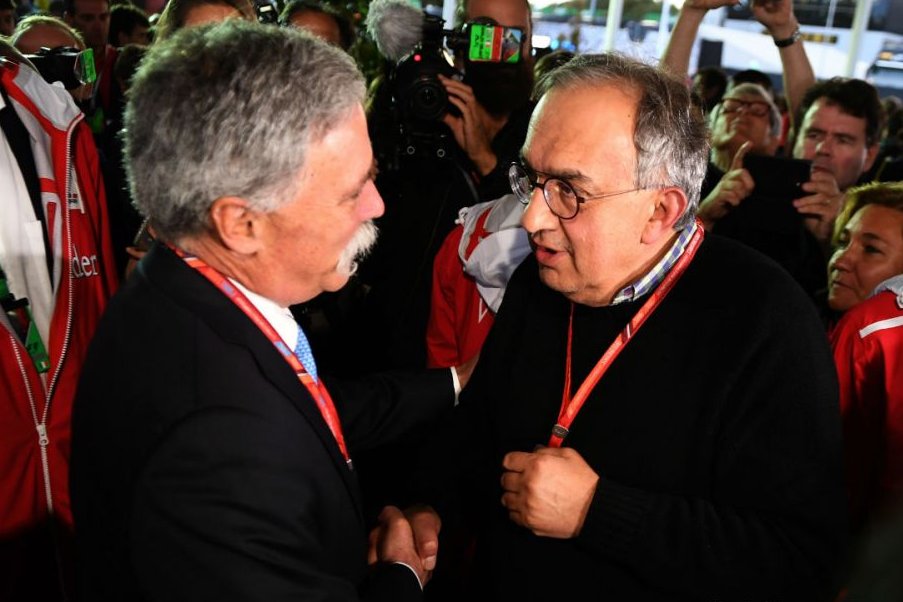 Liberty Media’s vision of a future Formula 1 includes a “not negotiable” budget cap for teams, Ferrari who along with Mercedes opposed such a restriction is now said to be on board as they pave the way for their own exclusive deal with the sport’s owners for 2021 and beyond.

In the aftermath of a meeting before the Austrian Grand Prix between F1 chief Chase Carey, FIA President Jean Todt and Ferrari’s Sergio Marchionne, it appears that the Maranello boss and his team were convinced by what was presented to them at the said encounter.

Earlier this year Mercedes and Ferrari bosses were in accord with regards to the future vision for F1, and theirs did not include a budget cap. This, in turn, created two blocs, the two big teams on one side with Liberty and their supporters on the other.

The latest development would mean that Mercedes now stand alone on this one.

Auto Motor und Sport report that Marchionne’s about-turn came in the wake of Niki Lauda’s criticism of the Reds during the ‘oil in fuel’ saga, which the Mercedes chief ramped up during the Monaco Grand Prix weekend. This did not go down well in Italy and clearly the big boss does not forget.

The Big-2 alliance – if there really ever was one – between the sport’s most potent teams now appears to be a thing of the past.

Ferrari’s about-turn comes as a surprise because Liberty Media had initially promoted the idea of a $150-million budget cap but, these days, appears to have taken up the cause of the smaller teams who will accept costs capped at $170-million in 2021 reduced by a further $10-million a year later.

In both instances the exact areas in which expenditure will be limited are unknown, however, it is expected that the cap will not include driver salaries, the wages of the highest paid (non-driver) employee and marketing related costs.

Where compromise was reached between Ferrari and Liberty Media is uncertain, but it would be safe to assume that the $170-million budget cap is acceptable for the Reds, but instead of starting it in 2021 it appears they have negotiated for the cap to be introduced only in 2023.

Until then it is suggested that team budgets should be reduced in three stages, however, the detail and timeline for such an endeavour is not known at this point.

Furthermore, talk in the paddock is that Ferrari are playing ball with Liberty in an effort to retain the substantial financial ‘heritage bonus’ the team earns for merely turning up at races, as they have been receiving for decades under Bernie Ecclestone’s divide-and-conquer rule.

The thinking is that Marchionne is personally angling to have these traditional payments retained in whatever guise Liberty can justify making them and Mercedes were merely a pawn in this their ultimate objective.

This is an unexpected and intriguing development in the direction Formula 1 is heading with Liberty at the helm, although nothing is official – and may never be – it is certain that Mercedes bosses will have taken notice of the defection by Ferrari and how they respond now should be telling. Watch this space!

Big Question: Is the Ferrari-Mercedes alliance in F1 over?