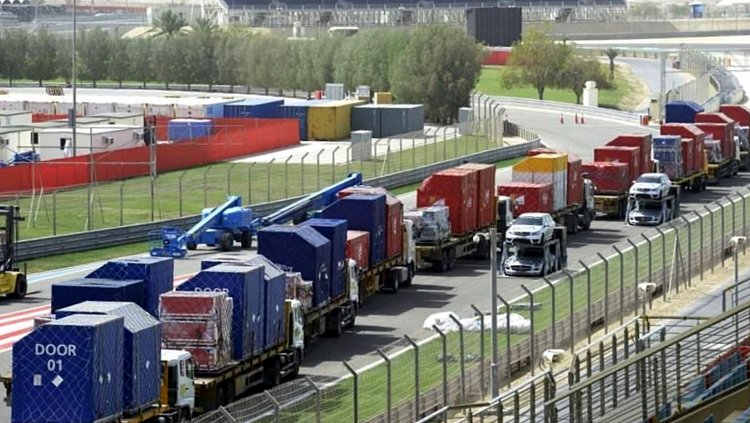 The superstar drivers and high profile senior management figures are the storefront window of Formula 1, behind them there is an ‘invisible’ army of staff dealing with logistics to collectively to deliver a grand prix weekend, but the sports’ first-ever triple-header was almost a ‘bridge too far’ for the unsung heroes toiling thanklessly behind-the-scenes.

Between the week of 22 June until last Sunday team trucks each travelled over 2,700 km in an unprecedented and challenging 17-day of three back-to-back grand prix race weekends – journeying from their respective headquarters to Paul Ricard in southern France, before a trip to Red Bull Ring in the Spielberg hills followed by a cross-channel journey to Silverstone in the heart of England.

It was the first ever triple-header for Formula 1 and for many hopefully the last time such a schedule will be forced on the circus which travels the European highways with an estimated 1,000 trucks and transporters – driven in double and triple manned shifts – hauling the show from venue-to-venue on the continent.

Adding to the logistics challenge is the fact that teams have to move around 120 to 150 team staff members from venue-to-venue while arranging accommodation and all the requirements to keep a working team of people happy for three weekends in a row.

Renault Race Support Team Manager, Gilles Carraro explained the challenges of the undertaking in an interview with CNN, “I would say it’s very difficult on two levels, both physically and mentally. It’s very complicated, for the guys especially, because it’s difficult to give them time off.”

“It’s not simple to say exactly how many hours per day but generally I would say we’ll be on track from 8am to 8pm. Not less than 12 hours per day. So yes, the effort required is a lot,” added Carraro.

Team chiefs are no fans of the marathon triple, Red Bull chief Christian Horner explained, “Moving cars, parts and people in such short succession is a drain on resources because obviously an awful lot of components are going backwards and forwards to the UK.”

Toro Rosso team principal Franz Tost described those ‘unseen’ elements which make the journey’s a frustrating slog, such as holiday transit on European roadways at his time of the year, “That means a lot of traffic out there. We have had a lot of problems on the borders because of the checks which they make over there.”

“I think this is at the absolute limit. I hope this will not be the case any more in the future because people are really working day and night in this three weeks,” insisted Tost.

Carraro added, “The team that can handle this triple-header the best can have an advantage. It could be a big limitation for a team that needs some upgrade, new parts or to try to improve car performance. That’s tough enough with back-to-back races.”

“Generally, whatever you started with, you’ll finish these three races with, because it’s difficult to bring upgrades,” revealed the Renault manager.

DHL trackside manager Martin Pople, who has a couple of decades experience hauling F1 equipment, said, “We’re against the clock the whole way through. It just means more people being thrown at it, a lot more hours worked and most of the guys won’t be getting a break for about three weeks really.”

Force India Chief Operating Officer Otmar Szafnauer said of the stress on his people, “I can see it in the mechanics and the service personnel there. They’re pretty much exhausted. I didn’t anticipate that it would be this bad. People told me beforehand that it was going to be very difficult, but I just thought ‘yeah, sure’. But it really is.”

McLaren chief Zak Brown commented, “I think it’s been difficult, the three races back-to-back. I think most of the team if not all of the team – I’ll let them speak for themselves – would probably not prefer three races.”

Drivers relished racing in the triple-header, but they are highly pampered relative to those who do the graft to get them on the grid, which Ferrari driver Sebastian Vettel was quick to point out, “For us drivers, three races in a row are the least stressful. We just have to adapt our training. The worst hit are the mechanics.”