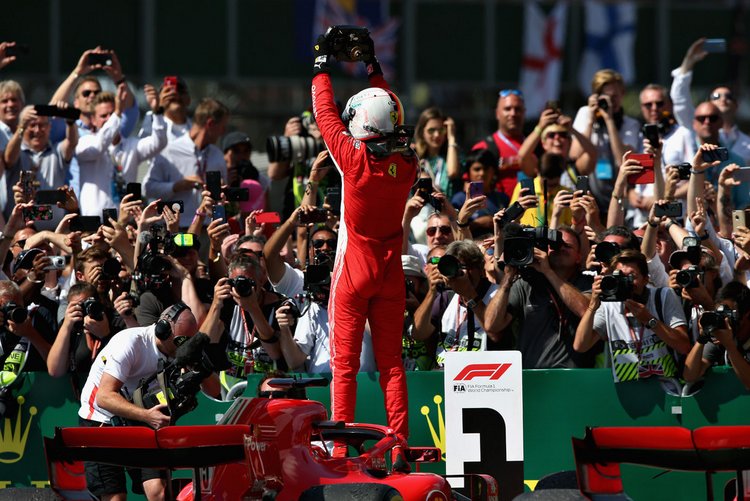 Sebastian Vettel broke the collective hearts of Britsh fans when he spoiled the party at the British Grand Prix, taking a well-deserved victory while Lewis Hamilton recovered from an early spin and proceeded to storm through the field from the back to claim second place in an incident-packed race at Silverstone.

It was a race of two halves which began with a poor start by pole-sitter Lewis Hamilton, which turned into a shambolic first lap which not only tripped him up but also accounted for others.

The ‘race’ really began after the second of two safety car periods that concertina-ed the field and led to an enthralling four-way shootout between the two Ferrari drivers and the Mercedes duo in the final ten laps of the race.

Bottas led when Bernd Maylander peeled the safety car into the pits with, with Vettel on fresh tyres tucked in behind the leading Mercedes as he waited until DRS was available to pounce and take the lead with a fine move to claim the lead and maximum points.

This threw Bottas, who had driven impeccably all afternoon, thereafter he tripped up and slipped back further as Hamilton got past to claim second place and Raikkonen muscling past his fellow Finn to snatch third place.

Ferrari were quick and shrewd to bring Vettel and Raikkonen in when the first safety car appeared, swapping the Pirelli mediums for fresh softs. Mercedes kept both their cars out.

When unleashed, after the safety car, the difference in rubber told. Vettel was unstoppable once DRS was enabled and then swooped on the brakes at the end of the Wellington Straight to take the lead from Bottas and bag maximum points not long after.

Vettel said afterwards, “Obviously the Safety Car spiced it up. I think I surprised Valtteri and I wasn’t sure I’d make the corner but I did and it worked really well. I’m very, very happy.”

“Big thanks to the team for supporting me and also people in the background because yesterday I was a bit damaged. Today it was no problem.”

“With all the adrenaline going it was fine. Probably I will feel it tonight but it doesn’t matter, the tape held up. I enjoyed the race a lot and I think the people enjoyed a lot.”

“A great day,” concluded Vettel who now leads the championship by eight points after ten rounds and adds a second British Grand Prix winner’s trophy to the one he won in 2009 with Red Bull.

From pole, Hamilton was tardy off the line and slipped down to fourth but was tagged by the front of Raikkonen’s Ferrari, which spun him around and turned his afternoon to one of damage control which he managed admirably to finish second.

However his scything through the field highlight the enormous deficit between the Mercedes, indeed the same with Ferrari drivers, as powered past Merc customers and the Renaults with consummate ease. Formula 1 has two distinct divisions with a widening gap between the haves and the nots.

Hamilton questioned strategy used by the Reds, “Interesting tactics I would say from this side [looking at Ferrari drivers] but we’ll do what we can to fight them and improve in next races. This is the greatest race of the year and this is the greatest crowd.”

“I’m sorry I wasn’t able to bring it home for you today but thanks for the support. It’s you guys that helped me get through today We’ll take it on the chin, keep pushing hard, but believe me I will not give up.”

Bottas did not put a foot wrong all day until he allowed Hamilton through late in the race, thereafter his tyres simply had no answer to Raikkonen’s Ferrari on fresh softs.

Raikkonen summed up, “I tried. Obviously, my view is I did the best I could but there seems to be an awfully opposite look at what I’m doing, unfortunately.”

Of the lap one incident with Hamilton the veteran said, “My bad, but that’s how it goes sometimes. It was my mistake, so that’s fine. I deserve it, I took the 10 seconds and got fighting.”

Max Verstappen looked good for a podium at one point, but in the wake of three impressive race weekends (winning in Austria last Sunday) he spun out of contention late in the race when the Red Bull suffered brake failure in Turn 16 on lap 48.

Teammate Daniel Ricciardo, who was edged by his younger teammate all weekend was rewarded with fifth place.

Nico Hulkenberg benefitted from the Haas pair tripping up at the start, kept it clean to claim sixth place and Best of the Rest in a car that clearly was no match for the big three.

In seventh place, Esteban Ocon had a strong race on the doorstep of the Force India factory at Silverstone, his teammate Sergio Perez was 11th.

McLaren’s Fernando Alonso turned 17th on the grid to eighth in the race after another gutsy race peppered with choice radio chatter. Teammate Stoffel Vandoorne was 12th.

Magnussen recovered from his first lap incident to take ninth on a day in which Haas rightfully expected much more from their drivers.

Romain Grosjean virtually signed his F1 departure papers with another woeful weekend, involved in the first lap scuffle with his teammate he then tangled with Carlos Sainz late in the race when heading for sure points.

Williams were slowest of all, finishing their home race with Lance Stroll in 13th and Sergey Sirtokin 14th. A miserable day for the once mighty British team.

At the start, Vettel got away superbly to take the lead ahead of pole position man Hamilton. The Briton’s team-mate Bottas also swept past and Hamilton found himself third as the field went through Abbey.

The situation was then made worse for Hamilton as Raikkonen braked too late and collided with the right rear of the Mercedes. Hamilton spun off track and dropped to 17th place. Raikkonen later received a 10-second time penalty for causing the collision.

At the front, Vettel was free to pull away and by lap eight the German had built a 5.7s lead over Bottas, with Verstappen a further four seconds behind. Raikkonen was now fourth ahead of Ricciardo and the Renault of Hulkenberg.

However, Hamilton was powering through the pack, and on lap eight he had climbed back to eighth place behind Leclerc. He was, however, now 25.7s behind Vettel. He made light work of passing the Monegasque and then breezed past Hulkenberg on lap 10 to sit 13.0 behind fifth-placed Ricciardo.

Raikkonen pitted on lap 13 to serve his penalty and after the hold he took on medium tyres to emerge in 10th place.

Verstappen was the next to pit, on lap 17, with the Dutchman also taking medium tyres. The Red Bull driver emerged in fifth place.

Behind him, Raikkonen was now on a march and in short order he dismissed Sainz, Ocon, Leclerc and Hulkenberg to sit in sixth place ahead of the next pit stop, on lap 18, for Ricciardo.

Leclerc was the next to visit pit lane but immediately after his pit stop he reported a problem and he was told to stop his Sauber. He pulled off track at Turn 3 where his strong run of recent points finishes ended.

Vettel then pitted on lap 20, taking on medium tyres. He rejoined in the lead and after Bottas made his stop the German led ahead of the Finn and Hamilton. Hamilton was now 5.8s behind the championship leader but he required a pit stop.

That stop arrived on lap 25, with the Mercedes driver taking on mediums. He rejoined the action on sixth place, 11s behind Raikkonen and 28.2s behind race leader Vettel.

The German was now 3.5s clear of Bottas, with Verstappen almost 10 seconds further back and with Ricciardo fourth ahead Raikkonen.

Bottas then began to close up to Vettel and on lap 30 the gap was down to 2.8s. Hamilton too was picking up the pace and by lap 30 he was running quickest and closing in on Raikkonen.

Red Bull then pitted Ricciardo for a second time on lap 30, with the Australian taking on a fresh set of soft tyres. He rejoined in sixth place, behind Hamilton, who was now just 4.9s behind Raikkonen.

The complexion of the race changed completely on lap 32. Marcus Ericsson overcooked his entry to Turn 1 and he lost the front end of his car. He spun and careered off track and into the barriers.

The safety car was immediately deployed and during the caution, Vettel, Verstappen and Raikkonen all pitted for fresh soft tyres as the field bunched up.

Bottas now led the race behind the SC, with Vettel second ahead of Hamilton, Verstappen, Raikkonen and Ricciardo.

On the restart Bottas held his advantage ahead of Vettel and Hamilton, bit behind them Raikkonen attacked Verstappen. He passed the Dutchman but the Red Bull driver returned the favour in the next corner and he held onto fourth place.

The Safety Car was almost immediately deployed again as behind the leaders Sainz tried to pass Grosjean in to Copse. It was tight, with Sainz leaving little room, and the result was that the Frenchman clipped the back of the Renault and they both went off track and out of the race.

The Safety Car left the track at the end of lap 41 and Bottas again held the lead ahead of Vettel and Hamilton, with Verstappen fourth ahead of Raikkonen and Ricciardo.

Vettel than began to exert pressure on Bottas and after a long tussle the German managed to sneak past the Finn with a good move under braking into Brooklands.

Behind them Verstappen spun and then retired from the race.

Bottas, whose tyres were fading, was then passed by Hamilton and he quickly slipped into the clutches of Raikkonen who brushed past his compatriot to take P3.

And that was the way it stayed with Vettel crossing the line ahead of Hamilton to take his 51st career win, putting him tied third with Alain Prost on the list of most wins in F1.

Hamilton’s superb recovery from the back of the field was matched to some degree by Räikkönen’s march to the podium from 10th after serving his penalty.

Bottas was fourth ahead of Ricciardo with Hulkenberg sixth for Renault. Ocon took seventh ahead of  Alonso, Magnussen and Gasly. 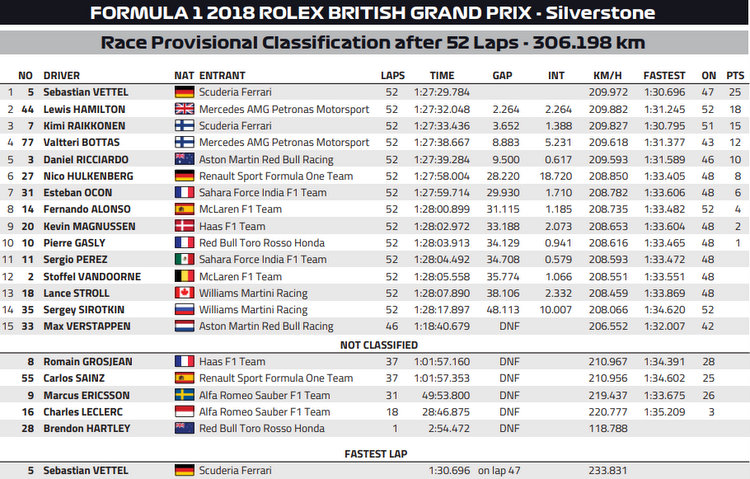 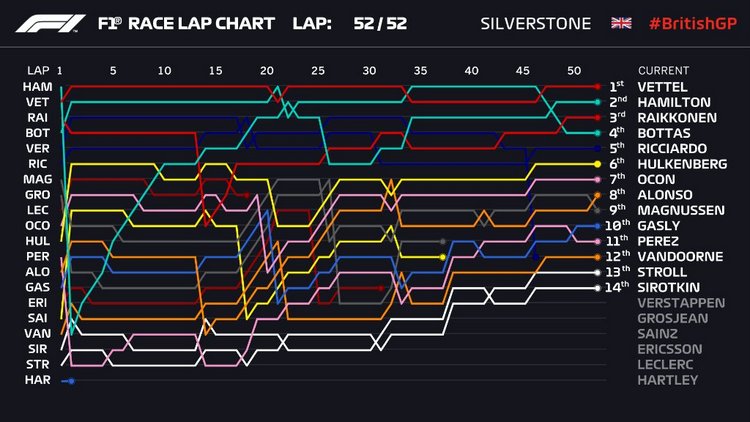