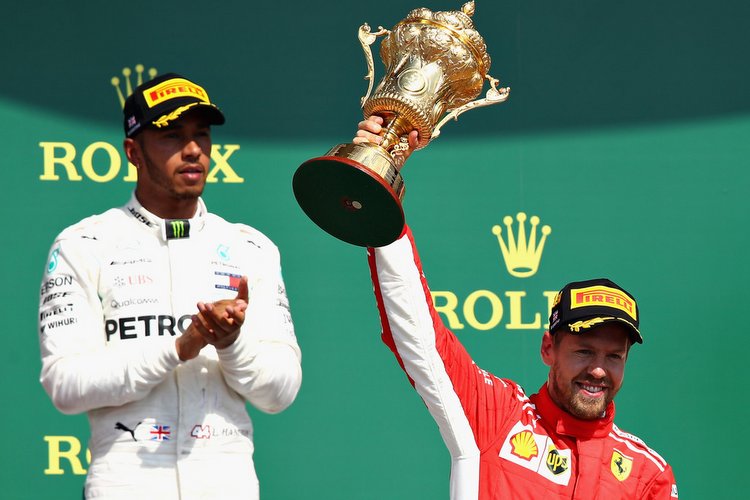 Mercedes are up in arms with regards to what they are calling questionable tactics used by archrivals Ferrari during the British Grand Prix which Sebastian Vettel won amid several incidents including a collision between teammate Kimi Raikkonen and Mercedes’ Lewis Hamilton on the opening lap.

Hamilton was sluggish off top spot on the grid, dropping down a few places before being tagged by the front wing of Raikkonen’s Ferrari. This spun the Mercedes and it was catch-up for Hamilton thereafter.

The Finnish veteran was given a 10-seconds penalty for his shenanigans, which he accepted and admitted without fuss culpability for the incident.

Hamilton went on to benefit from a couple safety car periods as he limited the damage by finishing second at his home race, the meat in the Ferrari sandwich on the results sheet, but it was victory he sought in front of his adoring home fans after a massive qualifying effort the previous day.

However the Mercedes driver was fuming, refusing to be interviewed by Martin Brundle until he was on the podium and there gave hint of his wrath, “Interesting tactics I would say from this side [looking at Ferrari drivers] but we’ll do what we can to fight them and improve in next races.”

And in the post-race press conference at Silverstone, he added, “All I would say is that it’s two races in which a Ferrari has taken out a Mercedes. Valtteri and I have both lost out in those situations.”

Team chief Toto Wolff told reporters, “It was unfortunate, it was a racing incident with Raikkonen. Le Castellet was the first time we got taken out and this is the second – it’s a lot of constructor points. To put it in James Allison’s words: This is either deliberate or incompetence. It leaves us with a judgement.”

“I am not happy. We had a difficult weekend, qualifying on pole and then getting take out on lap one, it puts you on the back foot,” lamented Wolff.

Hamilton leaves Silverstone trailing Vettel by eight points in the championship standings, with Ferrari 20 points ahead of Mercedes in the constructors’ race.

Big Question: Do you think it is deliberate or incompetence?