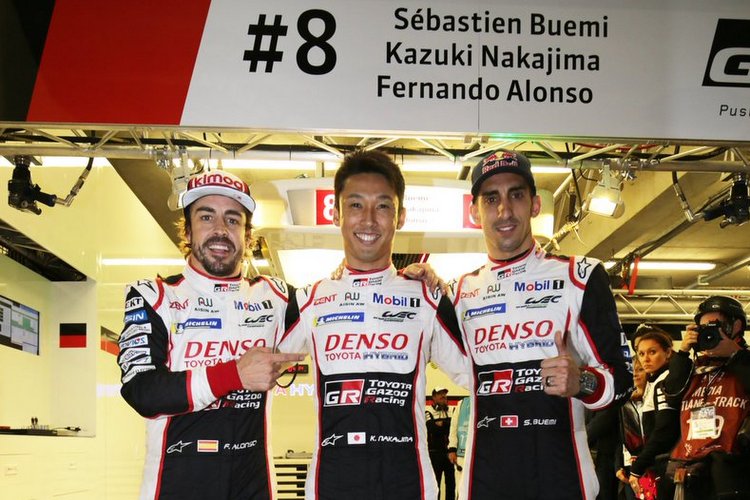 In a heavily interrupted final qualifying session for this weekend’s 86th edition of the 24 Hours of Le Mans, Kazuki Nakajima claimed pole position for the No.8 Toyota Gazoo Racing entry he will share with Fernando Alonso and Sébastien Buemi with a time of 3:15.377.

The Japanese driver was one of a few to make an improvement since yesterday, and he finished the second a full two seconds ahead of the sister TS050 Hybrid to make it a Toyota 1-2 on the starting grid for the second round of the WEC Super Season.

Kazuki Nakajima said afterwards, “I was more or less at the maximum on that lap, I had no traffic so I cannot complain too much. It was much better than yesterday when I didn’t feel as good grip as today. The lap time was not as good as I expected but I have to be happy with it. More importantly, I had a really good balance for the race trim and we are ready for the race.”

On the night, the third session was extended by 30 minutes to balance a red-flag-shortened early evening qualifying and, although it started in the dry, rain began to fall over the track towards the chequered flag.

Rebellion Racing claimed third place with the No.1 Rebellion R13-Gibson of Bruno Senna (3:19.449). Just four-hundredths of a second behind the second Swiss car was the No.17 SMP Racing BR Engineering BR1-AER. Thomas Laurent in the No.3 Rebellion actually set a faster time but was one of several drivers to have his times deleted for pit infringements.

Colombian Juan Pablo Montoya, already a Monaco Grand Prix winner and Indianapolis 500 champion, will start 24th in the United Autosports entry that is competing in the lower LMP2 category.

In the LMGTE Pro battle it will be Porsche on pole position after Gimmi Bruni’s 3:47.504 lap, set Wednesday, wasn’t bettered on Thursday.

The No.91 Porsche GT Team 911 RSR thus secured the top spot in the world championship class, nearly 1.6 seconds ahead of the sister No.92 Porsche with Michael Christensen posting the fastest lap.

The No.66 Ford GT will start in third place with a lap of 3:49.181, three tenths ahead of the reigning world champions Ferrari.

The LMGTE Am battle once again saw Porsche see off the challenge to take the top three places in the class.

Matteo Cairoli was confirmed as the fastest driver to secure the class pole with a 3:50.728 lap in the No.88 Dempsey-Proton Porsche, six tenths ahead of Ben Barker in the No.86 Gulf Racing 911, with the No.77 Dempsey-Proton Racing Porsche in third.

The No.54 Spirit of Race Ferrari of Giancarlo Fisichella was fourth fastest, 1.2 seconds behind the pole position car.

Toyota are clear favourites for outright victory as the only major manufacturer entered in the top LMP1 category after champions Porsche quit but can take nothing for granted after losing out in 2017 due to unreliability.

This year’s race will be their 20th attempt to become only the second Japanese marque after Mazda to triumph in the endurance classic. The big question is, assuming they run untroubled throughout, which of the two factory crews will end up as winners.

For Alonso, the aim is to tick off the second part of the ‘Triple Crown of Motorsport’, leaving only the Indianapolis 500 to conquer. He has also won the Monaco Grand Prix twice.

Only one man has completed the Triple Crown — the late British world champion Graham Hill.

In closing it must be reported that Thursday was a trying day of qualifying, the first of two sessions was red flagged twice with big crashes that required track repairs. As a result there were numerous incidents from race-ending wrecks to high-speed excursions into sandtraps for some or the barriers for the unfortunate.

Among the more serious incidents was that of Giorgio Sernagiotto who crashed heavily in the #47 Cetilar Villorba Corse Dallara P217 Gibson. This brought out a lengthy red flag period.

On social media later, Sernagiotto wrote: “I’m fine. The rupture of the right suspension made the car take off at 320km/h. Now let’s hope we can fix the car.”

Most drivers struggled with the changing conditions and as a result yellow was a busy flag waving around the numerous marshall posts dotted around the 13.626 km circuit.

Friday is a rest day in which drivers and teams parade through the city centre of Le Mans, traditionally one of the one of the highlights of the weekend.

Great lap by @kazuki_info to put the car on the pole position. Great job by everyone in @Toyota_Hybrid . Long race ahead and I’m looking so much forward to experience it. #toyota #lemans24 #wec pic.twitter.com/7WTYUIifjG 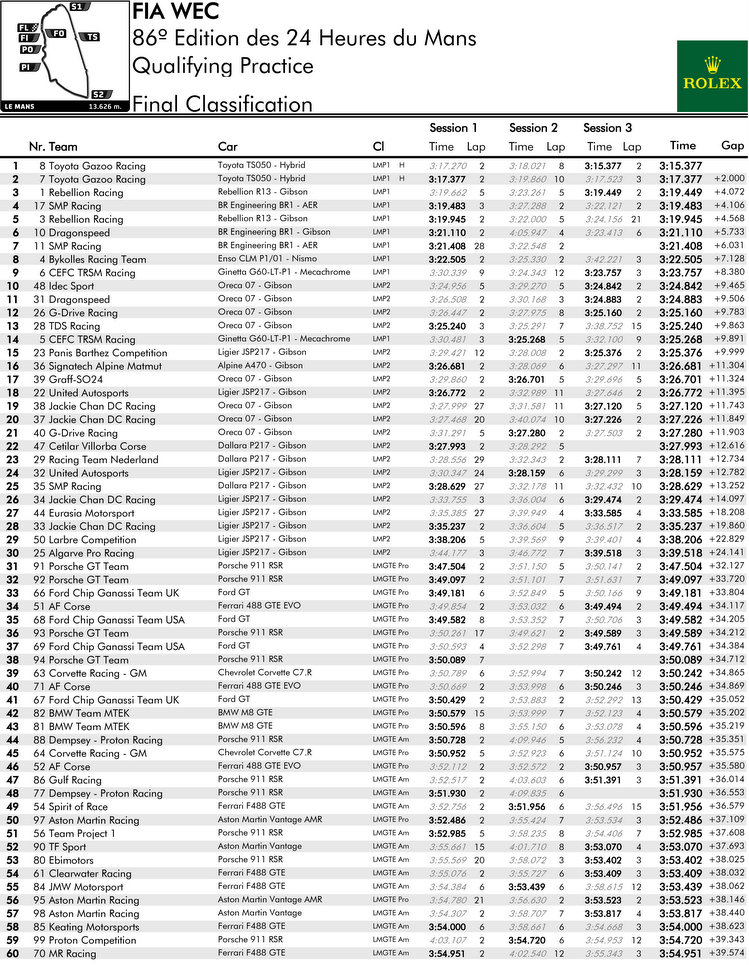