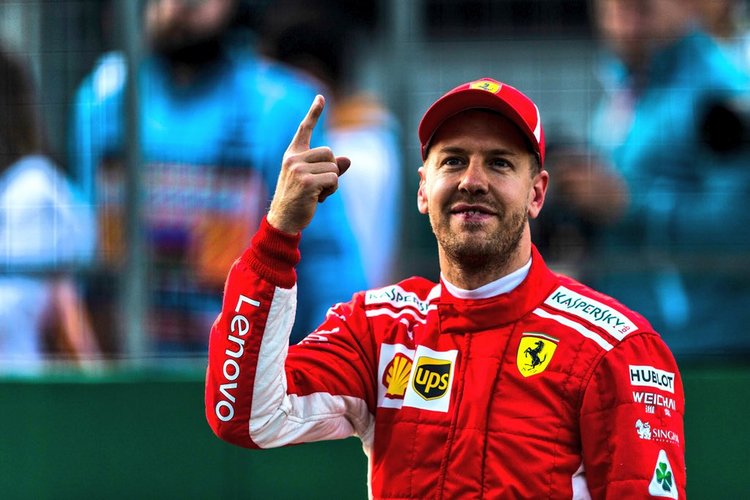 Sebastian Vettel powered to pole position for the Azerbaijan Grand Prix, topping the timing screens ahead of the Mercedes duo of Lewis Hamilton and Valtteri Bottas.

Vettel’s first run in Q3 was a mega lap of 1:41.498 was enough to claim the top spot start for the race by a couple of tenths from Lewis Hamilton in the Mercedes who find a little extra on his final run to oust teammate Valtteri Bottas from second place on the timing screens.

Hence arch-rivals Vettel and Hamilton will start from the front row of the grid, setting the stage for a rematch at the venue of their infamous ‘road-rage’ clash last year.

The German, nine points ahead of Mercedes’s reigning champion, will be hoping to convert his third pole in a row into a third victory in four races on Sunday.

After a subdued first day in which, by his own admission, was struggling to find the sweet-spot around the tricky Baku City Circuit, Vettel showed handy pace in FP3 and then tapped into it again to claim pole position.

He said after scoring his third pole in as many races, “I felt the car was good Q1 and Q2 so I knew in the final session I knew I have the car to do what I want. The first lap I was really happy. Fortunately, that was enough.”

“It will be an intense race. Anything can happen here and Safety Cars are likely. The good point is that our car was really good this afternoon so it should be in a good place tomorrow.”

“Yesterday I struggled a bit with confidence and trust in the car and rythm but today, when it clicks, it just keeps coming,” added the German.

Reigning world champion Hamilton gave it his best shot and went quicker on his second attempt than he had done in his first Q3 attempt, but it was shy of the top time, but enough to beat his teammate Bottas.

Hamilton said, “That was close. We did the best job we could. It was very very close. I lost a bit in the last sector and Sebastian did a great job.

“They were quickest all weekend and they obviously have a phenomenal car this year. But I’m really happy with what the team did to get us from where we were yesterday to today. We are in the mix. I will try to give Sebastian a hard time tomorrow.”

Bottas was a little over a tenth down on his teammate and will start fourth, he said, “For sure [we can take the fight to Ferrari tomorrow]. We are there with both cars now. We are starting very close and the race here can be crazy.”

Next up, albeit four tenths adrift of the top ten were the Red Bull due with Daniel Ricciardo fourth fastest, under a tenth up on Max Verstappen in fifth.

Kimi Raikkonen was sixth, but credit to the veteran Finn for his last lap effort, where he was faster than anyone in the first two sectors, but stomped on the gas too early exiting Turn 16 which cost him a second and probably pole position.

Best of the rest were the Force India pair of Esteban Ocon and Sergio Perez, who tangled in Baku last year in a clash that cost the team a likely podium, will line up together on the fourth row.

Nico Hulkenberg qualified ninth for Renault but the tall German will collect a five-place drop for an unscheduled gearbox change, lifting his Spanish teammate Carlos Sainz to that position instead.

Despite qualifying 11th Lance Stroll, third in Baku last year, will start from 10th in his Williams.

It was another frustrating day for McLaren as they were by far slowest of the Renault powered brigade, with Stoffel Vandoorne failing to make it out of Q1. Fernando Alonso was four tenths faster and ended the session in 13th.

They will only have been spared extreme blushes because they outqualified both the Honda-powered Toro Rosso’s who nearly took each other out in a high speed scene out of the Keystone Cops.

Hartley gave his side of the story, “I slowed down, unaware he was so close. I owe him a big apology and almost caused a big accident. It’s my fault.”

Pierre Gasly added, “It was pretty scary, I don’t know what happened but he slowed massively. I was going 320kph maybe – I tried to avoid him but was sure I was going to crash. I don’t really know how I avoided it.”

In Q1, Ricciardo set the early pace with a lap of 1:43.259 that put him three tenths of a second ahead of team-mate Max Verstappen. But the Red Bulls’ hold on the top two spots was brief as Räikkönen and Vettel stole the places, with the Finn topping the order with a lap of 1:42.985. He eventually improved that to a time of 1:42.538 as Hamilton worked his way to a time of 1:42.693 to sit in second place.

That wouldn’t last, however, as Verstappen went for another attempt and stole into second place ahead of the Briton with a lap of 1:42.642. Vettel was third ahead of Ricciardo and Force India’s Esteban Ocon and Mercedes’ Valtteri Bottas.

In the drop zone as the clock counted down to three minutes left, were Sergio Perez, whose opening flyer has been wrecked when he locked up at Turn 15 and was forced to take an escape road, Williams’ Lance Stroll, Sauber’s Marcus Ericsson, Toro Rosso’s Brendon Hartley and Haas’ Romain Grosjean who had driven off track at Turn 3 early in the session with a gearbox problem.

Perez quickly hauled himself out of danger, rising to 10th before dropping back to 12th place at the end of the session. That dropped McLaren’s Stoffel Vandoorne into the danger area, and as the final runs played out the Belgian was unable to drag himself out of the mire and was eliminated in P16.

There was drama in the final moments as Toro Rosso’s Pierre Gasly was forced to take evasive action when he came across team-mate Brendon Hartley going slowly. The Frenchman was justifiably furious when his team-mate moved across on track, but he was told that Hartley had a puncture and had no choice but to drive slowly and the New Zealander apologised over team radio for his lapse.

Both Toro drivers were eliminated, with Gasly in P17 ahead of Sauber’s Marcus Ericsson and with Hartley behind the Swede. Haas’ Romain Grosjean also exited the session, driving off track early in the session with a gearbox issue.

In Q2, Mercedes, Ferrari and Red Bull opted to start the session on supersofts, looking to set their quickest lap on the compound and start on the red-banded Pirelli tyres. Räikkönen though struggled on the tyres, locking up twice and ruining flying laps as he tried to find a comfort zone. In P15 in the final minutes, he was forced to switch to the ultrasoft and his final run vaulted him to top spot ahead of Hamilton.

There were nervous moments for Ricciardo as he abandoned a final run on ultrasofts. His supersoft lap left him 10th and he snuck through to Q3 just a tenth ahead of William’s Lances Stroll who was eliminated ahead of team-mate Sergey Sirotkin, McLaren’s Fernando Alonso, Sauber’s Charles Leclerc and Haas’ Kevin Magnussen.

Vettel led the way in the first runs of Q3 with a time of 1:41.498 that put him 0.342s ahead of Hamilton, with Bottas third ahead of Verstappen and Ricciardo, who reported that he’d brushed the wall in Turn 15 on his first flyer.

In the final runs, as Vettel failed to improve and Hamilton made an improvement, but not enough to threaten the German’s opening time, it was Räikkönen who threatened to make the biggest move and spoil his team-mate’s party.

The Finn was two tenths up on Vettel after the first two sectors of his final flying lap but a huge slide in Turn 16 wrecked his lap and he remained sixth.

Vettel, therefore, took his 53rd career pole ahead of Hamilton and Bottas. Ricciardo made a good step on this final run to claim fourth place ahead of Verstappen and Räikkönen. 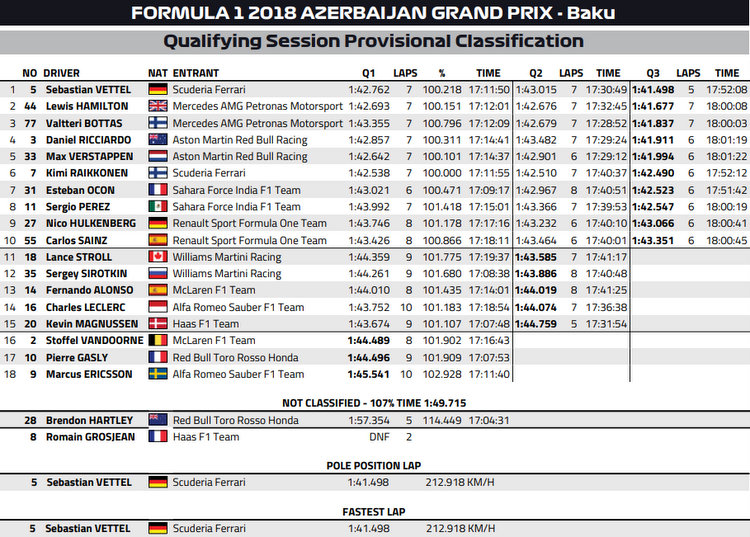