Hakkinen: I told Ayrton I had bigger balls than him 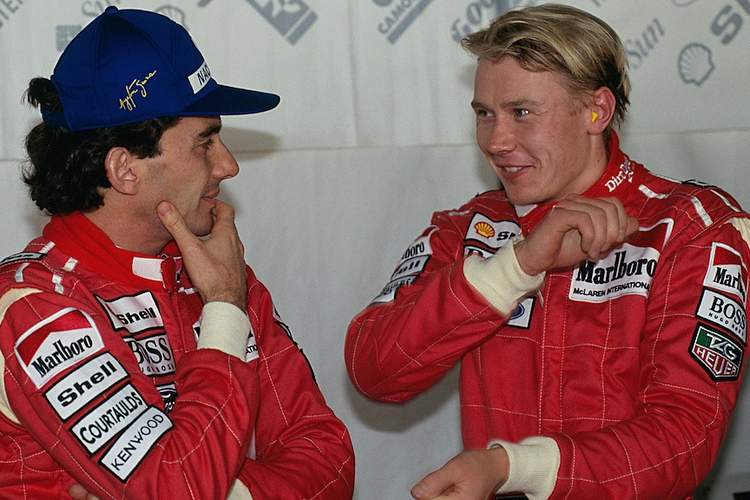 Mika Hakkinen looked back on his first race as Ayrton Senna’s teammate back in 1993 and recalled how he told the Formula 1 legend that he had bigger balls than him which in turn infuriated the Brazilian and as result, the pair were never close after that.

In 1993, after a hugely successful partnership with Honda, McLaren were running Ford customer engines and Senna had waited until the eve of the season-opening South African Grand Prix before signing for the team.

It was a race-by-race deal apparently worth a million dollars per grand prix to the Brazilian whose teammate was Michael Andretti. But the American did not deliver and after the Italian Grand Prix, 13 races into his F1 campaign, he departed and made way in the team for Hakkinen.

At the next race, during the first qualifying session for the Portuguese Grand Prix, Senna was third quickest behind the pace-setting Williams duo of Alain Prost and Damon Hill.

Notably, McLaren’s promoted reserve, Hakkinen, was only a couple of thousandths shy of his illustrious teammate. Senna a master qualifier was expected to turn up the wick and put the youngster in his place in the second qualifying, but the Finn went one better and out-qualified the Brazilian that weekend.

Hakkinen recalled, “When I started at McLaren Ayrton did not respect me at all. Sure we did have conversations but you could tell he didn’t appreciate me one bit.”

“In Estoril, at the Portuguese Grand Prix, when I drove faster than him he came to ask me how on earth I was faster than him. I showed him [with my hands] and said: I have bigger balls!”

“That made him totally mad. He got really angry and went on to tell me about his whole career, about the world championships he had won. He put me against the wall and said: Don’t even try…”

“After that our relationship would never be good again. Ayrton had noticed that I am a threat to him and that he would lose his status as the best driver in the world and there is this young guy coming who’s going to overtake him,” added Hakkinen who went on to win back-to-back world titles with McLaren in 1998 and 1999.