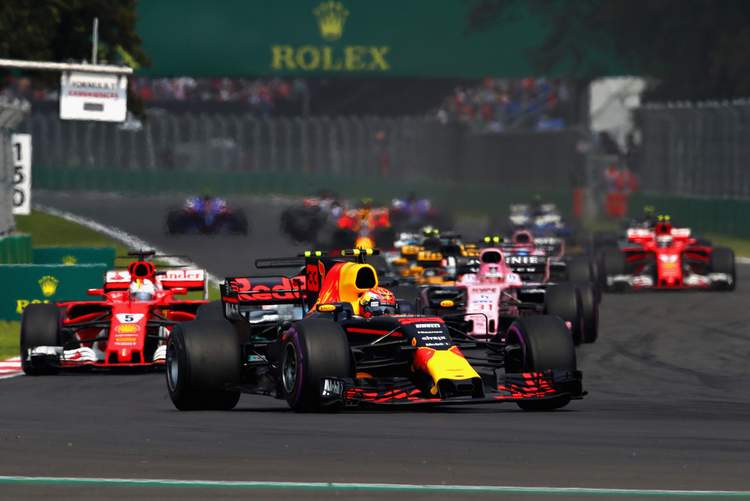 Red Bull driver Max Verstappen dominated the Mexican Grand Prix , but the day belonged to Lewis Hamilton who only finished ninth but did enough to make it mathematically impossible for Sebastian Vettel to beat him with two rounds remaining in the 2017 Formula 1 World Championship.

Drama started early in the race as the field powered down the ‘drag strip’ main straight with Vettel, Verstappen and Hamilton side-by-side.

The Ferrari hit the apex first but, the Red Bull stuck with him as the pair rubbed tyres through the right-left-right complex, at which point Hamilton saw a gap which he dived into and snatched second place as Verstappen got the better of his fierce duel with Vettel.

It was a classic case of three into one does not go, nor does two into one!

As the young Dutchman scurried out of Turn 3, behind him Hamilton got over-steer exiting the turn and got on the kerbs, behind him Vettel tagged the back of the Mercedes. The Ferrari wing breaking up and Hamilton suffering a puncture in the process.

The two title protagonists were forced to pit, and thereafter Vettel did everything he could to try make his way to second place. But it was a huge ask and, in retrospect, he was never going to make in normal race conditions. He  finished fourth.

Hamilton struggled after his pit stops, he simply had no pace on the yellow band softs. A Virtual Safety Car (VSC) period late in the race allowed him to pit for ultrasofts. He found pace and had to work hard to finish ninth – his fourth title sealed, perhaps not in the way he would have wanted.

In parc ferme the world champions’ Mercedes showed scars of the first lap battle, with a damaged diffuser which certainly did not help his cause on the day.

In the huge atmospheric arena, packed to capacity, Hamilton said, “I did everything that I could. I had a good start. I don’t really know what happened at Turn 3, I gave him plenty of room.”

“I tried as hard as I could to come back. A big thank you to my family and my team. Mercedes have been incredible for the past five years and I’m so proud to be a part of it.”

“It doesn’t feel real. That’s not the kind of race that you want but I never gave up. I kept going right to the end,” added the newly crowned 2017 Formula 1 World Champion.

At the front Verstappen was simply supreme, delivering a faultless drive to claim his second victory of this campaign, in a season in which he was dogged by bad luck.

He controlled proceedings while every other Renault powered car in the race  parked with engine problems. But his, for a change, held itself together and by the time the chequered flag waved he was nearly 20 seconds ahead of his closest rival.

Verstappen said afterwards, “The start was very crucial. I went around the outside and that worked out well. After that I was just managing the tyres and the car performed brilliantly in the race.”

“Big thanks to Red Bull, without them it was not possible. After last week this is the perfect race, it was great. It was cruising. It was good to see [Lewis and Seb touching] and after that I just pulled away,” added the Red Bull driver.

Team chief Christian Horner revealed, “We couldn’t slow him down! From the start onwards he dominated the grand prix. He controlled the temperatures really well.”

Mercedes’ Valterri Bottas was second, capitalising on the first lap incident and slotting into second where he remained until the end of the race. Unable to do anything to attack Verstappen ahead, but at the same time pulling out over 30 seconds on Kimi Raikkonen who finished a lonely third in his Ferrari.

Esteban Ocon continued his impressive run in the Force India, running third at one point but the VSC played against him and he had to settle for fourth place.

Also impressing was the youngest driver in the race – who turned 19 on the day – Lance Stroll in the Williams staying out of trouble and again delivering in a race of high attrition by finishing sixth.

Local hero Sergio Perez was seventh, ahead of Kevin Magnussen in the Haas in eighth ahead of Hamilton.

Fernando Alonso claimed the final point for McLaren, providing great entertainment as he dueled with Hamilton in the late stages of the race.

When the lights went out at the start, Vettel was pressured by Verstappen off the line and at the end of the long run to Turn 1 the Red Bull driver drew alongside the Ferrari driver and muscled his way past in Turn 2 to take the lead.

There was minor contact between them as they went through with Vettel losing part of his front wing, but more damage was to come for the German as Hamilton went around the outside to steal second.

The left side of Vettel’s front wing collided with the rear right of Hamilton’s car. The result was a puncture for the Mercedes man and substantial front wing damage for Vettel. Both limped to the pits for repairs and rejoined at the back of the field.

At the front, Verstappen began to build a lead and by lap 14 he found himself 5.5 seconds clear of  Bottas who had inherited second after the Vettel/Hamilton incident.  Ocon was third, the Force India driver having bypassed Räikkönen in the opening lap.

Sainz was the first to make a scheduled stop, the Renault driver pitting on lap three to take on soft tyres with which he’d try to reach the flag.

Ricciardo was the next into the pit lane but for the Aussie it was a complete stop. After taking a grid drop in the morning for an engine change, he rose from his P16 starting position to P7 by lap five. But his race was then ended by a suspected turbo failure.

At the back Vettel was marching through the order and by lap 25 he was up to 11th place behind Alonso. Hamilton, though, was struggling, and after being lapped by race leader Verstappen the Briton complained that he couldn’t get near Sainz up ahead in P18.

Hulkenberg was the next to exit the race, the German being told to stop the car, as it was unsafe. With a suspected ERS issue, Hulkenberg was told to exit down the nosecone and jump off.

Behind him Räikkönen profited most, the Finn leapfrogging Ocon to claim third place. Behind them William’s Lance Stroll was now firth ahead of Perez and Magnussen.

Magnussen’s hold on the place would be shortlived. Vettel had taken on ultrasoft tyres during his pit stop and he soon began setting fastest laps. He quickly reeled in the Dane and passed him with ease to claim seventh place.

There were however, 16 seconds to make up to the next target, Perez. Vettel closed quickly, to 7.5s by lap 45 but with the German needing second place to keep his championship hopes alive if Hamilton finished outside the points, and with almost 54 seconds to make up to second-placed Bottas it looked like the German’s title challenge was done.

Hamilton, though, was making his own steady progress and on lap 46 he passed Ericsson for 12th place and began to close the 7.1-second gap to Vandoorne.

On lap 50, Vettel lunged down the inside into Turn 4 to pass Perez and looked to close the 3.3s gap to Stroll and a few laps later he eased dismissed the Canadian to take fifth place. Hamilton, meanwhile, had passed Vandoorne under DRS into Turn One to claim P11 and his team were advising him that at the pace he was going he was forecast to finish in P8.

Hamilton began to make that forecast come true by powering past Massa on lap 57 to claim 10th place and a points finish. Up ahead Vettel passed Ocon to grab fourth but with 24 seconds to make up to get to third placed Räikkönen and a further 26 second gap to close to Bottas the German was fighting a losing battle. Told of the gaps he sighed “oh, mamma mia.”

Sainz, meanwhile, retired from the race, meaning that four of the six Renault-powered cars in the race had exited by lap 62. Just leader Verstappen and 13th-placed Gasly remained.

At the front the Dutch driver was in complete command, however, and not experience any mechanical concerns. With an 18s gap to Bottas it might have been expected that he would throttle back and control matters but Verstappen wanted more and on lap 64 he set a race record for the circuit with a lap of 1:18.892 and then widened the gap to over 20 seconds by the chequered flag.

Behind him Bottas held second ahead of Räikkönen, while Vettel’s brave charge ended in fourth place. Ocon scored his second fifth-placed finish of the year, while Stroll delivered a good result for Williams with sixth place.

Pérez was seventh in front his home crowd ahead of Magnussen, while Hamilton finished ninth, enough to earn the Briton his fourth drivers’ title. The final point on offer went to Alonso. 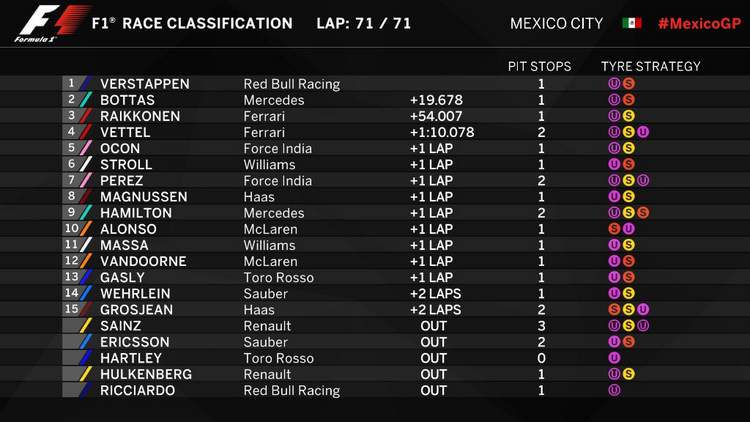