The reason why Hamilton is the best qualifier in F1 history 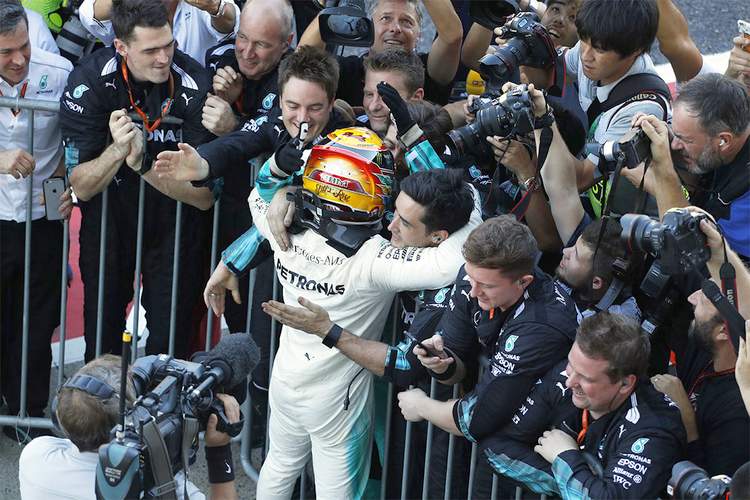 Lewis Hamilton holds the Formula 1 record for pole positions, the Mercedes driver has annexed the top spot start on a record 71 occasions in his 204 starts thus it is no surprise that he treats the Saturday session at each grand prix with added determination and a special mindset.

In an interview with Sky Sport, Hamilton revealed why he relishes those afternoons where he puts everything on the line, “It’s shorter, it’s intense. It’s enthused with so much energy. The pressure is at the utmost. You go out, and you have that one lap to perfect and deliver. I love that challenge.”

“It is the ultimate performance, putting all the pieces of the performance together and I have always loved that. That’s when you attack. It’s when you really go into battle. The car is light, it is the fastest you get to drive at any point in any weekend and it all comes down to that one moment and the decisions you make and I love it.”

Below are the 2017 qualifying statistics after 14 rounds so far this season, showing the four drivers who have started from pole this year:

Much has been said about how Hamilton took the winter break to recharge and returned a changed man, he himself admits that he targeted qualifying as a work-to-do aspect of his game, “It is definitely an area I really wanted to improve this year.

“It has always been something I have enjoyed and generally excelled at. [But] it is all about the small percentages, and getting those extra little bits out of your own performances has really been my goal this year and I have managed to do that.”

“You’ve seen how I live my life over the years and I really think the balance I allow myself to make is what enables me to perform the way I do. I arrive at the weekends in a positive frame of mind. I don’t have any baggage. I generally don’t give a you-know-what about what anyone says.”

“I know my values, who I am and what I am about. I know what I am here to do, so I do it. I guess it is about building a force field against all the negativity that generally tries to penetrate. Nothing generally gets in and I know how to race and drive. It is about doing it.”

As for his appraoch to qualifying, Hamilton admits, “I have never visualised a lap. I tried it many years ago. For me personally, it is a complete waste of time. It did nothing for me. You can’t predict what you are about to do. You can’t put in your mind that you are going to turn at this point.

“It is the greatest thing about racing these cars, it’s that it’s all on the dime, it’s all on the split second – how you react, about the snap overseer that comes. You can’t predict that; you just have to be ready. It is about being on your toes and I love that. So many balls are coming from so many different directions.”

“What I can definitely advise any kid that’s out there trying to race, don’t listen to people who tell you you need a mental coach or you need someone to help control your mind.”

“You need to let it run wild and free and discover yourself. It is all about discovery. And only you can do it. No-one can tell you: Don’t do that because I have done it before. You have to experience it in order to learn and grow from it,” he added.

Those that have worked with the Briton know his strengths and the consensus is that in qualifying – like his childhood idol and acknowledged qualifying master Ayrton Senna – Hamilton appears to find an extra edge, a higher gear of sorts.

Former teammate, at McLaren between 2010 and 2012, Jenson Button recalled, “In the races we could have some great battles. He’d win a race, I’d win a race, and it was really close between us. But when it came to qualifying, it wasn’t. He was just immense.”

“With the car, even if the balance wasn’t quite there, Lewis was strong. He would drive the car from the rear. He didn’t mind oversteer on entry, apex, exit. He was a little bit more ragged than my style, but it works,” added Button.

Mercedes chief strategist James Vowles, who works closely with Hamilton, said, “Of all the drivers I’ve ever worked with, Lewis is the one who is able to quickly and dynamically react to a changing set of circumstances. That’s one of the key reasons as to why he is so good in qualifying.”

Mercedes non-executive director Niki Lauda, who is also privy to inside information regarding Hamilton, explained, “Lewis can certainly deliver. It means he sits in his car and says: It is one lap now, I have to get pole position.”

“He switches something on which very few people have, and this on-off from nothing to everything he is able to do in no time, and then he can squeeze out the last couple of tenths.”

“Easy to do that when you push hard, then you make a little mistake, you go too far, you brake too late, you do all these kinds of mistakes. But on his laps he does no mistakes and drives the car right to the limit on every metre of the circuit. That makes him different,” declared Lauda who started from pole 24 times in his illustrious career which spanned 171 grand prix starts.

Mercedes chief Toto Wolff knows what he has with his star driver and said after he watched him claim his tenth pole position of the season with a stonking lap around Suzuka last time out, “Lewis was untouchable. He just built up the performance level lap by lap and improved with every run. It was a day that shows why he is one of the best of all time.”

Statistics show that Wolff is correct, Hamilton surpassed Ayrton Senna’s record of 65 pole positions at the Canadian Grand Prix earlier this year, an emotional moment as he was gifted a helmet by the family of the late great Brazilian.

At the Italian Grand Prix Hamilton secured his 69th pole start, surpassing the all time record of the great Michael Schumacher.

Final word to Nico Rosberg, Hamilton’s former nemesis and Mercedes teammate until the end of 2016, “He’s one of the best of all-time in qualifying so it’s always going to be difficult to beat him. His natural speed is just immense.”