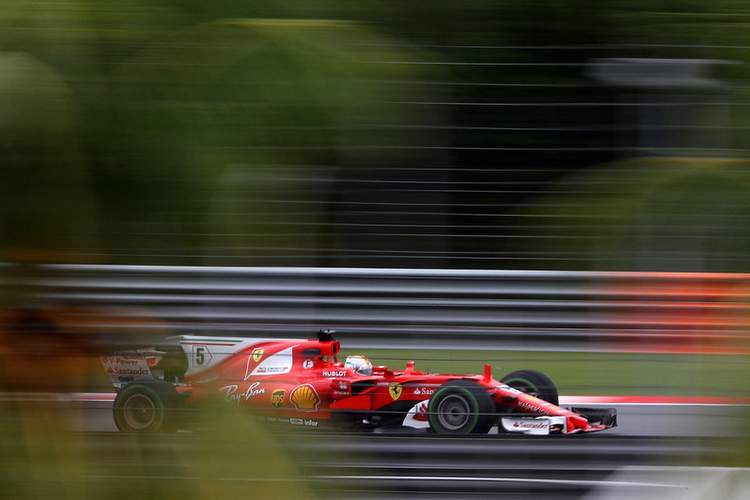 Ferrari ended day one of the Malaysian Grand Prix weekend fastest of all with Sebastian Vettel topping the timing screens ahead of teammate Kimi Raikkonen, but the session was cut short by ten minutes after Romain Grosjean crashed heavily.

Haas driver Grosjean struck an open drain cover on the apex of Turn 12 which destroyed his rear wheel and flung him hard into the tyre barriers in Turn 13, fortunately he emerged from the wreck unscathed.

The Frenchman told reporters afterwards, “I was just on the racing line and then suddenly I had a big hit on my rear right. Next thing I know the tyre wasn’t there any more and I was spinning and heading for the wall. Hopefully the drain cover stays in place tomorrow!”

Vettel’s benchmark time of 1:31.261, the fastest ever around the around the 5.5-kilometre Sepang track, and was six tenths up on Raikkonen’s best time, the German showing impressive pace throughout the session.

Vettel said after the session, “It’s always a bit more straightforward in the dry. This morning was a bit more mixed. This afternoon we didn’t get the running that we wanted due to the red flag, apart from that it was OK. Still some things we must improve.”

“Red Bull looked very fast in the mixed conditions this morning, in the damp and wet on the intermediate tyres. Overall I think it’s been a decent day. We will see what tomorrow brings,” he added.

Next up were the Red Bull duo who topped the FP1 morning session, in the afternoon Daniel Ricciardo and Max Verstappen were second and third quickest – the pair eight tenths off the top time.

Fernando Alonso surprised with the fifth fastest time in the McLaren featuring a updated barge board.

Mercedes appeared out of sorts and struggling to find the sweet spot on the first day at Sepang, with Lewis Hamilton sixth and Valtteri Bottas seventh but a whopping 1.3 seconds down on Vettel.

Silver Arrows boss Toto Wolff summed up, “It was a very difficult session for us. We struggled from the get go this morning, in the wet, in the dry, on all tyres. We need to find out overnight what it is.

Sergio Perez was eighth in the Force India with teammate Esteban Ocon tenth and Renault’s Nico Hulkenberg splitting the pink pair in ninth.

Frenchman Pierre Gasly, making his Formula 1  debut this weekend after being drafted in as a replacement for under-performing Russian Daniil Kvyat at Toro Rosso, was 15th fastest.

The 21-year-old, being evaluated as a permanent replacement for Renault-bound Carlos Sainz for next season, outpaced the Spaniard who was 16th after sitting out FP1.

The session was not restarted, as Formula 1 race director Charlie Whiting driving out in the safety car to inspect the damaged drain, with repairs clearly required before FP3 on Saturday. 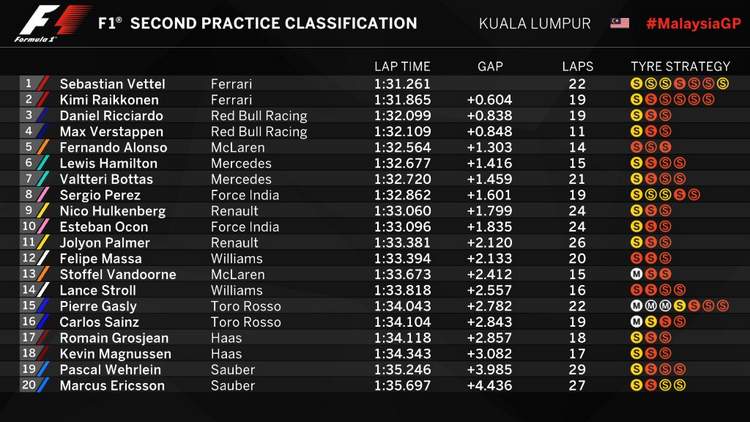