Boullier: We will have the same engine as Red Bull 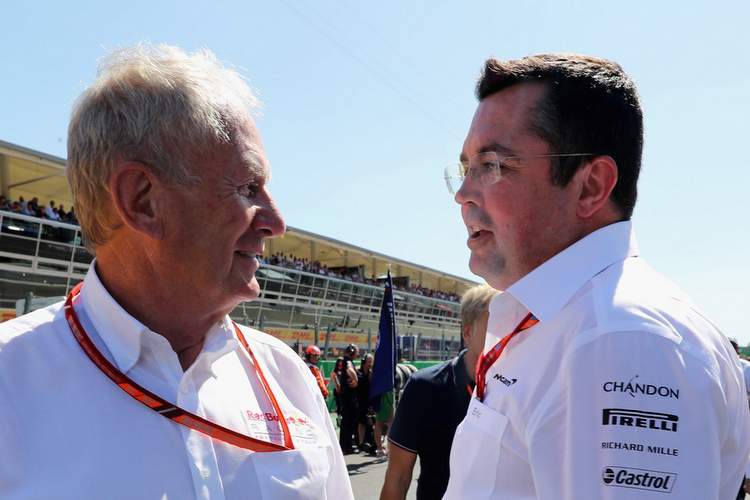 McLaren chief Eric Boullier is upbeat about his team’s future as a Renault customer from 2018 and beyond, and believes that with the French manufacturer the Woking outfit can again be a force in Formula 1 while admitting that parting ways with Honda was tough.

Boullier, a former Renault team principal, told the official F1 website, “We are ‘privileged customers’ with Renault. We will have the same engine and access to information as Enstone or Red Bull Racing, so this is a real partnership with Renault.”

“We also have the possibility to work with them – to put ideas in the box for the future that might be taken into consideration. That will allow us to influence in the future. But yes, a full works team is different from our situation in 2018.”

“But it is like in school: you look at the pluses and the minuses – and looking at all the pluses and minuses we made our decision, which we believe will be the best one for McLaren for at least the next three years.”

The McLaren-Honda saga is well documented, and although the final break came during the Singapore Grand Prix weekend, mortal damage was done to the partnership months earlier during pre-season testing in Spain.

Boullier explained, “The crucial moment was after the Barcelona testing, when we tried to work and help Honda to improve the situation in a very short time, including having discussions with the other engine manufacturers, and without going into details.”

“It became obvious that they again would miss the target that we had agreed for the season. Then by the summer we knew that we had to take a decision, to stay or not to stay.”

By ditching Honda power McLaren will also forfeit a substantial chunk of income provided by the Japanese manufacturer.

But Boullier believes that when the team becomes successful again they will be able to attract more sponsors, “Well, when you look at the last three years it’s been a proper disaster for us in terms of credibility and getting new sponsors.”

“And then you have to take the long-term view: in the next five years I am absolutely sure that we will go back to where McLaren belongs. And with this bouncing back we get our credibility back and it will rebuild our sponsor portfolio.”

“It might take two to three years. We are ninth in the championship – with a top engine I think we would be fourth right now and just on the FOM money we could cover the engine side, so it will not be a big risk on the monetary side.”

“Thanks to the shareholders who have been brave enough to take a sporting choice and not hurt McLaren. They could have said: Let’s wait until Honda wakes up.”

Asked if Fernando Alonso was a factor in the new deal, Boullier responded, “Yes and no. But to be honest, I don’t think he is in that stage right now. He is only interested – and he’s been saying this for months – in a competitive car. That is for him.”

“For us – McLaren – we are happy that the shareholders have made a sporting choice and not a business choice and changed the engine. McLaren’s DNA is to be competitive – the team has always been in the top three and we belong there again.”

“Today we know that we have a decent chassis, which would allow us to be in the top three again with an equal level engine, so for us as a business it is important to be competitive, no matter what role Fernando plays.”

“We had to make this decision for us. But if you want to be competitive you not only need an engine, you also need a driver. That is when Fernando comes into the picture. We did what we did for McLaren first – but the package includes also the driver.”

It is no secret that it was McLaren who ‘filed for divorce’ from Honda, but Boullier revealed that it was a painful process for both organisations.

Asked if parting was was hard he replied, “Very hard. The whole story for them, as it was for us, was to recreate the legacy of the past. On paper everything looked right. Just the way it’s been done was not right, obviously.”

“Luckily we managed to make it an amicable settlement and they understood that all the investment that they have made, they should get a reward from that at some stage. We can’t wait – but they can get the reward with somebody else.”

“I am so glad that they have decided to stay in Formula 1 and commit to another team. Personally I feel a bit sad that it didn’t work, but these have been very intense three years,” added Boullier.

Honda will power Toro Rosso from 2018, and there is speculation suggesting that Red Bull may shift from TAG Heuer (Renault) power in 2019 if Honda are competitive by then.

Big Question: Who is the big winner in the McLaren-Honda divorce?