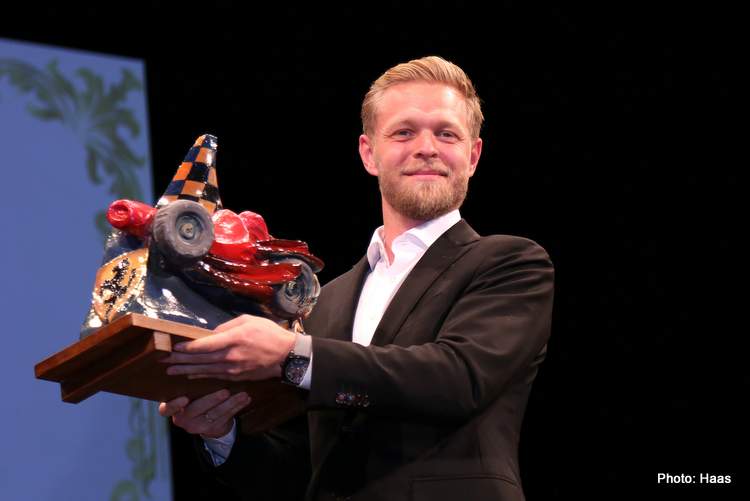 Kevin Magnussen picked up the prestigious Trofeo Lorenzo Bandini award on Sunday during a ceremony in Faenza Italy where Haas team boss Guenther Steiner was in attendance.

The award is named after legendary Ferrari Formula 1 driver Lorenzo Bandini who lost his life three days after suffering severe burns in a major accident at the 1967 Monaco Grand Prix. The award was initiated in 1992 by Bandini’s widow Margherita.

The trophy is a ceramic replica of Bandini’s Ferrari 312/67 car adorned with the number 18 created by the ceramist Goffredo Gaeta, is awarded for “a commendable performance in motorsport”.

Magnussen was chosen to pick up the award after his performance on his comeback season with Haas in 2022, after spending 2021 on the sidelines being dropped by Haas at the end of the 2020 season.

The Dane was jettisoned into the Haas seat after the team dropped Russian driver Nikita Mazepin and hit the ground running in a car he has never driven before, scoring points on six occasions.

A first ever career pole position

His fifth place in the Bahrain season opener being his best result, not to mention his first ever career pole position in Sao Paulo.

Magnussen was informed about being selected for the award back at Monza according to a statement by Haas that said: “We are proud to announce that Kevin Magnussen has been named the recipient of the historic Lorenzo Bandini award.

“Magnussen heard about the prestigious award in Monza and the award itself will take place in Italy on December 3, 2022.”

Magnussen said after picking up his trophy: “I’m very honoured to receive the Lorenzo Bandini Trophy, a local hero who enjoyed very good results with Ferrari.

“And when I think of all the great champions that have received this award in the past, it’s hard to understand why it was given to me,” the Haas racer concluded.

Magnussen finished the 2022 F1 season 13th in the Drivers’ Standings having scored 25 points. He will be joined by a new teammate in 2023, Nico Hulkenberg, who replaced compatriot Mick Schumacher.