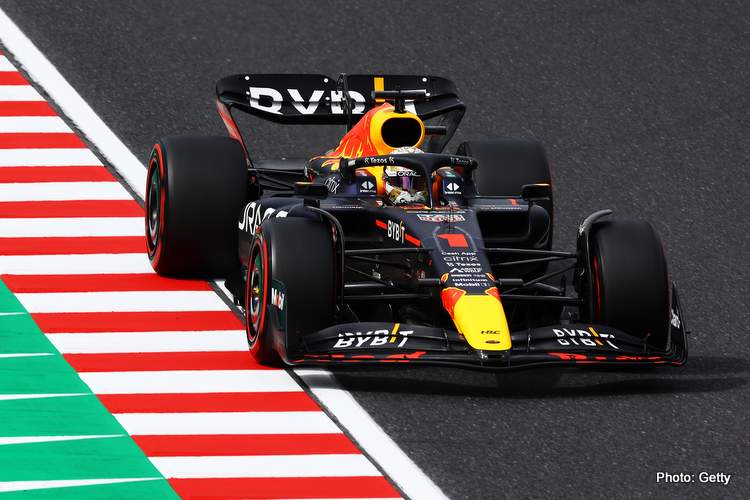 It was a busy session for all teams who had to make the maximum they could out of the final 60 minutes of practice with no rain before qualifying.

In the end, Verstappen was fastest by almost three tenths from Carlos Sainz, second in the Ferrari, as Charles Leclerc was only good for third in the sister Ferrari.

Nothing could be read into Friday at Suzuka as the heavy rain denied us any idea on where each team stood, especially as Saturday was expected to be dry, so all the times from FP1 and FP2 belong in the waste bin.

This meant all teams and drivers will have only one hour in FP3 to get their cars setup for qualifying and the race, which will make things interesting as to who will hit the nail on the head.

A critical session to dial in ahead of qualifying 👊#JapaneseGP #F1 pic.twitter.com/o3X1mwX0jf

Furthemore, the worst kept secret in Formula 1 was finally out of the bag as Pierre Gasly was announced at Alpine for 2023, as the impressive Nyck de Vries was also confirmed at AlphaTauri.

Back to racing; Mercedes were decently fast in the wet conditions so it will be interesting to see whether the return to the dry track will cause the W13’s pace to vanish, going back to business as usual.

The drivers did not waste any time hitting the track trying to make the most of the dry conditions in their final hour of practice ahead of qualifying.

Everyone is keen to get going for FP3#JapaneseGP #F1 pic.twitter.com/73ZpqqvrVC

George Russell was the first to head out on track, and was soon followed by Ferrari’s Carlos Sainz and Pierre Gasly in the AlphaTauri.

There was no clear trend in tyre choice as we had all three compounds on track at the same time, each team opting for their own thing.

Again Nicholas Latifi has a moment at the final chicane, going deep there. It happened so much one wonders how long will he get away with it.

Charles Leclerc later suffered from a big slide at Degner two, as Lewis Hamilton was warned by his team from guts of wind.

“Wind gusts look to be aligning with some of the snaps we’re having,” Hamilton is informed by his team.

Home hero, Yuki Tsunoda was not impressed by Fernando Alonso, complaining in is usual colorful language that the Spaniard “doesn’t know how to move”.

Halfway through the session, Max Verstappen lead the way with a 1:32.050, followed by Goerge Russell in second, almost one second slower as teammate Sergio Perez was third.

A mix of practice programmes on show at Suzuka

How we look with 30 minutes to go… 📊#JapaneseGP #F1 pic.twitter.com/S18haBfwqS

Shortly after that, Carlos Sainz took top spot from Verstappen, and Charles Leclerc put in a fast lap good for second, over four tenths slower than his teammate.

This session is now getting quicker and quicker 📈

Carlos Sainz goes fastest as he jumps on a fresh pair of softs#JapaneseGP #F1 pic.twitter.com/DEUkX1MDGj

At one point of the session, the 40-minute mark, Alex Albon put in an impressive lap in his Williams good enough for fourth. Not bad from the Thai. That didn’t last for long though, as despite how good he is, Albon cannot defy the law of physics and was soon stumbling down the order.

He goes fourth fastest with 20 minutes of the session to go#JapaneseGP #F1 pic.twitter.com/TR5XM4s1OJ

It was a busy session overall, as all teams an drivers hoped to make up for the missed running from Friday.

Max Verstappen’s fastest, session-topping lap was a 1:30.671 and 0.294s faster than Carlos Sainz, second in the Ferrari.

Carlos Sainz was chased closely by Charles Leclerc, third and only 0.015s off the pace of his teammate.

Fernando Alonso was in decent form in the Alpine, and was fourth fastest 0.649s off the pace of Verstappen, as Sergio Perez took fifth over eight tenths slower than his teammate.

Mercedes were back to their normal positions, as George Russell was sixth fastest 0.859s from the lead, as Lewis Hamilton was seventh, 0.059s further down the road.

Practice at Suzuka, complete. All eyes on Quali! 🔜 pic.twitter.com/oMgz9Y0cTt

Lando Norris was eighth fastest in the McLaren, with a 1:31.747, while his teammate Daniel Ricciardo was down in 11th in his first proper running in the updated MCL36. Ricciardo was 0.113s off Norris’ pace.

Esteban Ocon was ninth in the other Alpine over four tenths slower than Alonso, while Lance Stroll was tenth in the Aston Martin, 1.167s too slow. 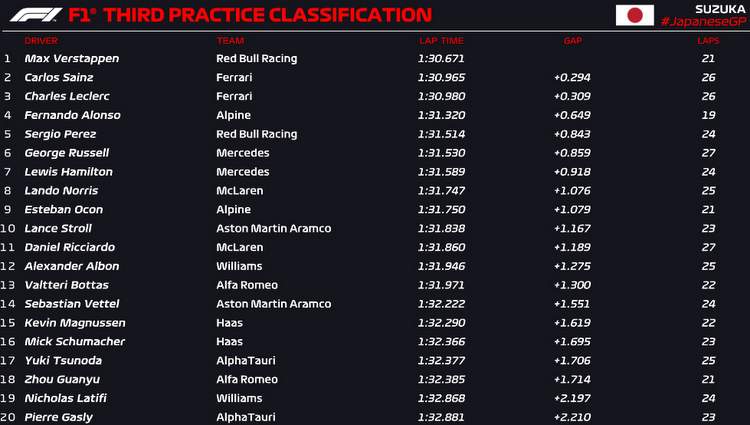