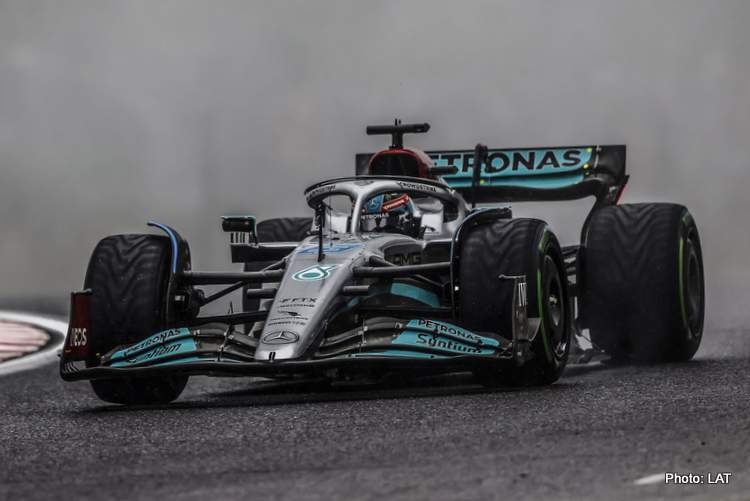 George Russell went fastest at the end of FP2 for the 2022 Japanese Grand Prix, as teammate Lewis Hamilton was second ahead of Max Verstappen.

Russell overcame early session problems with getting his tyres up to temperature to set the fastest time in FP2 which was another wet running session.

Lewis Hamilton was second fastest in the sister Mercedes, 0.235s off the pace his teammate, as Max Verstappen was third fastest for Red Bull.

Verstappen suffered from overheating in his tyres, evident from the fact that he was losing time to the Mercedes drivers in the final sector of the lap.

After initial plans of running tyres tests for Pirelli’s 2023 prototypes, those plans were scrapped as the tyres to be tested were dry slicks and the conditions never came close to drying up to run the test.

It wasn’t the most exciting start to the 2022 Formula 1 Honda Japanese Grand Prix weekend, as heavy rain rendered FP1 pointless, most drivers opting for limited running.

In the end it was Fernando Alonso who posted the fastest time followed by the Ferrari drivers, Carlos Sainz and Charles Leclerc, after which conditions worsened meaning no more improvement was possible.

The first practice session was not short on drama though, as Mick Schumacher binned his Haas heading back to the pits after performing practice starts.

Haas announced the German will not take part in FP2, as the accident meant the #47 Haas VF-22 will require a chassis change.

With contracts talks between Haas and Schumacher reportedly underway, this is the last thing the young driver needs right now.

Mick will be unable to participate in FP2 due to the requirement of a chassis change following his incident at the end of FP1.#HaasF1 #JapaneseGP pic.twitter.com/73Df8ThZQz

FP2 will be a 90-minute session this time, as half an hour was added to the original time to allow for some tyre testing for Pirelli’s 2023 tyres.

However the compound to be tested are dry ones, so if the conditions remain wet, the test will not take place, but the session time will not be reduced.

It will remain 90 minutes, but the tyre testing session will be rescheduled for the Mexican Grand Prix.

It will be a brutal session to watch in rainy conditions, and limited running with most drivers preferring to remain in their team garages, and the 90 minutes time would not help.

As in FP1, Nicholas Latifi was the first out on track sampling the wet conditions, and reports the track is almost ready for Intermediate tyres.

“There’s a little stream at Turn 8, but everywhere else is okay for inters,” the Canadian said over team radio.

Carlos Sainz and Daniel Ricciardo soon follow Latifi out on track, noting that the Ricciardo will benefit from McLaren’s upgrade that was introduced in Singapore on Lando Norris’ car. Not the ideal conditions to test a car update.

Latifi had a moment at the chicane, and went into the escape road, and reporting that his car “felt weird” over the team radio.

Latifi turns in before he reaches the chicane and is forced to turn back#JapaneseGP #F1 pic.twitter.com/zhpvge1V4X

Carlos Sainz, fastest of all with 20 minutes from the session elapsed was asked by Ferrari for track conditions update.

“Clearly extreme now, I mean we could Inter, but too much risk for FP,” the Spaniard said, after running wide and having a gravel excursion. No damage though.

George Russell seems to still be suffering with his tyres in wet conditions, he reported: “The rears are nowhere.”

However, Lewis Hamilton soon after that reported the track was improving, saying over the team radio: “It’s almost Inters.”

George Russell soon heads out on track with Intermediate tyres bolted to his W13, and goes fastest immediately, with a 1:45.197.

Hamilton soon switched to Intermediates as well and went fastest, 1:43.536, as Max Verstappen soon after heading out to the track took over the top spot with a 1:43.137.

With 40 minutes gone, Charles Leclerc set out on track and went directly into the runoff area at the hairpin, stopping just before the barriers and bringing out a Yellow flag, the driver reporting a strange feeling in his front left tyre.

Slipping off at Suzuka 😬

Leclerc and Tsunoda hit the gravel but escape and make their way back to the track#JapaneseGP #F1 pic.twitter.com/FnUD8TfY6e

Yuki Tsunoda has had a moment of his own as well, with a trip down the gravel trap at Degner, but was carrying enough speed not to get stuck.

The rain started to ease off after the 45-minute mark, with not further downpour expected for 30 minutes which explains the improving times, as Russell dislodged Verstappen from top spot.

Notably, FP1 leader Fernando Alonso took his time to head to the track, only ding so with 43 minutes remaining on the clock.

“Front tyres are getting way too hot through the lap,” Verstappen reports to Red Bull, as the Dutchman seems to be losing time in the last sector.

Russell seemed to make his tyres work as the session progressed, as after a series of trading blows with Hamilton and Verstappen, he topped the session with a 1:41.935, as 35 minutes remain from the session.

Sergio Perez had an off-track trip of his own – almost a carbon copy of Leclerc’s earlier incident – as he shot into the runoff area at Turn 11, as his RB18 understeered having barked late for the corner. No damage done for the Mexican.

Sergio Perez is the latest driver to surf through the gravel 🏄#JapaneseGP #F1 pic.twitter.com/PUm1LxNtqa

Charles Leclerc, heads out on track again, and soon reports that all is not good. He said: “Yeah the feeling is totally bad for some reason. I will try to make it better.”

That came after the Monegasque spent over ten minutes in the Ferrari garage, as the team was reportedly working on a brake problem.

With 15 minutes remaining from FP2, only six cars remained on track as all the others returned to their garages, McLaren in particular wrapping up their session. McLaren clearly went through their one-hour program, and with tyre testing scrapped had nothing more to do.

Sebastian Vettel spent some time on track, with some long runs with Intermediate tyres, as Verstappen was also running behind the German, maybe testing if he can follow another car in these conditions.

Lance Stroll has a slight off moment at Turn 11, running wide, but keeping it together, as Verstappen concluded a 25-lap run on Intermediates.

George Russell posted a lap time of 1:41.935 to go fastest in FP2, which was over three tenths faster than the fastest time set in FP1 by Fernando Alonso.

Lewis Hamilton was second fastest behind his teammate, 0.235s slower, as Mac Verstappen was third fastest 0.616s further down the road, the Dutchman not at one with his RB18 around Suzuka yet.

Sergio Perez was fourth fastest in the second Red Bull, 0.048s off his teammate’s pace only, as Kevin Magnussen was fifth fastest, 1.252s down from Russell’s time.

The Dane set his time 1:43.187 after an extended stay in the Haas garage as his team performed a major setup change on his car and set his time in the dying moments of FP2.

The best place Ferrari was that of Carlos Sainz, sixth fastest and 1.269s off the pace, followed by compatriot Fernando Alonso on seventh 0.329s slower.

Valtteri Bottas continued his strong showing, featuring in the top ten once again, and was eighth fastest, 1.798s slower than the session-topping time.

Esteban Ocon was ninth for Alpine, as Zhou Guanyu finished tenth in the other Alfa Romeo.

Charles Leclerc was 11th fastest in the other Ferrari, 2.774s off the pace, the Monegasque having a scruffy session and avoiding a crash early on. 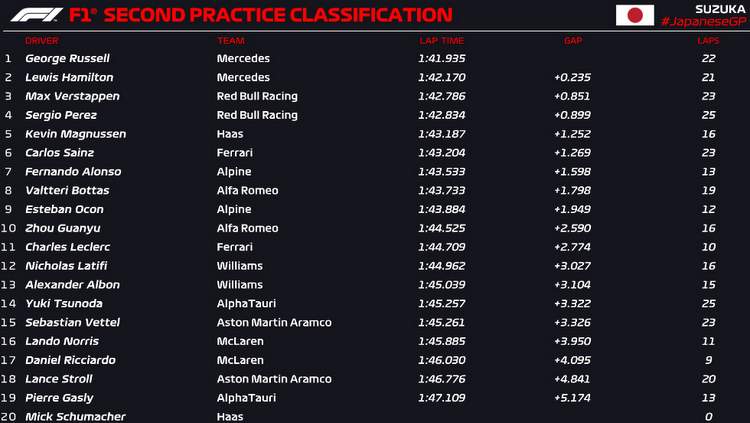