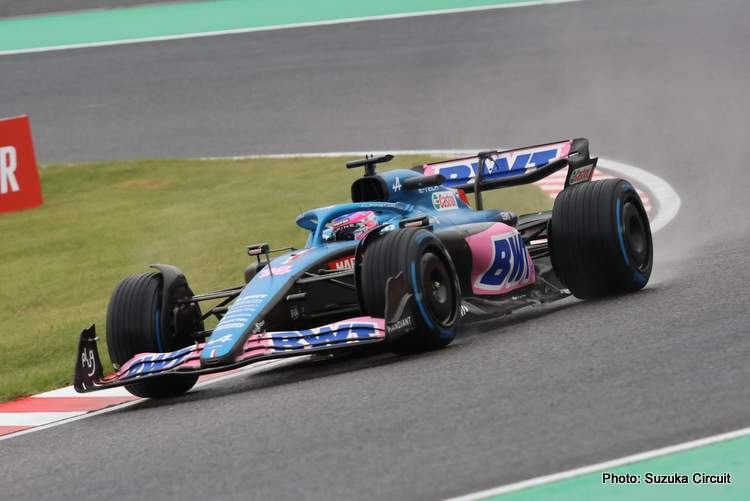 Formula 1 was off to a rainy start for proceedings in Suzuka as Fernando Alonso went fastest at the end of FP1 for the 2022 Japanese Grand Prix.

FP1 was as unrepresentative as practice sessions could be, with heavy rain meant very limited running was done with some drivers not leaving their garages for over 45 minutes of the one-hour session.

In the end, it was Fernando Alonso who went fastest of all with a 1:42.248 set on Intermediate tyres, 0.315s ahead of Carlos Sainz in the Ferrari.

Charles Leclerc was third fastest, 0.071s behind his teammate.

If it’s not Singapore, then it will be Japan where Max Verstappen will secure his second consecutive Formula 1 Title and so we head into the Japanese race weekend with anticipation.

It would be so fit for Red Bull and Verstappen to celebrate Title glory in Japan, home of Honda – the race is also called The Formula 1 Honda Japanese Grand Prix – whom they have to thank for the impressive power unit bolted to the back of the rapid RB18. Honda may have left F1 but they are basically the ones building this power units.

Also ahead of grand prix weekend, Red Bull and Honda announced the Honda logo will feature on both Red Bull and AlphaTauri cars starting this weekend and till the end of the season, a step worth pausing and looking at in light of the failed talks between the energy drinks outfit and Porsche.

Continuing the charge and strengthening our relationship with @Honda in 2022 👊

But how great is it to have Suzuka back on the calendar?! Thanks to Covid-19 we haven’t been there since 2019, when Sebastian Vettel was still a Ferrari driver and Mercedes were cleaning up Titles – Valtteri Bottas won that race by the way.

The circuit is a driver and fan favourite and the Japanese fans just love their F1 and are keen to show that to the whole world.

Charles Leclerc said he expects Red Bull to be strong as Suzuka requires a setup similar to Spa, and we all saw what happened there.

It’s Yuki Tsunoda’s first time racing at home, and the AlphaTauri is commemorating that with a special helmet design, but hopefully the home hero would have a clean error-free weekend.

this is a piece of art 😍 @yukitsunoda07 pic.twitter.com/w7NhvKyEI6

Other than that we have the cost cap saga to shed some dark shadows over the weekend, as if the darks clouds and rain is not enough, but let’s hope our F1 weekend in Japan is worth the wait.

Current conditions ahead of our first practice session of the weekend 🌧️

Let’s start with tyre options as Pirelli are on the harder side of things this weekend in terms of tyre choice, with their C1 (Hard), C2 (Medium) and C3 (Soft) compounds made available for the teams this weekend.

These are the #Fit4F1 compounds in action for the #JapaneseGP this weekend. Which tyre will provide the most performance around the Suzuka Circuit? 👇🇯🇵#F1 #Pirelli #Pirelli150 @F1 pic.twitter.com/FJYQfzwbxV

The session started with heavy rainy conditions, most drivers not in a hurry to jump in their cars, but not Kevin Magnussen who was the first to head out on track with Wet tyres bolted to his Haas for an installation lap.

He was followed by home hero Yuki Tsunoda, who also soon returned to the pits reporting “a couple of rivers in sector 1” after his exploratory lap.

Kevin Magnussen went for another lap to check things out but then boxed after that.

Nicholas Latifi, leaving Williams at the end of this season and probably F1 overall, has never driven an F1 car at Suzuka, and was soon out on track sampling it for the first time.

Mick Schumacher followed suit as Lance Stroll also took to the track and even went on to went for the first timed lap of the session, but he aborted with Schumacher posting the first time, a 1:52.537.

Stroll gave some encouraging feedback over the ream radio; he said: “The track is quite dry, there’s not so much standing water.”

Sebastian Vettel, Alex Albon and both Ferraris of Charles Leclerc and Carlos Sainz head out on track. Leclerc reported back to the Ferrari garage: “I actually think we could already go on inters.”

Leclerc went to the top of the timing screens with a 1:48.104, but where’s Max Verstappen? Still in the pits and not even in his car.

Over 20 minutes into the session, Sainz had some potentially bad news for his teams; he reported: “There’s a bit of a noise in the engine, I thinks it’s the turbo, check.”

But Sainz then goes fastest of all, as the times started improving with more cars running and the track improving.

Halfway through the session, Wet tyres were still the way to go, as not driver even bothered to try and switch to the Intermediates.

Max Verstappen, the Championship leader finally head out on track, over 30 minutes into the session, the Dutchman the first driver to use the Intermediate tyres.

The Red Bull ace was informed that rain will be returning within five to tend minutes, hitting Turns 13 and 14 first.

Nicholas Latifi brought out the first Yellow flag of the session, a brief one though, as he locked up going onto Turn 11, but no damage done.

Verstappen immediately went over 3.5s fastest than the best time set on Wet tyres, as Esteban Ocon – also on Intermediates – relegated the Dutchman to second, 0.340s faster, a 1:43.022 from the Frenchman.

As the session entered the final 15 minutes, Mercedes drivers Lewis Hamilton and George Russell finally made their appearance on the timing screens, and Russell was complaining about his tyres.

“The tyres are not biting, it’s so weird, really sliding a lot,” Russell reported.

The rain intensified in the final ten minutes of the sessions with many drivers switching back to full Wet tyres, after Charles Leclerc was caught out by the worsening conditions at Spoon.

All drivers were back in the pits toward the final five minutes of the session, as only the Alfa Romeo pair, Zhou Guanyu and Valtteri Bottas doing some running on Wet tyres.

All the drivers set out on Wet tyres in the end to do some practice starts, as Lance Stroll reported power unit issues, his car going into “limp mode”, and was asked to perform a system restart by the team. It did not work.

Schumacher slides off at the end of the session

He was on his way back to the pit lane but crashed into the barriers #JapaneseGP #F1 pic.twitter.com/y8p1xfhcay

Just when everyone thought it was over, Schumacher had a massive off going into Turn 7, wrecking the front end of his Haas.

The German was on his way back to the pits after performing a practice start. That’s not what he needs now as he fights for his seat at Haas.

Fernando Alonso posted a 1:42.248 and was fastest of all, followed by compatriot Carlos Sainz, second in the Ferrari and 0.315s behind.

Charles Leclerc took third in the sister Ferrari, 0.386s behind Alonso, after surviving a moment at Spoon with an excursion through the gravel trap.

Esteban Ocon was fourth fastest on the other Alpine, 0.744s off his teammate’s time as Kevin Magnussen was fifth in the Haas, 0.236s further down the road.

Max Verstappen was sixth fastest after a bried appearance on track, with a 1:43.362 on the board, 1.114s off the best time of the session.

Before crashing on his way back to the pits, Mick Schumacher set the seventh fastest time of FP1, 1.513s off the pace. as Lando Norris was eighth fastest for McLaren, 0.128s behind the German.

Valtteri Bottas was ninth fastest in the Alfa Romeo, as Sergio Perez rounded off the top ten, the Mexican 1.986s down from the benchmark time. 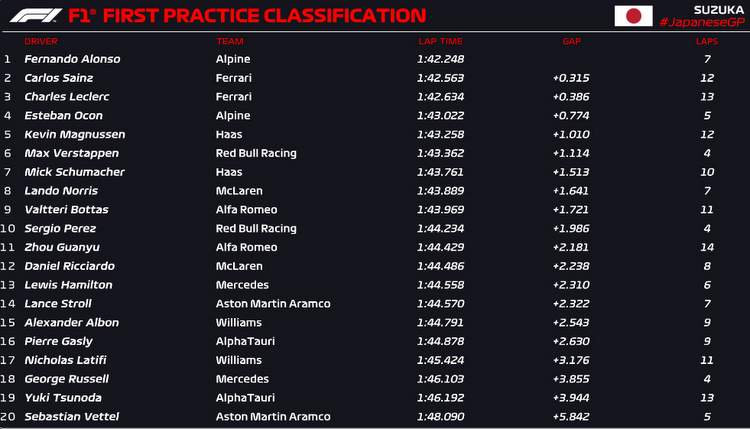