Russell: Narrow sidepods not off the table for 2023 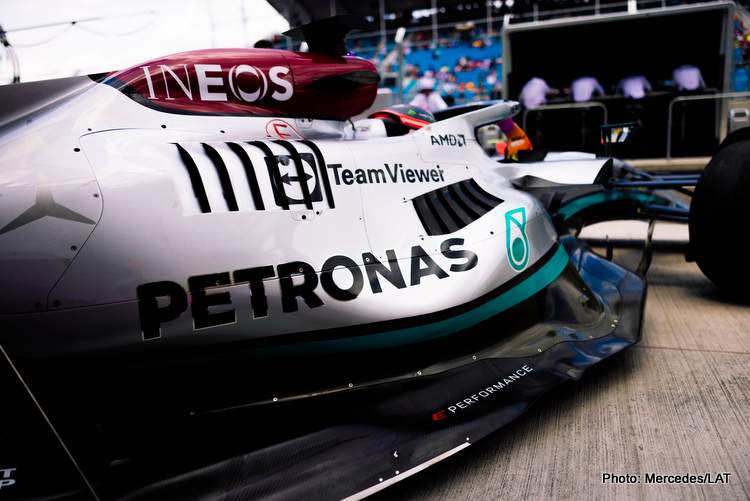 George Russell revealed that, despite the W13 being a woeful piece of Formula 1 kit, its narrow sidepod design is not off the table as the team designs the 2023 Silver Arrow.

The W13 turned heads when it showed up at Bahrain’s pre-season testing at the start of this season, with its innovative non-existing sidepods, but the positives ended there, as the car turned out to be a Silver disaster on four wheels.

Mercedes kept the faith with the design, and made good use of the opportunities that came their way, as at least one of their drivers – Lewis Hamilton and George Russell – made it to the podium 11 times on 16 races.

George Russell in particular has seven podiums to his name in 2022 and – except for the 2022 British Grand Prix, where he caused a first-lap pileup sending Alfa Romeo’s Zhou Guanyu into the barriers in spectacular fashion – was in the top five for all the races so far.

After securing third in the 2022 Italia Grand Prix, Russell was quizzed about Mercedes’ plans for their 2023 single seater, and if the “zeropod” will carry on.

The sidepods are not Mercedes’ performance differentiator

“But ultimately whether we have the wide sidepods or the narrow sidepods that isn’t the performance differentiator, there is more to it,” the Briton pointed out.

Mercedes have shown inconsistent flashes of speed at some F1 venues this season, and Russell commented: “I think we understand exactly why at circuits like Zandvoort and Budapest why we were competitive.

“We understand why at circuits like this [Monza] and Spa we were uncompetitive. That doesn’t mean that we can solve the issues overnight.

“But we’ve got to keep on developing this car and next year will sort of be an evolution of this and I think now we do have a totally clear direction of how to develop the car,” the eight-time podium sitter added.

With six races remaining this season, Russell sits fourth in the Drivers’ Standings, seven points behind Sergio Perez in third.

Mercedes are third in the Constructors’ Championship, 35 points behind Ferrari who are second, as Red Bull lead the way a whopping 139 points ahead of the Scuderia.