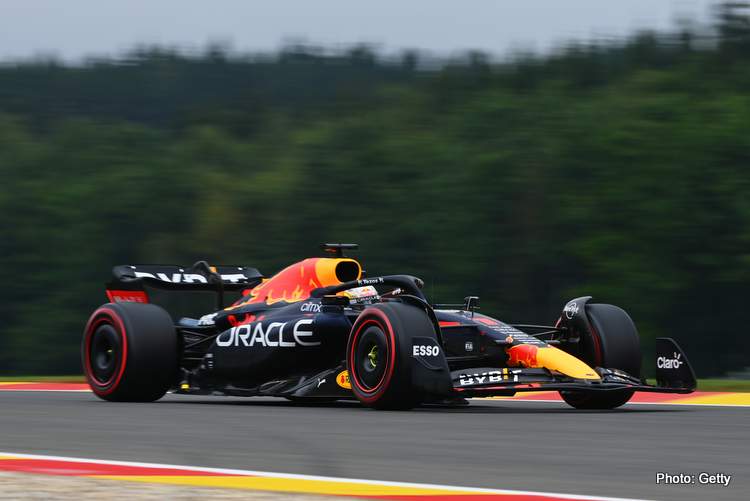 Reigning Formula 1 Champion Max Verstappen went fastest of all in FP2 for the 2022 Belgian Grand Prix, with a lap time that left Charles Leclerc scratching his head.

Verstappen finished the second practice session over eight tenths ahead of Leclerc in the Ferrari, while McLaren’s Lando Norris was third fastest.

As in first practice session, the unpredictable weather at Spa came into play as the rain hit the track with around ten minutes remaining.

FP1 was an underwhelming affair to be honest, but with two Ferraris and a Red Bull being the top three, it can be said that as for now, TD039 is not putting any of this year’s Title contenders in a disadvantage yet, but it is still early days.

What was interesting though, was the number of drivers deciding to take on new power unit components, the highest profile of which being Max Verstappen and Charles Leclerc who will both be starting from the back of the grid, which might make for an interesting fight between the two come Sunday.

Also this means the Mercedes pair may have a crack at a decent result during the race, that is if they can overhaul Carlos Sainz and Sergio Perez who will be holding the fort for Ferrari and Red Bull at the front.

Rain came quite late in the session that was run under some really gloomy clouds which begs the question whether this year’s race will end up being the same wet farce that was the 2021 version.

The weather forecast does not show any rain for the rest of the weekend, but you ca never know with the Ardennes.

The session started under dry conditions, but Carlos Sainz reported over the team radio that the track was a bit more damp than expected. However the forecasts showed there was a 40% chance of rain during FP2.

Out come the drivers for another 60 mins of practice 🙌#BelgianGP #F1 pic.twitter.com/kPf3eyGTo5

All the drivers chose either the Hard or Medium compound to start with , except for Daniel Ricciardo and Mick Schumacher who went out on the Soft compounds.

Pirelli brought their mid-range tyre compound for Spa, the C2, C3, and C4 to Spa after the summer break.

We’re back and so are our tyres. From hardest to softest, these are the compounds in action for the #BelgianGP!
👏👏#F1 #Fit4F1 #Formula1 #Pirelli #Pirelli150 @F1 pic.twitter.com/q6689vQM9E

George Russell complained about his Hard tyres over the team radio claiming he was unable to put any heat into them, 15 minutes into the session, as teammate Lewis Hamilton had an off-track excursion going into La Source.

Both Mercedes drivers are struggling to get the hard tyres working

Almost halfway through the session, the drivers returned to the pits to bolt on the Soft tyres before setting out on some qualifying runs, and maybe give us some insight on their true pace.

The qualifying runs saw Max Verstappen rise to the top of the field with the Ferrari of Charles Leclerc and McLaren’s Lando Norris.

Halfway through the session and it’s Max on top #BelgianGP #F1 pic.twitter.com/xmuQ4GrI0c

As the session entered the final ten minutes, the rain arrived as all the teams were going along with their business doing some heavy fuel runs.

That saw various drivers having some moments around the track, namely Lando Norris and George Russell the former running off at Les Combes, the former at Eau Rouge.

Mick Schumacher almost got beached in the gravel at Turn 7 but managed to keep going.

The rain is also causing problems for Mick Schumacher

The Haas driver has now escaped the gravel and headed back to the pits#BelgianGP #F1 pic.twitter.com/QUNBbmyBPV

In the end, al drivers head towards to start/finish line to do some practice starts

Lando Norris was a surprise third in the McLaren but was over one second slower than Verstappen.

Lance Stroll seemed to be in the groove as he was fourth fastest for Aston Martin 1.128s off the pace, as Lewis Hamilton was only fifth fastest, 0.244s behind the Canadian.

Fernando Alonso clocked a 1:46.975 good for sixth as George Russell was 0.067s behind the Spaniard in eighth.

Daniel Ricciardo went ninth fastest for McLaren, 1.748s off the pace, as Sergio Perez was a lowly tenth in the other Red Bull. 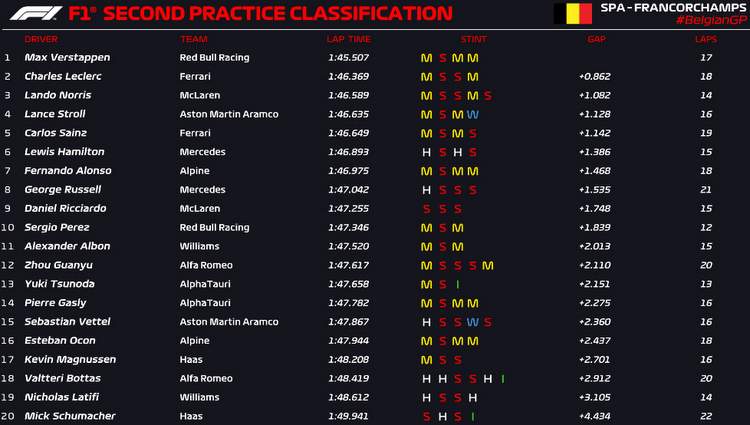