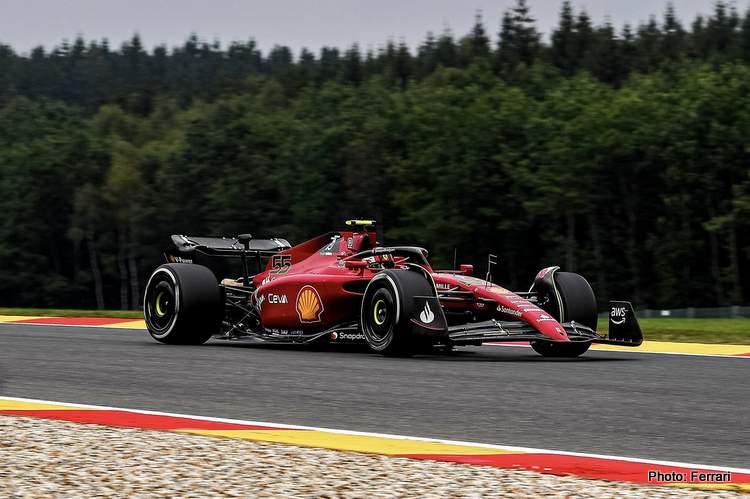 Carlos Sainz was fastest at the end of FP1 for the 2022 Belgian Grand Prix, with Charles Leclerc a close second.

A Red flag in the final 20 minutes of the session caused by Kevin Magnussen’s Haas who broke down on track, as well as a late rain shower meant that non of the other drivers, namely Max Verstappen could improve.

The Dutchman ended up third fastest behind the Ferrari duo.

Formula 1 sent us off into the summer break with some interesting developments to ponder, starting with Sebastian Vettel’s decision to retire at the end of this season, following almost immediately by Fernando Alonso’s decision to jump ship to Aston Martin replacing the German.

From their matters became interesting as Alpine announced their reserve driver Oscar Piastri would be promoted to replace the departing Spaniard only for the Australian to deny his approval, as he was linked with Daniel Ricciardo’s seat at McLaren.

With McLaren announcing Ricciardo will be leaving the team at the end of 2022 with a big severance cheque, another piece of the puzzle was put in place, as we still wait on McLaren’s confirmation of Piastri alongside Lando Norris, while we anticipate where Ricciardo will be landing, as he adamantly claims he still has unfinished business in F1.

On another hand, the FIA ratified the power unit regulations for 2026, and Audi wasted no time announcing their F1 plans, which was somehow underwhelming as they only confirmed they will be a PU supplier, still finalizing their chassis plans. Given the name and size of Audi, a grander announcement would have been more fit.

Porsche’s plans are yet to be announced, however, their tie-up with Red Bull is the worst kept secret in the paddock, as their official announcement will provide the finer details of the agreement.

The FIA also announced the revisions for the technical regulations for 2023 to sort out ‘porpoising’ with their technical directive TD039 fully effective in Spa, which for the first time in years, debuted some revisions on the track covering several corners, run-off areas, as well as a new track surface.

Will Red Bull and Ferrari slow down, while Mercedes goes faster? Let’s see what Spa tells us…

News emerged ahead of FP1, that Charles Leclerc will be receiving a grid penalty, starting his race from the back of the grid as Ferrari have decided to install a new power unit on the #16 F1-75, including the newly upgraded hybrid system.

Not a good start for the Monegasque’s quest to close the 80-point gap to Max Verstappen, but the fact that the latter will also be starting from the back of the grid due to extra power unit elements as well will serve as some consolation.

FP1 began under some really thick clouds, but the track surface was bone dry as action resumed for the final part of this 2022 season.

It’s almost time to get the second half of the season under way 🙌#BelgianGP #F1 pic.twitter.com/yO4M7nPeft

Mercedes also debuted an updated floor, front wing endplates, and a revised rear wing. The eight-time Constructors’ Champions are celebrating 55 years of AMG this weekend with special retro numbers on their cars.

Mercedes are running a special AMG logo and retro number on the sidepods to celebrate 55 years of AMG this weekend #BelgianGP #F1 pic.twitter.com/pZZeYDE39F

Red Bull brought a new engine cover and rear wishbone shroud, while Ferrari has a new rear wing and new beam wing for their F1-75.

AlphaTauri had Liam Lawson, who currently drives in F2 for Carlin, in the seat instead of Pierre Gasly as mandated by the regulations that require teams to give young driver some track time in F1 cars during practice sessions.

Liam Lawson is in for Pierre Gasly for FP1 🔄#BelgianGP #F1 pic.twitter.com/nHUAFVmaQz

Leclerc wasn’t off to a comfy start to FP1 as he had a new seat on his Ferrari which wasn’t to his liking, and was consequently changed during the session.

Valtteri Bottas returned to the pits after completing two laps only as the team confirmed they were investigating a technical issue on his car.

Kevin Magnussen brought out the Red flags with a little over 20 minutes remaining from the session as his Haas grounded to a halt exiting from Turn1.

Magnussen has a problem and is stationary out on track just after Turn 1 #BelgianGP #F1 pic.twitter.com/0LTZ5QXoFz

The session was resumed less than ten minutes remaining on the clock, but no meaningful running was possible as rain soon hit the track.

Carlos Sainz clocked a 1:46.538 to go fastest in FP1, as Charles Leclerc was second fastest, 0.069s behind his teammate.

Max Verstappen was third fastest, 0.217 off Sainz’s time while George Russell was 0.641s further down the road in fourth, the Briton trialing Mercedes’ new floor.

Daniel Ricciardo was seventh fastest for his soon-to-be former team, 1.543s away from the top, ahead of Yuki Tsunoda who was eighth fastest in the AlphaTauri two tenths slower than the Australian.

Lewis Hamilton was ninth fastest in the un-updated Mercedes 1.882s slower than Carlos Sainz, as Sergio Perez round off the top ten 0.054s further down the road from the Briton. 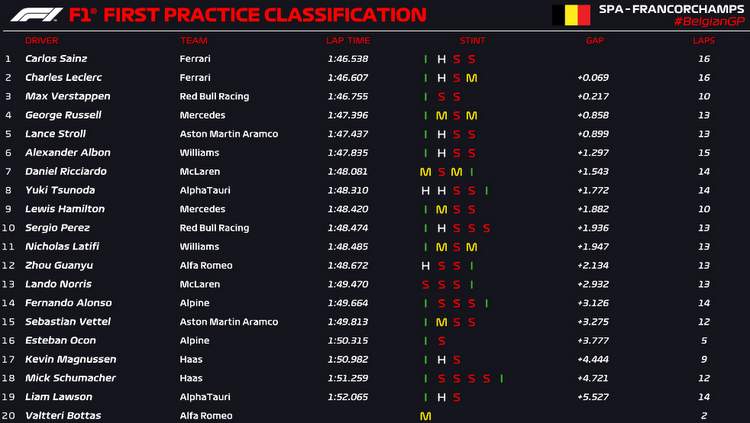