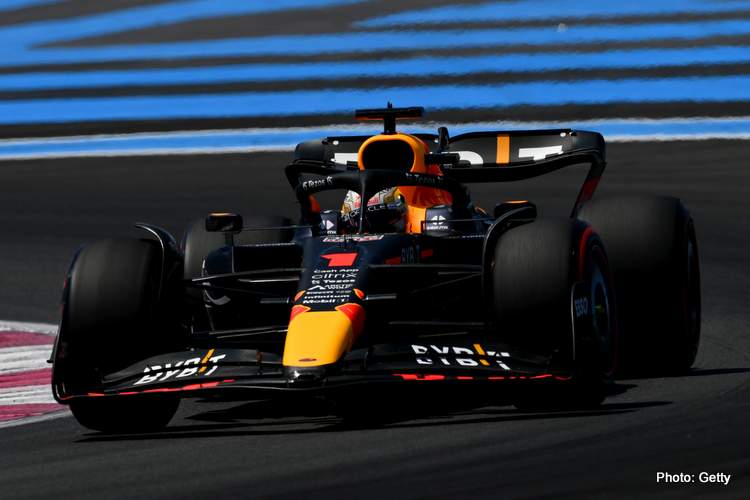 Max Verstappen went fastest of all at the end of FP3 for the 2022 French Grand Prix, going faster the both Ferrari drivers by a considerable margin.

Whatever Red Bull did to their RB18 on Friday night seems to have worked miracles, as Verstappen was clearly faster than Charles Leclerc and Carlos Sainz regardless of the tyre compound bolted on his car.

As a result he ended FP3 fastest of all, over three tenths faster than Carlos Sainz, which could have been more, as Verstappen was hampered on his final flying lap by Mick Schumacher in the Haas.

Charles Leclerc was third fastest, over six tenths off the pace, which should set things up nicely for qualifying later today.

Ferrari have shown great pace over the course of FP1 and FP2 on Friday at Le Castellet, Charles Leclerc topping the first session, Carlos Sainz fastest in the second, but long runs in the afternoon showed high tyre degradation on Leclerc’s car, as his times plummeted quite fast.

On the other hand, Red Bull were clearly not where they wanted to be with their RB18, as Max Verstappen was over half a second down on Sainz’s time on Friday afternoon, but the reigning Formula 1 Champions long runs showed a brighter picture in terms of consistency and tyre wear.

Mercedes had to be disappointed as all the promise and optimism evaporated when their minimum gap to the top turned out to be over seven tenths if George Russell’s best time from FP2 is considered, while Lewis Hamilton admitted his team was not spectacular at Paul Ricard.

Despite being the final chance for the teams to finalize their car setups, almost ten minutes of the session went by as almost half of the cars remained in their garages, including the Ferraris of Charles Leclerc and Carlos Sainz. The Red cars were out on track with 45 minutes remaining from the session,

Halfway through the session, Leclerc has a moment at Turn 12 while on his long run, as he lost control over his Ferrari, but with the huge run-off areas at Paul Ricard, the only damage was for the tyres.

Charles Leclerc finds himself in a spin 🔄😲

Other than Leclerc, Sergio Perez and Carlos Sainz have both been wide at Turn 11, while Lando Norris has been off-line at Turn 3.

During FP3, Ferrari confirmed that Carlos Sainz will be starting from the back of the grid, as the team decided to give him a fully new power unit.

The Spaniard will be joined by Kevin Magnussen at the back, as Haas announced they have changed a number of power unit components on his car overnight, an internal combustion engine, a new turbo, a new MGU-H, and a new MGU-K.

Overnight we changed a number of power unit components on Kevin’s car and consequently will be subject to a grid penalty for tomorrow’s race.#HaasF1 #FrenchGP pic.twitter.com/TMAYA1OKID

Haas team boss Guenther Steiner explained the reasoning for giving Magnussen’s a new power unit, and said to Sky Sports F1: “It’s disappointing but we have to do it and introduce a fourth engine at some stage, so we decided to do it there. It is what it is.

“We know that Kevin can race strong and you can overtake here so hopefully we can make a few positions up.

“It will be difficult for him, starting at the tail end, to get into the points but we still need to practice and get the tyres to work properly,” Steiner concluded.

Ferrari and Red Bull seem to be on diverging tyre strategies for the race, as the Scuderia started FP3 on Hard tyres, while the energy drinks outfit sent both drivers out on Mediums.

The foot cam was on duty once again during FP3 with Lando Norris. You can’t get enough of this.

The pedal cam is BACK! 😍

Max Verstappen was mainly focused on long runs. Maybe Red Bull are trying to avoid the tyre degradation problems that cost them the race win in Austria two weeks ago?

With twenty minutes remaining from the session, the Ferrari’s bolted on new Soft tyres for a qualifying run, but they could not go faster that Verstappen’s time, registered at the start of FP3 on Mediums!

Leclerc was one tenth off Verstappen’s time, while Sainz was over three tenths down after their first flying laps on the red-striped tyres.

Sainz improved on his second run on Softs going fastest by over a tenth, just as Red Bull head out on track with new Soft tyres, with under ten minutes remaining from the session.

Charles Leclerc sent out a worrying message for his team over the radio saying: “My tyres are dead on the second lap, I don’t know why…”

Max Verstappen will be heading confidently into qualifying on Saturday afternoon at Paul Ricard, as his fastest lap in FP3, a 1:32.272 put him 0.354s clear of Carlos Sainz in second, and 0.637s faster the Charles Leclerc in third.

Lewis Hamilton was fourth fastest for in the Mercedes, and 0.983s off the pace, with Sergio Perez right behind him in fifth 0.038s behind the Briton.

George Russell was sixth fastest in the sister Silver Arrow, 1.104s off the pace, which is worrying for Mercedes as he gap to the leaders seems to have increased this weekend.

Fernando Alonso, out of the top ten in FP1 and FP2 on Friday, put his Alpine in seventh 1.233s down on Verstappen session-topping time.

Alex Albon continued his strong form in France finishing the final practice session eighth fastest with a 1:33.558, with Lando Norris 0.111s further behind in ninth.

Yuki Tsunoda rounded off the top ten for AlphaTauri almost one and a half seconds from the benchmark time. 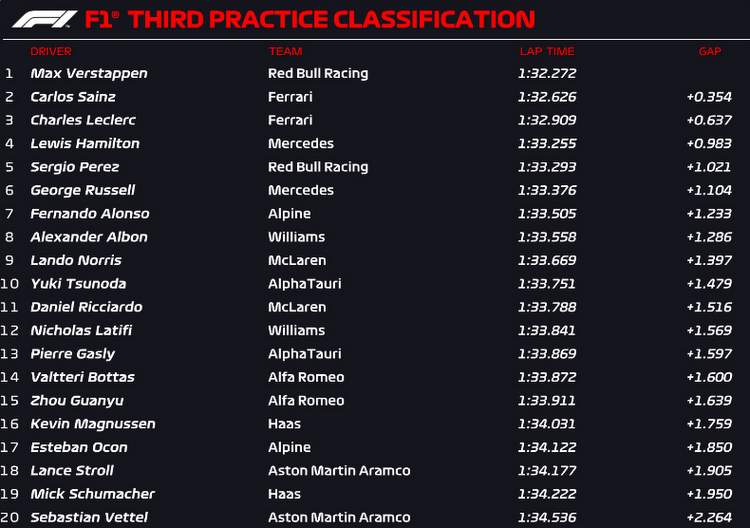