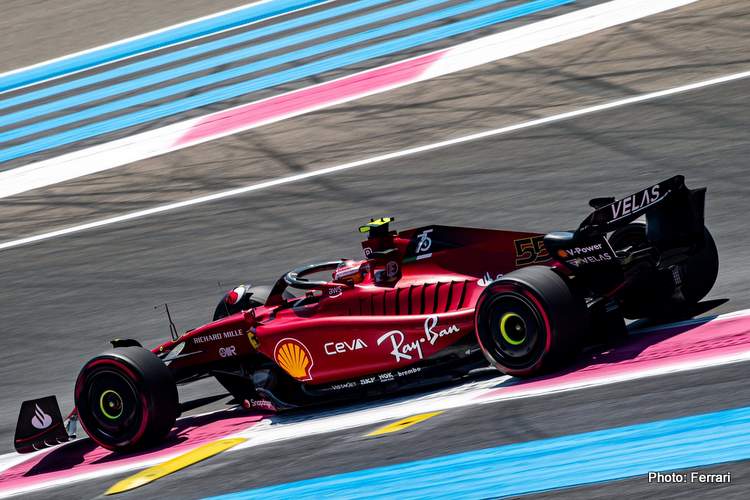 Carlos Sainz lead Charles Leclerc in a Ferrari one-two after FP2 for the 2022 French Grand Prix as Red Bull and Max Verstappen struggled to match them.

Sainz seemed to be the happier of the Ferrari pair as he lead the proceedings of FP2 on Friday afternoon at Le Castellet, as teammate Charles Leclerc was close behind in second.

Verstappen could not get into the rhythm with his RB18, suffering from understeer which no setup changes that Red Bull implemented could cure.

The Mercedes pair, George Russell and Lewis Hamilton followed in fourth and fifth, but drastically off the pace of the top three.

The high temperatures should be a factor at the Circuit Paul Ricard which should be challenging for power units, as the track temperature was in the mid fifties (Celsius) which should give the 18″ inch Pirellis a tough time as well.

Ferrari seemed in the zone after Charles Leclerc and Carlos Sainz were fastest and third fastest respectively at the end of FP1 for the 2022 French Grand Prix, will Red Bull – despite being very close with Max Verstappen – seem to have some more work to do.

Mercedes, however, seems to have fallen back instead of closing the gap to Ferrari and Red Bull as they would have hoped with more upgrades brought to their W13 this weekend.

The best placed Silver Arrow was that of George Russell who was fourth fastest in the first practice session on Friday, but almost one second off the pace.

The other Mercedes piloted by Nyck De Vries who was driving Lewis Hamilton’s car was ninth fastest 1.496s off the pace, a result team boss Toto Wolff was clearly not thrilled about.

Wolff told Sky Sports F1 after FP1: “Not where we want to be. We’re trying lots of parts but we’re just lacking pace right now in the free practice session.

“We have a few aerodynamic modifications on the floor and on the side edges, little things that should make it better.

“It’s just early days but the performance in FP1 was a bit underwhelming, we didn’t seen to extract enough out of it. So, we’re going to do some comparisons [in the second session] and see what it gives us in the afternoon,” he added.

Despite having the upgraded McLaren, Daniel Ricciardo was slower (tenth fastest) than Lando Norris (seventh fastest) who is set to try out the upgrades during FP2. A Ricciardo-related problem, or is the updated package not working yet?

As a note, McLaren have brought a new engine cover, new side pods, a new floor, and new diffuser.

Seven-time Formula 1 Champion Lewis Hamilton will be back behind the wheel at Mercedes for the afternoon session, as Valtteri Bottas will have his Alfa Romeo back from Robert Kubica.

The session started with the two Ferraris being worked on in the pits, while Hamilton – who missed FP1 – wasted no time and was soon out on track to make up for the lost track time.

Mick Schumacher has serious moment almost ten minutes into the session, as he lost his Haas at Turn 11, but was lucky to drive away avoiding the barriers.

A close call for Mick as he goes spinning off 🔄#FrenchGP #F1 pic.twitter.com/E91XDCxZYC

Charles Leclerc was out on track almost with about 50 minutes remaining from the session and went directly towards the top of the timing screens on his first timed lap.

Max Verstappen also took some time to get out on track, doing so after 15 minutes have passed, with his initial effort dislodging Leclerc from the top, as he went faster but by a mere 0.010s.

At some point, Verstappen reported understeer in sector one over the team radio, and return to the pits for some setup changes.

But it seems that nothing Red Bull did could sort out the problems on the reigning World Champion’s RB18, as he could not reduce the gap to the leading Ferraris.

Most teams set out on race simulation on high fuel loads and Medium tyres on the final 15 minutes of the session, which showed some drastic drop on the times of Leclerc, pointing at excessive tyre degradation for the Monegasque, while Verstappen was showing more consistent long-run pace.

George Russell has a moment towards the end of the session, and could not rejoin the track as per the Race Director’s notes, reporting to his team: “I couldn’t get back to the bollard…”

That was probably a message to the Race Director…

Carlos Sainz’s best effort yielded a lap time of 1:32.527 to go fastest, as Charles Leclerc was 0.101s behind on second place.

Max Verstappen could not get to the Ferrari pair and was a massive 0.550s off Sainz’s pace, in what seemed to be a troublesome session for the Dutchman.

George Russell was fourth fastest 0.764s off the pace, as Mercedes seem to be further down from the leaders this weekend, while Lewis Hamilton was fifth, 0.226s adrift from his teammate in the sister car.

That’s a wrap on FP2! All 👀 on Quali Day tomorrow. See you there team 💪 pic.twitter.com/1GyFjlqBvw

Lando Norris, running the updated MCL36 was sixth fastest but 1.080s off the pace, while Pierre Gasly was seventh in the AlphaTauri three tenths behind the Briton.

Kevin Magnussen was eighth fastest for Haas with a 1:33.928, 0.056s ahead of Daniel Ricciardo, ninth for McLaren.

Sergio Perez was in trouble, and far off his teammate, as he rounded off the top ten 1.533s away from the benchmark, which Christian Horner put down to “trying something slightly different” on the Mexican’s car.

Horner reflected on the team’s Friday: “They [Ferrari] have had a quick car all year and we can see they’re competitive again this weekend.

“We look competitive on the medium, soft and on the long run looked reasonably okay as well, it was only a five-lap long run but on the whole, a lot of information to take away from that session. 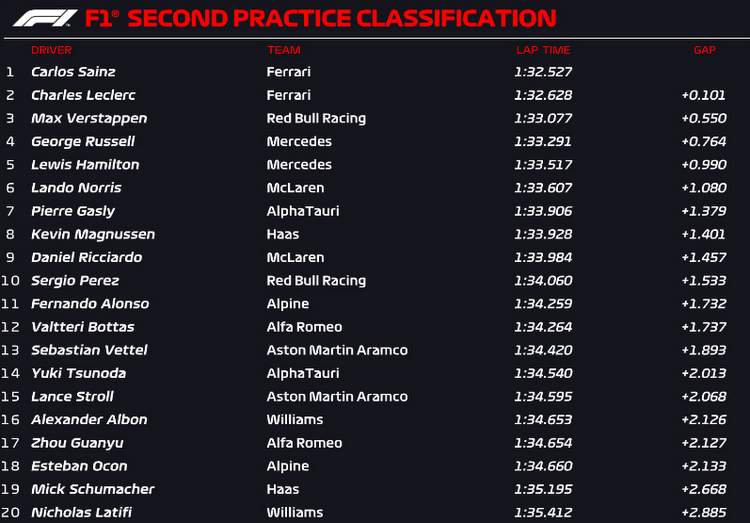