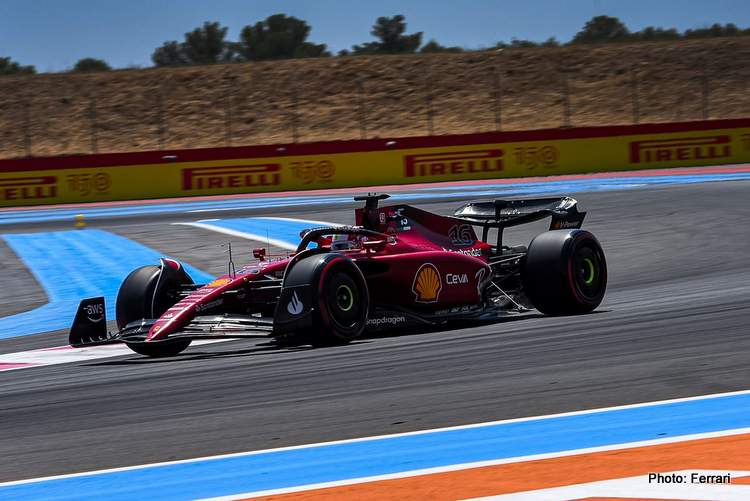 Charles Leclerc topped FP1 for the 2022 French Grand Prix at Paul Ricard, ahead of Max Verstappen as Lewis Hamilton watched the action from the Mercedes garage.

Leclerc was the only driver to go under 1:34 at the end of the session, but Verstappen was only 0.091s behind.

Carlos Sainz, who will receive a grid penalty for taking extra power unit components was third in the sister Ferrari, but over three tenths of the pace of his teammate.

Lewis Hamilton watched Nyck de Vries take to the Circuit Paul Ricard in his W13, as part of the mandated track time given to reserve and young drivers this season.

Formula 1 comes to France after a two-week break following the 2022 Austrian Grand Prix at the Red Bull Ring in Spielberg, that saw Ferrari’s Charles Leclerc win the race in a “not-so-straightforward” manner after suffering throttle pedal issues towards the end of the race as teammate Carlos Sainz retired with w burning power unit.

Red Bull suffered from excessive tyre degradation in Austria, so it would interesting to see how they fare in France, a place where Ferrari suffered with tyres in previous years, albeit in the previous generation of F1 cars.

Ferrari won in Silverstone with Sainz, and followed that up with Leclerc’s win at the Red Bull Ring, as Mattie Binotto claimed that a new rear wing has helped the F1-75 catch up with Red Bull’s RB18 on the straights.

Binotto told Sky Sports F1: “We had a disadvantage compared to the Red Bull, no doubt, in terms of straight line speed, especially in DRS zones.

“We worked a lot on it. We introduced a new rear wing, only on one car to start [for Leclerc in Canada] and then on both cars since the UK. And with that new rear wing, I think we simply reduced the gap.

“We have closed the gap we had in terms of speed. I think they still have got a slight advantage, but very little or negligible.

“In the power limited [corners], we are very close,” he added. “Then it’s only about the grip limited corners where we can make the difference.”

So the winning momentum is with Ferrari, and it will be up to Red Bull to find a way to stop that, keeping in mind that Max Verstappen win the race in 2021.

Mercedes continued their slow improvement, as Lewis Hamilton took third in Austria, his second consecutive podium after another third at his home race in Silverstone. Sainz retiring as as well as Sergio Perez being out of the picture helped the Briton’s race but there is now doubt Mercedes is improving.

Hamilton will contest his 300th grand prix this weekend and said he would be gunning for the win, so let’s see if that would be realistic, keeping in mind that he will be missing FP1 as Nyck de Vries, the team’s reserve driver will be at the wheel of the W13.

FP1 is underway! Where are we cheering the boys on from? 🌍 pic.twitter.com/UxGkXi2pCV

With the Circuit Paul Ricard being smooth, somehow similar to Silverstone, and with Mercedes bringing upgrades as well, will the Silver Arrow be in contention this weekend?

Robert Kubica was on driving duty for Alfa Romeo at the first free practice of the French weekend, taking over Valtteri Bottas’ car.

Pirelli brought their C2, C3, and C4 compounds to Le Castellet, sticking to the middle of their tyre range.

What are the compounds in action this weekend for the #FrenchGP? Look no further!
👇👇#F1 #Fit4F1 #Formula1 #Pirelli #Pirelli150 @F1 pic.twitter.com/svhVgzN1Zp

A quick look at some of the upgrades the teams brought to the French Grand Prix, with Red Bull having a heavily revised floor on their RB18, with Ferrari also having a new floor on their F1-75.

Mercedes has some upgrades as well, most noticeable being a new nose for the W13.

AlphaTauri have an extensive upgrade package on the AT03, including a new floor, ne engine cover, revised brake ducts, a new rear wing support… etc.

Early  into the session, Pierre Gasly reported an engine problem and dived into the pits for repair work, but was soon back on track testing his updated car.

Lando Norris who was on “foot-cam” duty as well in France reported early on in the session that he had a “weird” felling from his throttle pedal.

“The feeling of the throttle pedal is not right,” Norris said. “I think it’s OK it’s just a bit of a weird feeling.”

Leclerc also reported: “The turbo is a bit inconsistent. I don’t know if it’s normal or not,” during the session. At least it’s practice and not during the race.

Sergio Perez seemed to be exploring the limits quite early as he lost his RB18 at Turn 4, but keeps it out of the barriers, but destroyed his tyres with a massive flat spot, going back to the pits for a new set.

Checo gets in a spin as he gets to grips with Circuit Paul Ricard #FrenchGP #F1 pic.twitter.com/YzMQBsA05v

It was a drama free session, as the teams went along doing their programs with no major incidents to be reported in general.

George Russell was fourth for Mercedes, but almost a full second off the pace, with Pierre Gasly making good use of his updated AT03 to go fourth fastest, 0.098s further behind the Briton.

Sergio Perez set the fifth fastest time of the session, a 1:35.174, while Lando Norris was 0.058s behind the Mexican in sixth for McLaren.

Alex Albon was a surprise eighth for Williams, 1.484s off the benchmark time, while Hamilton’s replacement for FP1, Nyck De Vries was ninth fastest.

De Vries was over half a second slower that Russell in the other Mercedes, but ahead of McLaren Daniel Ricciardo who was tenth, 1.730s too slow.

Notably, none of the Alpine drivers featured in the top ten as Esteban Ocon was 13th fastest while Fernando Alonso was down in 15th. 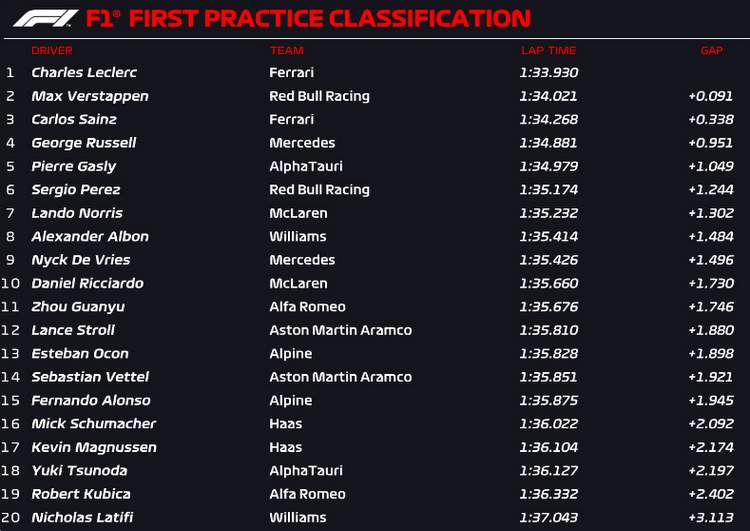