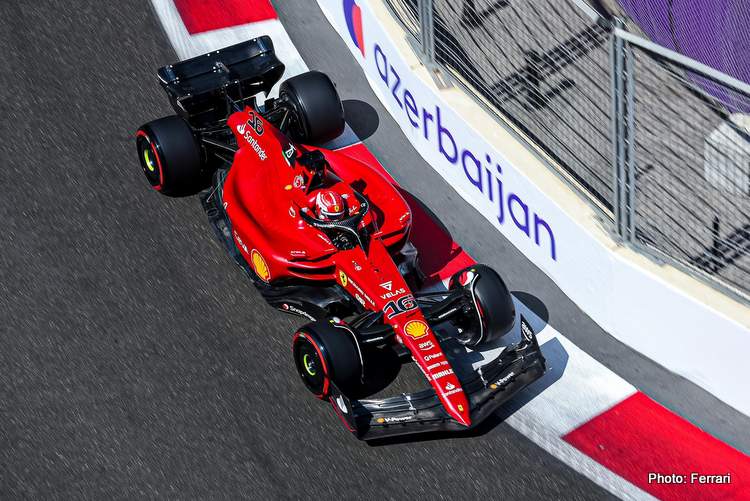 Charles Leclerc took a dominant pole position for the 2022 Azerbaijan Grand Prix, his sixth this year, with a dominant final lap blowing the competition away.

It was close between Ferrari and Red Bull as Qualifying progressed through its three stages, but in the end, Leclerc delivered one of his magical laps to take pole from Sergio Perez by almost three tenths of s second, 0.282s to be precise.

Max Verstappen was third with a 1:41.706, as Carlos Sainz took fourth in the sister Ferrari, 0.108s slower than the Dutchman.

What the top three said

A beaming Leclerc said after qualifying: “It feels good.

“This one, obviously all pole positions feel good, but this one I didn’t expect it because especially in Q1 and Q2 I really struggled to see that we were faster but it came together in the last lap and I managed to do a good lap so I am extremely happy.

“I am really excited tomorrow,” he added.

“Tyre management is a big thing here, in Barcelona and Monaco we were managing it well even though in Monaco it was difficult to see anything. But overall, our race pace has gone a step up since we brought the upgrades.

“Tomorrow will be very interesting whether it is the case ere too,” the Monegasque concluded.

Despite outqualifying his teammate for the second race in a row, Perez was disappointed, ruing an engine problem, and said: “When it got to Q3, it’s when you go full out.

“I hit the wall a couple of times but luckily we managed to survive, which is the key really here,” he revealed.

“It was not an ideal qualifying because at the end we had a problem with the engine and we couldn’t turn it on. So, I was basically on my own and that’s very powerful around here.

“Tomorrow it’s a very long race, we just have to make sure that we’re there. At any point you can make a mistake, so that’s it,” the Mexican concluded.

Third placed Verstappen added: “I think the start of the lap was good then it went away from me a little bit.

“Tiny mistakes but in general just struggling a bit to find front to rear balance over one lap so not of course what I want but still as a team in second and third we have a good opportunity for tomorrow.

“I think, overall, we seem to lack a tiny bit over one lap but clearly our car should normally be quite good,” the reigning Champion hoped.

With FP3 delayed by 15 minutes due to repair work done on the barriers at Turn 1 after being damaged by a crash in Formula 2’s Sprint Race, Qualifying had to follow suit and was postponed for 15 minutes as well, following the rule that two hours should separate both Saturday sessions.

FP3 gave us some food for thought as Sergio Perez continued with his Monaco form, while Max Verstappen seemed to come closer to his teammate in the final practice session. With traffic ruining his flying laps several times, the real pace of the Dutchman was only going to emerge in Qualifying.

Christian Horner told Sky Sports F1 ahead of qualifying: “It is tight (with Ferrari).

“I would put them ahead on single lap pace but we know we have a good race car so it is going to be about getting that one lap perfect, maybe getting lucky and having a tow at the end of it and hopefully not being held up in the middle of the lap.

“Unlike Monaco this is a very ‘overtakeable’ circuit. As long as you are in the first two or three rows you are in with a shout here,” he concluded.

Mattia Binotto on the other hand said: “I think they (Red Bull) will get on pole today.

“If I look at the relative competitiveness, in P3 they were very strong this morning, stronger than usual and I am expecting them to do a great Quali.

“Having said that, it will be very tight and we know things will change as it will be a lot cooler in the afternoon than the morning.

“Driver confidence will be key, let’s try to build a lap time and we will certainly do our best,” he concluded.

Behind the top four, George Russell was best of the rest, and took fifth for Mercedes albeit while being 1.353s off the pace.

Pierre Gasly was strong sixth in the AlphaTauri with a 1:42845, as Lewis Hamilton took seventh in the other Silver Arrow.

Hamilton was over two tenth slower than his teammate as he struggled yet again to get on top of his W13, as he reported that his car’s bottoming down was getting dangerous at one point.

P5 for George and P7 for Lewis on the #AzerbaijanGP grid! Plenty of opportunity, tomorrow! 💪 pic.twitter.com/EGnelR35DY

Yuki Tsunoda will line up eighth for Sunday’s race, over 1.7s off the pace of the pole sitter, on a good day for AlphaTauri, putting both cars in the top ten.

A decent result for both Champions, as both their teammates got knocked earlier in the session. 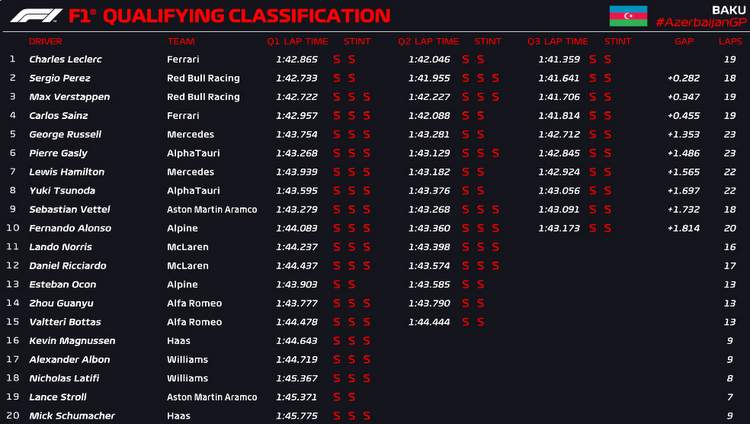 The drivers started pushing the limits in the second part of qualifying, with Leclerc, Perez, and Versrappen coming agonizingly close to the walls but getting away with it.

With almost seven minutes remaining in Q2, Sebastian Vettel brought out a a brief Yellow flag as he ended up in the barriers at Turn 15, as the German reported an issue with his Brake-by-Wire system.

Vettel hits the barriers at Turn 15 💥

The German has reversed out and returned to the pits for repairs#AzerbaijanGP #F1 pic.twitter.com/OS8yai0Bka

In the dying moments of Q2, Lando Norris and Yuki Tsunoda brought Yellow flags in a row, Norris going off at Turn 15, while Tsunoda had a huge lockup at Turn 1.

The Stewards announced that Hamilton was under investigation for driving too slowly on his outlap.

Nevertheless, first of the drivers to lose out on a Q3 appearance was Lando Norris who was 11th fastest, his error on his final hot lap proving costly.

Daniel Ricciardo was 12th fastest, again failing to reach Q3, but at least he was right behind his teammate this time, only 0.176s slower than the Briton.

The Alpine of Esteban Ocon will start tomorrow’s race from 13th, as Alfa Romeo’s Zhou Guanyu will line up behind him in 14th. 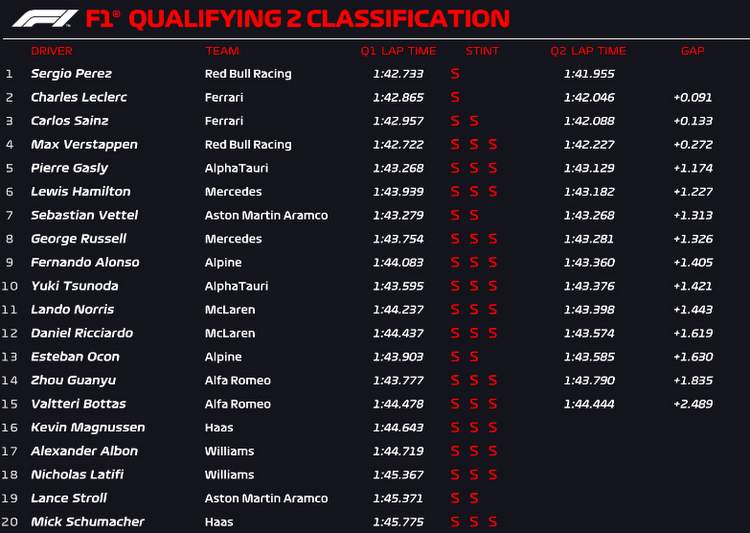 Q1 got Red flagged with two and a half minutes remaining on the clock when Lance Stroll understeered into the barriers at Turn 2, breaking his front right suspension, and front wing, keeping in mind that he survived a shunt at Turn 7 earlier. Not so lucky the second time around.

Stroll has hit the barriers at Turn 2#AzerbaijanGP #F1 pic.twitter.com/41gz31FQdp

It was messy as the cars took to the track after the track was green lighted, with drivers squabbling to reach the start/finish line for a final shot to get out of Q1.

When Q1 was done, Kevin Magnussen was the first driver to lose out, as he qualified  15th, ahead of Alex Albon in the Williams who was 17th fastest, 0.076s and behind the Dane.

Nicholas Latifi was 18th in the other Williams, as Stroll was 19th, as the lap time of 1:45.371 that he registered before his crash warranted that.

Mick Schumacher was dead last in the other Haas, with a 1:45.775 being the best he could muster.

Alonso, who made it into Q2, caused a Yellow flag in final seconds of Q1, overshooting his braking point at Turn 15, affecting Albon. 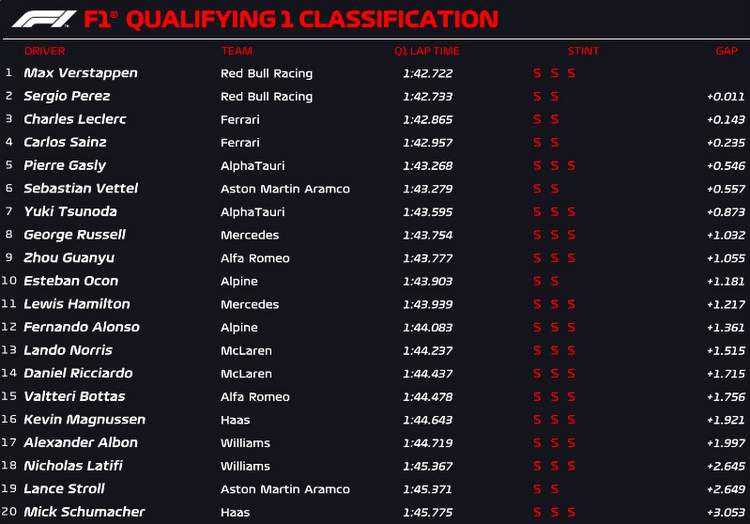