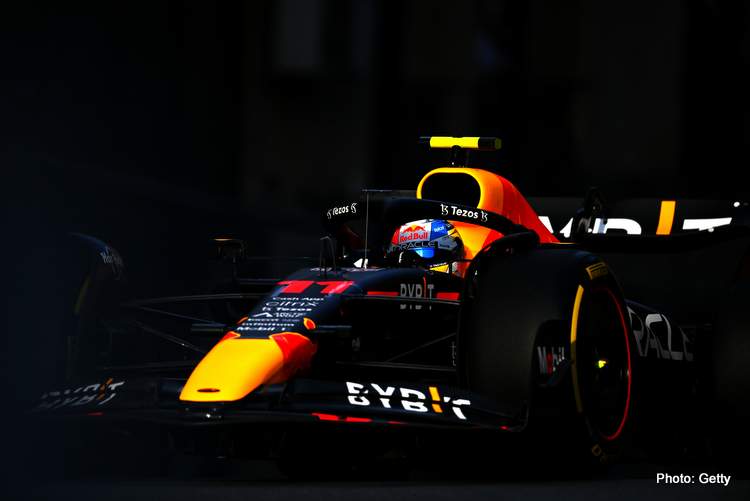 Sergio Perez returned to the top at the end of FP3 in Baku, fastest of all, and setting himself up nicely for qualifying as Charles Leclerc chased him hard.

Max Verstappen looked in a position to overhaul Perez in FP3, but it was the Mexican who was able to set the fastest time at the end of the final practice session, with Charles Leclerc breathing down his neck.

Verstappen had to settle for third, as Carlos Sainz took fourth.

The final practice session in Baku, for the 2022 Formula 1 Azerbaijan Grand Prix, comes on the back of an interesting Friday, as despite Ferrari retaining their edge in terms of one-lap-pace, they and Red Bull were evenly matched on the long runs, at least that’s what Friday showed us.

The rest of the grid was somehow mixed up as Fernando Alonso emerged as best of the rest, a position usually occupied by McLaren’s Lando Norris or Mercedes George Russell.

Both however where nowhere near, as Norris was left languishing in the bottom part of the top ten, while Russell despite hovering around the seventh/eighth fastest position was left ruing a viciously Mercedes on Friday, which will probably mean performance sacrifice in order to dampen the bouncing.

Sergio Perez is the faster of the Red Bull drivers yet again, as Max Verstappen was slower than the Mexican on Friday, however the Dutchman could not get a clean run due to traffic, so maybe he still has some time in him.

FP1 and FP2 saw many drivers going off, and taking to run-off areas, none suffering from damage big enough to reduce the running, so will all 20 drivers remain lucky on Saturday, or is there a huge shunt waiting to happen somewhere?

The start of FP3 was delayed for 15 minutes, as the barriers at Turn 1 were under maintenance following a crash in the final lap of the Formula 1 Sprint Race.

The barrier at Turn 1 is currently being repaired#AzerbaijanGP #F1 pic.twitter.com/fjP8Au6Bj0

Delaying FP3 by 15 minutes might also mean that qualifying will also be delayed by the same amount of time, to make sure that the two-hour space between the final practice and qualifying stipulated by the rules is respected.

The session started with Aston Martin’s Lance Stroll being the first driver to hit the track, followed by teammate Sebastian Vettel.

While Friday was quite windy around the Baku City Circuit, the wind seems to have faded out on Saturday, as FP3 was green lighted.

The teams took their time in exiting the garages, as with ten minutes elapsing from the session, only Aston Martin, Mercedes and Haas made an on-track appearance.

Onboard footage from Lewis Hamilton’s Mercedes shows that the car is still bouncing quite hard on the straights, as the seven-time World Champion reporting through the session that he is lacking rear-end grip on his W13.

Lewis Hamilton’s car still seems to be shaking just as it was yesterday’s FP1 👀 pic.twitter.com/fekcFhTZnI

Max Verstappen’s DRS seemed to be behaving itself during FP3, which means whatever the Red Bull engineers and mechanics came up with since Friday fixed the problem.

With 20 minutes remaining on the clock, most cars were back into their garages for final changes tryin to find that perfect setup for qualifying and the race.

With Baku being a track that requires a delicate balance between top speed and downforce, check out which of the drivers was the fastest through the speed trap. 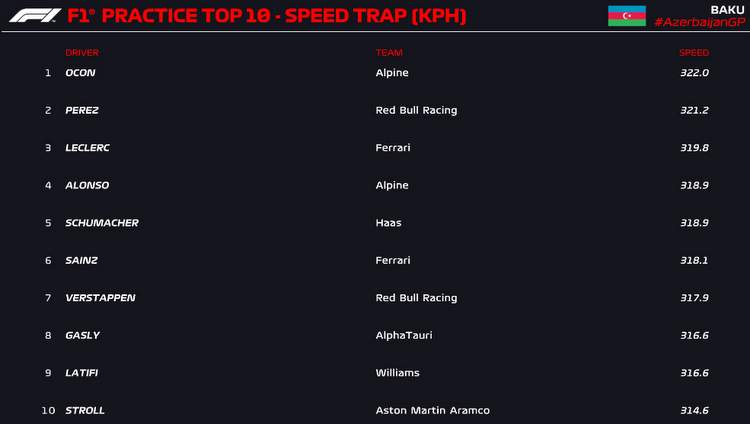 With 12 minutes remaining in the session, Alfa Romeo’s Valtteri Bottas went off track at Turn 3, bringing out the Yellow flag, just when Verstappen was getting ready for his flying lap.

Charles Leclerc has a moment of his own at Turn 15, with five minutes to go, heading to the run-off area, but returning swiftly to the track. The Yellow flag he caused lasted mere seconds.

It was a 1:43.170 that Perez on top at the end of FP3, while Charles Leclerc who went off at Turn 15 while attempting to improve his time was second a mere 0.070s slower.

Max Verstappen was also on a good lap in the dying moments of the final practice, setting a first purple sector, but had to back off because of traffic. We cannot be sure if he would have gone fastest, but his registered best time was only good for third, 0.279s off the pace.

Carlos Sainz continued to lag behind his teammate, and was fourth fastest, a worrying 0.426s off the pace.

Ferrari continued to be fast, but their F1-75 continued to have considerble bouncing, as the onboard footage from Leclerc showed.

Lando Norris regained his best-of-the-rest status, going fifth fastest, but a whopping 1.248s down from the top, as Daniel Ricciardo was a surprising and welcome sixth, only 0.058s behind his teammate.

Pierre Gasly continued AlphaTauri’s strong form and was seventh with a 1:44.491, just 0.082s ahead of George Russell, eighth in the Mercedes W13.

Esteban Ocon was ninth for Alpine 1.515s off the benchmark time, as Fernando Alonso was only 11th in the sister pink and blue car, the Spaniard 0.157s slower than the Frenchman.

Sebastian Vettel split the Alpine pair to take tenth for Aston Martin, the German an agonizing 0.004s adrift from Ocon.

Lewis Hamilton was only good for 12th 1.675s off the top time clocked by Perez. 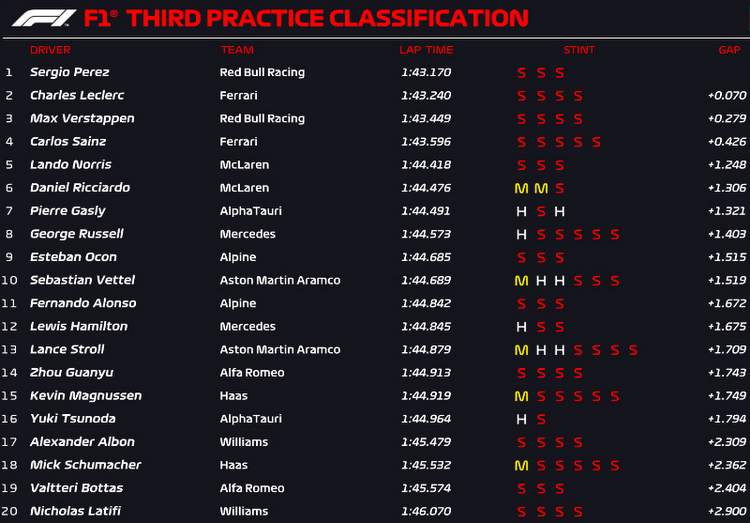