Hamilton: Hoping by Silverstone we have the car where we need it 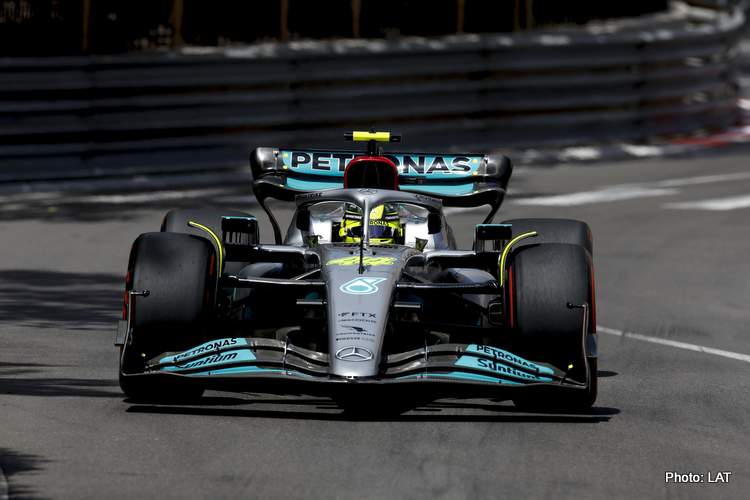 Lewis Hamilton said Mercedes are working to fix their 2022 Formula 1 car, the W13, and hopes to have it where they need it to be by Silverstone, his home Grand Prix.

The 2022 Spanish Grand Prix in Barcelona was a “mini-eureka” moment for the eight-time Constructors’ Champions, as they seemed to have almost eradicated the bouncing issue that has impaired their 2022 Silver Arrow, the W13.

In Monaco however, they didn’t confirm that their problems are gone, as they were less competitive again, but Hamilton said in the press Monaco press conference that he was hoping to have the cat sorted by the time of his home race, the British Grand Prix in Silverstone in July.

“I’m hoping by then, we are where we plan to be,” Hamilton told the media about the Silverstone deadline. “I know everyone back at the factory is working as hard as they can, to continue to make advances with the car and I have no doubts that that we will.

“And yeah, I’m hoping by Silverstone we have the car where we need it, at least by then, to be able to fight these guys for the win.

“That’s what I’m working every day for, is so that we can fight on home turf, and give them the best race we can,” the Briton revealed.

Many believe that it would be a good idea for Mercedes to ditch their 2022 car and start working on their 2023 challenger from now.

Hamilton isn’t so sure that is a good idea, and was  quoted by Mundo Deportivo saying: “Really, I haven’t thought about that.

“I think we need to find out what’s wrong with this car before we can make another car. If we were to start making another car we could easily get it wrong,” the seven-time World Champion believes.

“I think it’s about understanding this fully, which we haven’t done yet, and giving us a path to where to go,” he insisted.

“There are definitely a lot of things I wouldn’t want from this car in next year’s car, so I’ve already included them,” Hamilton added.

Mercedes boss Toto Wolff the team is yet to decide if the current concept is belongs in the trash, as they are yet to reach that stage of decision making.

“At a certain stage, if we still don’t manage to close that gap…we need to continue to just grind away,” he began. “And then, if decisions for next year need to be taken that can’t be changed on the current car, whether that is architecture or aerodynamically, these decisions need to happen.

“But we are not at that point,” he declared, adding: “If you want to change concept, you need to understand what is going to make the new concept faster than the current one.”

Hamilton has notably struggled with the W13 more than his teammate George Russell who is able to extract more performance out of the car.