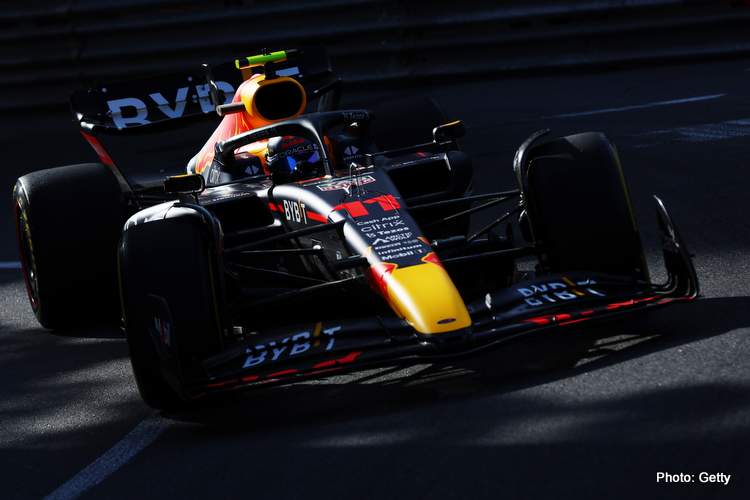 Sergio Perez pipped Charles Leclerc and went fastest at the end of FP3 in Monaco by the slightest of gaps, while Max Verstappen continued to struggle.

Red Bull seemed to have managed to close the gap to Ferrari on Saturday, a Sergio Perez was fastest in the final practice session ahead of Charles Leclerc by the tiniest of Margins, which sets things up nicely for qualifying.

Carlos Sainz was as Max Verstappen continued to struggle and was only good for fourth.

The Formula 1 activities resumed on Saturday in Monaco for FP3, the final practice session where the teams and drivers will have their final preparations ahead of the all-important qualifying shootout.

Qualifying gains more importance around the principality due to the race being a procession, mostly decided by the starting grid.

Ferrari basically owned Friday in Monaco, with Charles Leclerc going fastest in both practice sessions, while Carlos Sainz was second fastest in the afternoon.

Christian Horner said: “Ferrari look strong here. If we can’t win, we need to limit the damage. But our focus is to try and take them on in today’s qualifying.”

Sergio Perez who split the Ferrari pair in FP1, was surprised by the gap of over three tenths that the Reds pulled out in FP2, while his teammate, reigning F1 Champion Max Verstappen was slower all day in the sister Red Bull fourth fastest in both sessions.

Verstappen not confident yet

“Max Verstappen has not found the confidence yet,” says Rosberg to Sky Sport F1. “He has been a bit off and you can see it in the brakings where he is losing even to Perez.

“He can’t commit and doesn’t understand where the limit is and that is going to play a big role because in P3 they need to get that confidence all of them,” Rosberg added.

Can Verstappen find his feet during FP3? His boss, Horner, said: “Yesterday I think we didn’t have an optimum set up and in the morning they were a little happier than in the afternoon session

“There was a lot of work last night with the engineering teams, made a few little changes for today.

“This track is a confidence track and you need to give your drivers confidence here,” the Briton insisted.

Mercedes struggled with bouncing, but not aero-related this time, since the new F1 cars are being running with stiff suspension settings, and as low to the track as possible to maximize downforce. Can the World Champions find the right balance between performance and ride comfort? Or will Lewis Hamilton require more paddings?

Daniel Ricciardo crashed heavily in FP2 missing most of it and giving his mechanics the big job of re-building his MCL36 in time for Saturday’s running. Things look grim for the smiley Aussie, but will he bounce back?

Daniel Ricciardo headed our early to make up for the time lost in FP2 on Friday, as Fernando Alonso was the first to go fastest in the Alpine, but the Ferraris and Red Bull’s soon after assumed their normal positions at the top with Leclerc leading for some time.

Sergio Perez took the lead, 25 minutes into the session, as the Mexican remains more confident around the streets of Monaco than Verstappen.

The third practice session also saw drivers missing their braking, with Lance Stroll took a “stroll” down the run off area at Sainte Devote bringing up a brief  Yellow flag.

Carlos Sainz also had a massive lock up in the same place halfway through the session, and aborted his run heading directly back to the pits.

Lewis Hamilton continued to struggle with the bouncing of his W13, and when the team informed him he was 1.2s off the best time after his timed lap, the Briton said: “Where is the 1.2s, don’t know where that is…”

Traffic was an issue with many drivers complaining about it, the most high profile being a moment between Sainz and Sebastian Vettel at Turn 3.

Verstappen had a moment as well with Alfa Romeo’s Zhou Guanyu at Turn 14, while the Dutchman was on his flying lap. A radio message with an abundancy of expletives from Verstappen made his feelings clear.

Both incident were noted by the Stewards for investigation later.

A rough session for Stroll who made contact with the wall at the Swimming Pool, bouncing over the kerb and clipping the wall – damaging his front wing.

💥 Stroll slides into the wall…

But he’s able to keep on going and heads straight for the pits 🛠#MonacoGP #F1 pic.twitter.com/Nv8V4S60Co

Perez just seems to be enjoying Monaco in his RB18, as he registered a fastest lap of 1:12.476, the fastest of FP3, as Leclerc slotted behind him in second, 0.041s slower.

Sainz was a whopping 0.370s off the pace in third, while the struggling Verstappen took fourth, 0.035s further behind the Spaniard.

Worth noting that Verstappen could not really get a clean run during the traffic-marred session, so does he have a chance to bounce back in qualifying?

Pierre Gasly was best-of-the-rest in the #10 AlphaTauri, fifth fastest, but over seven tenths slower than Perez’s session-topping time.

things are heating up right before Quali! 🔥

ending practice in Monaco in a strong position 💪 pic.twitter.com/ZQkNNkBwox

Lando Norris continued to run strong for McLaren and was sixth fastest, a painful 0.016s behind Gasly. His teammate Daniel Ricciardo was down in 16th.

Lewis Hamilton was the faster of the Mercedes pair despite his un-comfort in the W13, and registered the seventh fastest time of FP3, a 1:13.375, while George Russell was ninth fastest a tenth slower than his teammate.

Kevin Magnussen split the Mercedes pair to take eighth but 0.960s off the ultimate pace.

Fernando Alonso was tenth fastest for Alpine, the Spaniard over a second away from the benchmark time.

Aston Martin dropped out of the top ten as Sebastian Vettel was only good for 13th, after featuring in the top ten in both Friday practice sessions. 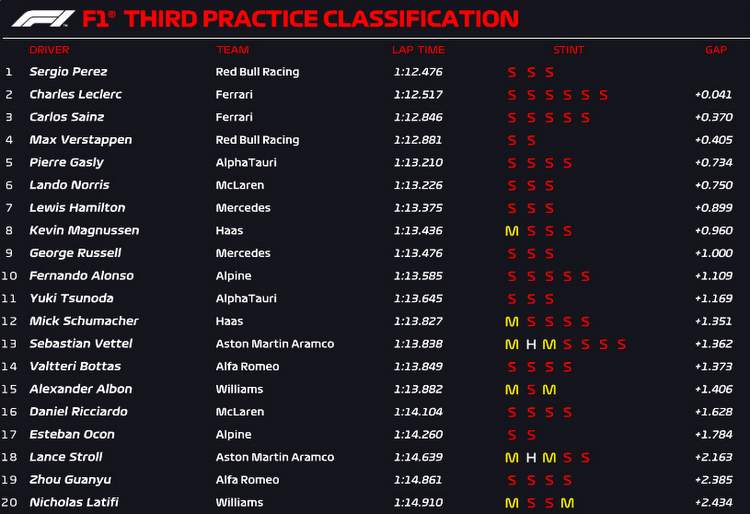