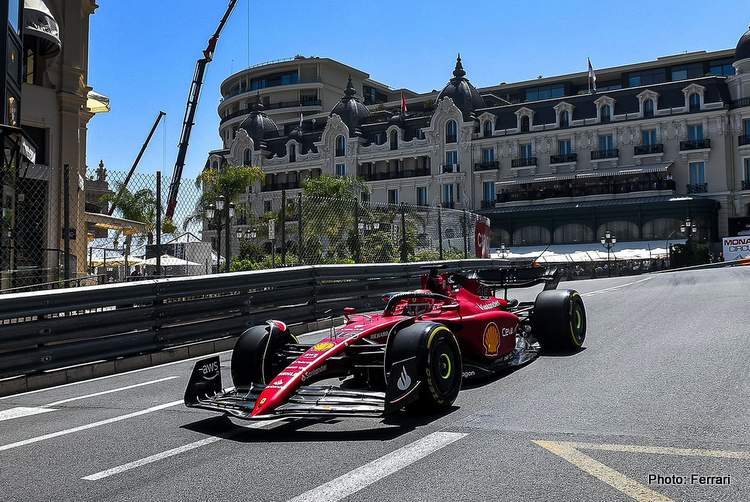 Charles Leclerc had a promising start for the 2022 Monaco Grand Prix, as he put his Ferrari at the top of the timing screens at the end of FP1 on Friday at home.

The Ferrari ace started his race weekend at home strongly as he went fastest at the end of FP1 for the Monaco Grand Prix, with Sergio Perez a close second, while Carlos Sainz took third.

P1 and P3 in #FP1. Time to analyse that data and keep improving 📊#essereFerrari 🔴 #MonacoGP pic.twitter.com/xFXq0RKkhM

Formula 1 was back the at Monaco Grand Prix, the sports Crown Jewel, but with a new look, as the new for 2022 F1 cars took to the track around the Mediterranean principality for the first time, as we look to get the first glimpse of how the ground-effect cars go around it’s tight streets.

Local hero Charles Leclerc will be in the spotlight this weekend, as he looks to break his jinx at his home race, maybe go for the win this time, and put the disappointment of 2021 behind him once and for all.

He has got the car and the skills, bit just maybe needs some luck.

Nico Rosberg, the 2016 F1 Champion told Sky Sports: “Leclerc is driving like a future world champion at the moment. In Barcelona it was Leclerc who was absolutely dominant, and as a result the championship is totally open.

“But I do expect Leclerc to be the favourite here,” Rosberg predicted.

Leclerc lost the Drivers’ Championship to Max Verstappen in last week’s Spanish Grand Prix with a DNF, and will be looking to halt the reigning World Champion’s momentum, having won three races in a row now.

Mercedes will be another team to watch out for, as the eight-time Constructors’ Champions had a strong outing in Barcelona, so it will be interesting to see if their resurgence continues in Monaco.

Early in the session, Lewis Hamilton delivered a worrying message to his team over the radio saying: ‘There’s an incredible amount of bouncing.”

Definitely not what the team wanted to hear…

Later on in the session, the seven-time Champion reported on the problem saying: “Yeah the bouncing is crazy mate!”

Leclerc had a moment at the first corner, 15 minutes into the session, as he took to the run-off area, bringing out the Yellow flags, briefly though.

Mick Schumacher reported gearbox problems to his team 20 minutes into the session, after which the German came to a halt blocking the entrance of the pit lane, bringing out the Red flags.

Schumacher is stranded at the pit lane entry following an issue with his car#MonacoGP #F1 pic.twitter.com/fLZlOGY9uN

The #47 Haas was cleared from the pit lane entrance and the session was green-lighted with 36 minutes remaining on the clock. Schumacher did not do any further running in the session.

Max Verstappen also had a moment at Turn 1 as he locked up, and ended up in the run-off area with no damages, just after setting the fastest time of the session at the 45-minute mark.

Verstappen slots it into P1 💪

But then heads down the escape road at Sainte Devote 😅#MonacoGP #F1 pic.twitter.com/WuKgbAtQ2H

Leclerc however soon took the top spot from Verstappen soon after that, while Haas’ Kevin Magnussen had a moment of his own at Turn 1 badly flat spotting his tyres.

“No heroics into Sainte Devote, Bulls” 😅😬

Valtteri Bottas did not even set a time during FP1 as he was confined to the team garage due to a technical problem.

Lots of work ongoing on Valtteri’s car. A technical issue for him means we have to remove the rear end to investigate 😭 #MonacoGP

The best recorded in the session, courtesy of Charles Leclerc was a 1:14.531, but Sergio Perez was very close behind in second just 0.039s slower.

Carlos Sainz was 0.031s further down the road in third, as Max Verstappen took fourth 0.181s off the pace of the leader.

Lando Norris was a strong fifth for McLaren but over half a second slower than the top time, while Gasly was sixth in the AlphaTauri, the Frenchman 0.0027s slower than the Briton.

The second McLaren of Daniel Ricciardo was seventh, with the Australian 0.101s off the pace of his teammate, but in the top ten nevertheless.

George Russell was the best of the Mercedes pair, as Lewis Hamilton struggled with bouncing all session long. Russell was eighth fastest with a 1:15.211

Sebastian Vettel had a promising start for the weekend, and was ninth fastest in the revised Aston Martin 0.856s off the best time set by Leclerc.

Lewis Hamilton rounded off the top ten 0.968s from the top, as Mercedes seem to have worryingly returned to their bouncy ways.

P8 and P10 for George and Lewis, battling with bouncing around the bumpy Monte Carlo streets. pic.twitter.com/wWJWlOroWK

Both Alpine cars were notably out of the top ten with Fernand Alonso 13th fastest and Esteban Ocon three places further down the grid in 16th. 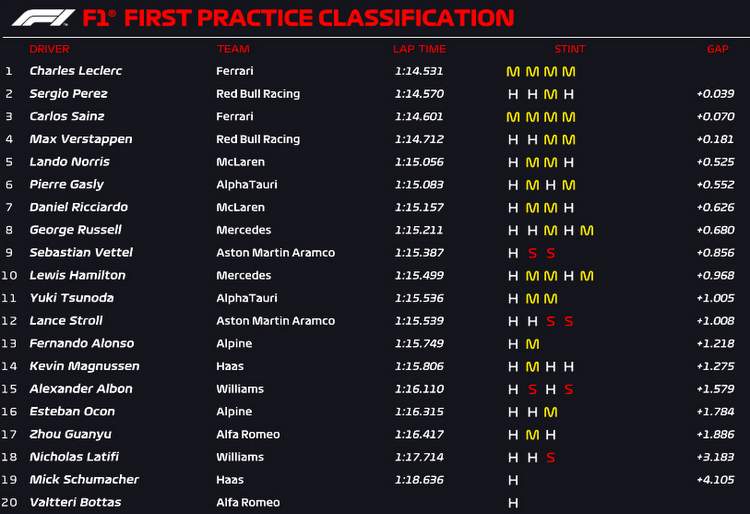