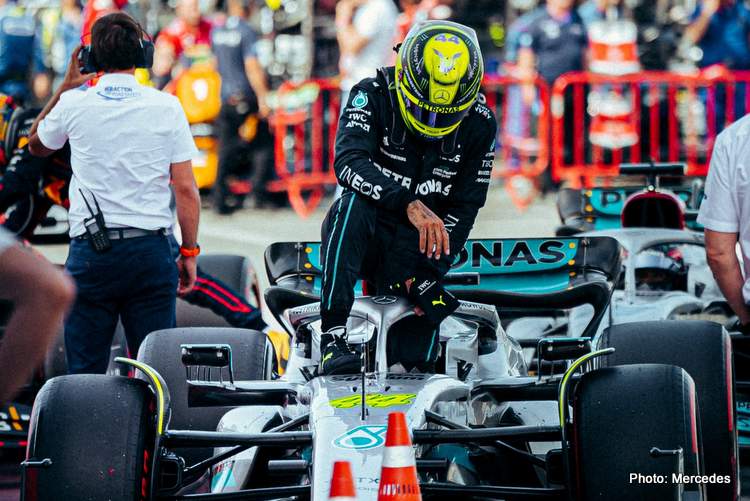 Martin Brundle revealed he was alarmed when he heard Lewis Hamilton call-in his team to retire the car after his clash with Kevin Magnussen at the 2022 Spanish Grand Prix.

Lewis Hamilton had a puncture on Lap 1 of Sunday’s Spanish Grand Prix courtesy of an over optimistic Kevin Magnussen, after which the Briton was relegated to the back of the grid some 50 seconds down on the race leaders.

Hamilton then radioed his team to retire the car and save the new power unit he had bolted to his W13, only for his team to refuse and ask him – an inspired decision by the way – to carry on.

Former Formula 1 driver Martin Brundle was baffled by Hamilton’s demeanor and said in his Sky Sports F1 column: “Lewis’ contact with Kevin Magnussen on the opening lap surely cost him a chance of a spectacular result.

“He was 50 seconds behind the leader on lap two and 54 seconds at the end despite backing off by four seconds on the final tour.

“Lewis’s radio call-in after falling to the back of the field with a puncture, basically wanting to stop and ‘save the power unit mileage’, was alarming,” the pundit insisted. “It gave us the true picture of how little he’s been enjoying this season.

“Presumably 65 laps later he was somewhat more satisfied after showing great pace,” Brundle pointed out lauding the fans for voting Hamilton Driver of the Day.

Mercedes had a great race in Barcelona, with George Russell taking third position after an epic duel with Red Bull’s Max Verstappen, despite the latter’s DRS troubles on the day.

Brundle said it was “fascinating to witness” the Dutchman’s “first proper wheel-to-wheel battle with Russell” who he believed was “defending robustly but fairly, and very well”.

The 62-year-old added: “I happened across the race stewards on Sunday evening and they were of the same opinion that George was pushing the boundaries but not breaking the rules.

“And his run back past Max between the very short turns one and two will be played out for a good while,” he maintained.

The veteran of 158 grands prix praised Verstappen for keeping his battle with Russell within the proper boundaries, and said: “Once again Max was very clean and fair in this enduring battle, more so than when he was against Hamilton last year, which is more fitting of a champion.

“But of course the championship is not up for grabs yet,” he remarked.