Hamilton: I was thinking it’s impossible to get points 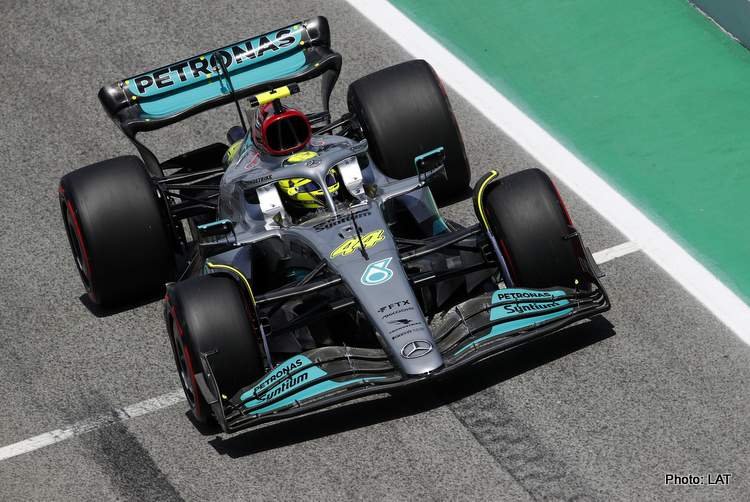 Lewis Hamilton survived an early puncture to finish the 2022 Spanish Grand Prix fifth, but admitted he thought scoring points would be impossible.

Hamilton had a puncture on the opening lap of the race, courtesy of an overzealous Kevin Magnussen, and was relegated to the back of the grid after pitting for a new set of tyres.

At that point, Hamilton called on his team to retire the car and save the engine, sounding defeated, which was a bit of a shocking statement from the seven-time Formula 1 World Champion who is known for his “never-give-up” attitude.

Luckily, Mercedes disagreed with their driver and he went on to deliver one of his most impressive drives to take fifth, when fourth was on the cards had it not been for a water leak causing his W13 to overheat, forcing the Briton to back down, to be overtaken by Ferrari’s Carlos Sainz.

Hamilton was confronted by the media after the race with his radio message, and was asked if he was feeling defeated at that moment.

He responded: “It’s not being defeated, it was just I was literally 30 seconds behind, so why, if I’m going to use a whole engine to drive around in last or out of the top 15, and at one point we might have to take a penalty or something like that.

“I don’t know if reliability is an issue, we won’t know until, well we’ve already seen today at the end there was something,” he said of his late-race cooling issue.

“I was like we might as well just save the engine so we live to fight another day. But I’m glad we didn’t, and it just shows you never stop, you never give up, and that’s what I did.

“I’m so happy,” the Briton added. “Obviously I was hoping for a smoother race without the issue at the beginning of the race. And I was 30 seconds behind at one stage, behind last.

“And having seen where I was, and if you think back to Jeddah where I started 15th and I struggled to get into the top 10, I was thinking it’s impossible to get back into points position,” the Mercedes ace admitted.

“But the team said no, you’re on for eighth. I couldn’t understand it at the beginning, and I thought they were definitely being super optimistic. But I said OK, I’ll give it everything and see where I come out.

“And it turns out it was higher than eighth. So it’s just a little bit unfortunate at the end with the engine, but I’m just glad we finished,” the 37-year-old said.

Grateful to Mercedes for keeping head down

Later Mercedes’ post-race report, Hamilton paid tribute to his team for pushing him to continue, and said: “I’m just really grateful that I was able to come back and grateful to the team for keeping their head down and for all the amazing work to get us to this improvement.

“The car felt great in the race, our pace is closer to the top guys which is amazing,” he added. “It’s a lot hotter than predicted today and for everyone it’s quite tough with these cars. I had to basically drive at half throttle at the end to try and cool the car, with lots of lifting down the straight just to get fresh air into the engine to cool it down.

“I was so gutted to lose the place to Sainz, especially after coming from where I came from,” Hamilton revealed.

“We do still have bouncing but not in the straight line, it’s through corners but no way near as bad as we had before,” he pointed out. “The guys are working really hard and I am sure we can fix that over time.

“If I didn’t have that issue at the beginning, who knows where we’d have been at the end. It’s good to know we have similar pace to some of the front runners,” the six-time winner around the Circuit de Barcelona-Catalunya concluded. (Additional reporting by Agnes Carlier)